The following account of a Mine of Frogs is related by Dr. Williams, of the state of Vermont, in America:—

“There are several accounts in natural history of toads being found in the hearts of trees, and in solid rocks, wholly enclosed and shut up from the air and all appearance of food, and being taken alive out of such situations. In the Memoirs of the Academy of Sciences there is an account, that, in the year 1731, a toad was found in the heart of an old oak, near Nantz, without any visible entrance to its habitation. From the size of the tree, it was concluded, that the toad must have been confined in that situation, at least eighty or a hundred years.

We have several instances in Vermont, equally extraordinary. At Windsor, a town joining to Connecticut river, in September 1790, a living frog was dug up at the depth of nine feet from the surface of the earth. Stephen Jacobs, Esq. from whom I have this account, informs me, that the place where this frog was found, was about half a mile from the river, on the interval lands, which are annually overflowed by its waters.

At Castleton, in the year 1779, the inhabitants were engaged in building a fort near the centre of the town. Digging into the earth five or six feet below the surface, they found many frogs, apparently inactive, and supposed to be dead. Being exposed to the air, animation soon appeared, and they were found to be alive and healthy. I have this account from General Clarke and a Mr. Moulton, who were present when these frogs were dug up. Upon viewing the spot, it did not appear to me that it had ever been overflowed with water, but it abounded with springs.

A more remarkable instance was at Burlington, upon Onion river. In the year 1788, Samuel Lane, Esq. was digging a well near his house. At the depth of twenty-five or thirty feet from the surface of the earth, the labourers threw out with their shovels something which they suspected to be ground-nuts, or stones covered with earth. Upon examining these appearances, they were found to be frogs, to which the earth every where adhered. The examination was then made of the earth, in the well where they were digging; a large number of frogs were found covered with the earth, and so numerous that several of them were cut in pieces by the spades of the workmen. Being exposed to the air, they soon became active; but, unable to endure the direct rays of the sun the most of them perished. This account is from Mr. Lane, and Mr. Lawrence, one of the workmen, who were both present when the frogs were dug up. From the depth of earth with which these frogs were covered, it cannot be doubted but that they must have been covered over in the earth for many years, or rather centuries. The appearances denote that the place from whence these frogs were taken, was once the bottom of a channel or lake, formed by the waters of Onion river. In digging the same well, at the depth of forty-one feet and a half from the surface, the workmen found the body of a tree eighteen or twenty inches in diameter, partly rotten, but the biggest part sound. The probability is, that both the tree and the frogs were once at the bottom of the channel of a river, or lake; that the waters of Onion river, constantly bringing down large quantities of earth, gradually raised the bottom; that by the constant increase of earth and water, the water was forced over its bounds, forming for itself a new channel or passage in its descent into Lake Champlain.

How vigorous and permanent must the principle of life be in this animal! Frogs placed in a situation in which they were perpetually supplied with moisture, and all waste and perspiration from the body prevented, preserve the powers of life from age to age! Centuries must have passed since they began to live in such a situation; and had that situation continued, nothing appears but that they would have lived for many centuries yet to come. 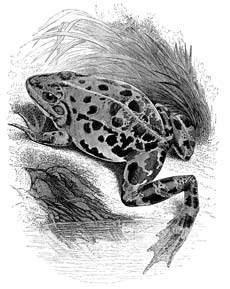