As soon as his eyes could bear the light he went home, but fainted on the threshold. When he came to himself he told his mother what had passed, and showed her the lamp and the fruits he had gathered in the garden, which were in reality precious stones. He then asked for some food. “Alas! child,” she said, “I have nothing in the house, but I have spun a little cotton and will go and sell it.” Aladdin bade her keep her cotton, for he would sell the lamp instead. As it was very dirty she began to rub it, that it might fetch a higher price. Instantly a hideous genie appeared, and asked what she would have. She fainted away, but Aladdin, snatching the lamp, said boldly: “Fetch me something to eat!” The genie returned with a silver bowl, twelve silver plates containing rich meats, two silver cups, and two bottles of wine. 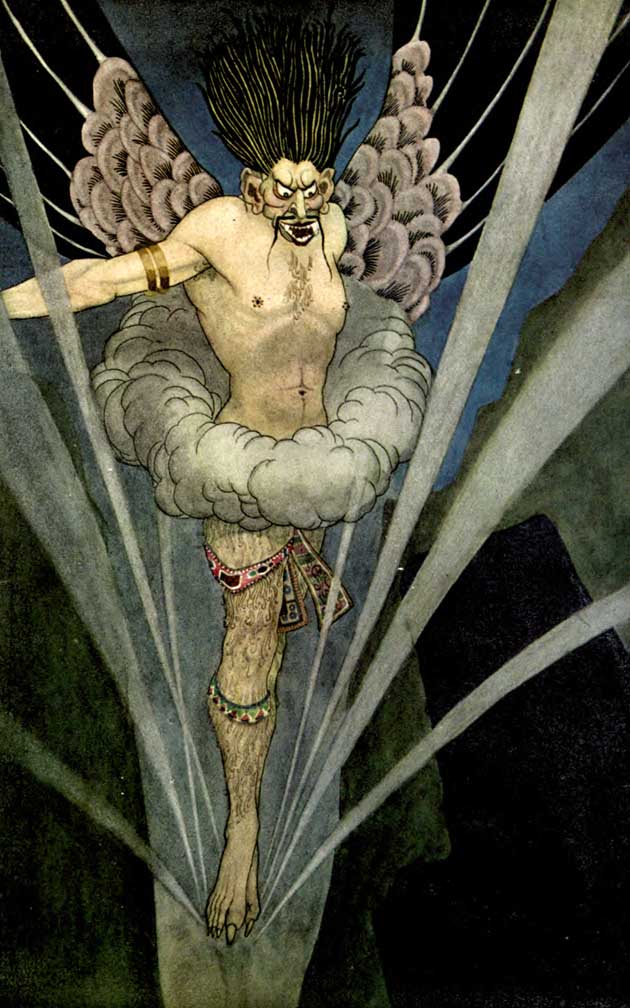 Aladdin’s mother, when she came to herself said: “Whence comes this splendid feast?” “Ask not, but eat,” replied Aladdin. So they sat at breakfast till it was dinner-time, and Aladdin told his mother about the lamp. She begged him to sell it, and have nothing to do with devils. “No,” said Aladdin, “since chance hath made us aware of its virtues, we will use it, and the ring likewise, which I shall always wear on my finger.” When they had eaten all the genie had brought Aladdin sold one of the silver plates, and so on until none were left. He then had recourse to the genie, who gave him another set of plates, and thus they lived for many years.

One day Aladdin heard an order from the Sultan proclaimed that every one was to stay at home and close his shutters while the Princess, his daughter, went to and from the bath. Aladdin was seized by a desire to see her face, which was very difficult, as she always went veiled. He hid himself behind the door of the bath, and peeped through a chink. The Princess lifted her veil as she went in, and looked so beautiful that Aladdin fell in love with her at first sight. He went home so changed that his mother was frightened. He told her he loved the Princess so deeply that he could not live without her, and meant to ask her in marriage of her father. 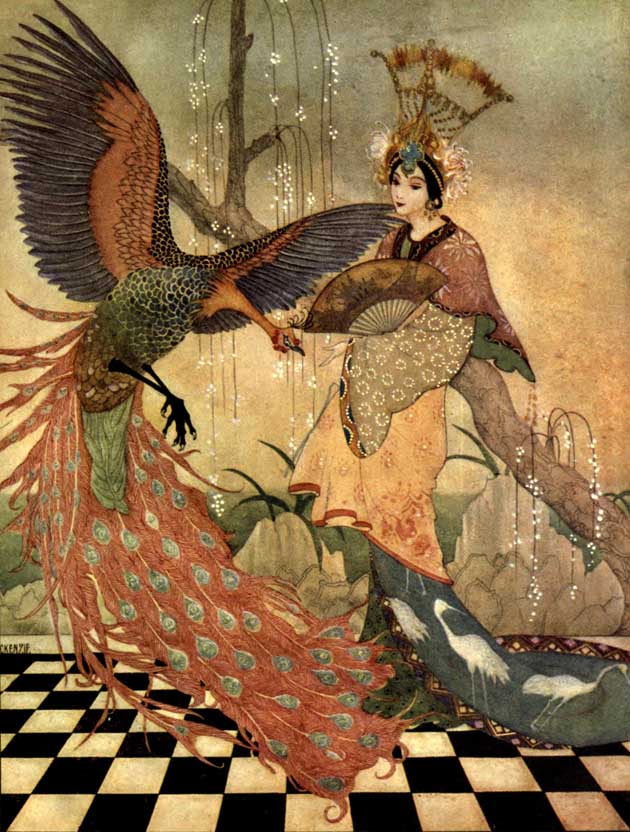 His mother, on hearing this, burst out laughing, but Aladdin at last prevailed upon her to go before the Sultan and carry his request. She fetched a napkin and laid in it the magic fruits from the enchanted garden, which sparkled and shone like the most beautiful jewels. She took these with her to please the Sultan, and set out, trusting in the lamp. The Grand Vizier and the lords of council had just gone in as she entered the hall and placed herself in front of the Sultan. He, however, took no notice of her. She went every day for a week, and stood in the same place. 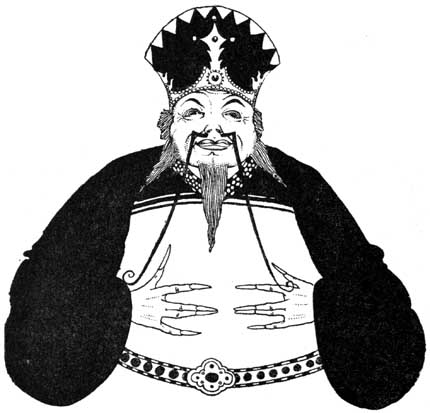 When the council broke up on the sixth day the Sultan said to his Vizier: “I see a certain woman in the audience-chamber every day carrying something in a napkin. Call her next time, that I may find out what she wants.” Next day, at a sign from the Vizier, she went up to the foot of the throne and remained kneeling till the Sultan said to her: “Rise, good woman, and tell me what you want.” She hesitated, so the Sultan sent away all but the Vizier, and bade her speak freely, promising to forgive her beforehand for anything she might say. She then told him of her son’s violent love for the Princess. “I prayed him to forget her,” she said, “but in vain; he threatened to do some desperate deed if I refused to go and ask your Majesty for the hand of the Princess. Now I pray you to forgive not me alone, but my son Aladdin.” The Sultan asked her kindly what she had in the napkin, whereupon she unfolded the jewels and presented them. He was thunderstruck, and turning to the Vizier said: “What sayest thou? Ought I not to bestow the Princess on one who values her at such a price?” The Vizier, who wanted her for his own son, begged the Sultan to withhold her for three months, in the course of which he hoped his son would contrive to make him a richer present. The Sultan granted this, and told Aladdin’s mother that, though he consented to the marriage, she must not appear before him again for three months. 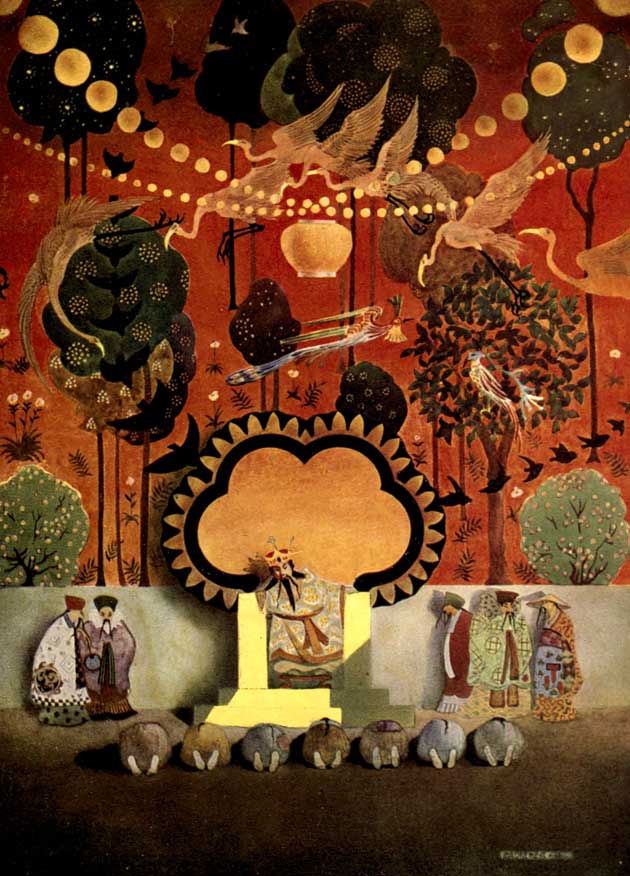 Aladdin waited patiently for nearly three months, but after two had elapsed his mother, going into the city to buy oil, found every one rejoicing, and asked what was going on. “Do you not know,” was the answer, “that the son of the Grand Vizier is to marry the Sultan’s daughter to-night?” Breathless, she ran and told Aladdin, who was overwhelmed at first, but presently bethought him of the lamp. He rubbed it, and the genie appeared, saying: “What is thy will?” Aladdin replied: “The Sultan, as thou knowest, has broken his promise to me, and the Vizier’s son is to have the Princess. My command is that to-night you bring hither the bride and bridegroom.” “Master, I obey,” said the genie. Aladdin then went to his chamber, where, sure enough, at midnight the genie transported the bed containing the Vizier’s son and the Princess. “Take this new-married man,” he said, “and put him outside in the cold, and return at daybreak.” Whereupon the genie took the Vizier’s son out of bed, leaving Aladdin with the Princess. “Fear nothing,” Aladdin said to her; “you are my wife, promised to me by your unjust father, and no harm shall come to you.” The Princess was too frightened to speak, and passed the most miserable night of her life, while Aladdin lay down beside her and slept soundly. At the appointed hour the genie fetched in the shivering bridegroom, laid him in his place, and transported the bed back to the palace.

Presently the Sultan came to wish his daughter good-morning. The unhappy Vizier’s son jumped up and hid himself, while the Princess would not say a word, and was very sorrowful. The Sultan sent her mother to her, who said: “How comes it, child, that you will not speak to your father? What has happened?” The Princess sighed deeply, and at last told her mother how, during the night, the bed had been carried into some strange house, and what had passed there. Her mother did not believe her in the least, but bade her rise and consider it an idle dream.

And a rumor went abroad in all that country of the beautiful sleeping Rosamond, for so was the Princess called; and from time to time many Kings' sons came and tried to force their way through the hedge.

‘Now I’m going on a journey!’ said the Darning Needle. ‘I do hope that I’ll not get lost!’ But she really was lost already.

There are several accounts in natural history of toads being found in the hearts of trees, and in solid rocks, wholly enclosed and shut up from the air and all appearance of food, and being taken alive out of such situations.

Why Spiders are Always Found in the Corners of Ceilings

The harvest was quite ten times greater than any they had ever had before. Egya Anansi was very well pleased when he saw his wealth of corn and beans.