The following night exactly the same thing happened, and next morning, on the Princess’s refusal to speak, the Sultan threatened to cut off her head. She then confessed all, bidding him ask the Vizier’s son if it were not so. The Sultan told the Vizier to ask his son, who owned the truth, adding that, dearly as he loved the Princess, he had rather die than go through another such fearful night, and wished to be separated from her. His wish was granted, and there was an end of feasting and rejoicing.

When the three months were over, Aladdin sent his mother to remind the Sultan of his promise. She stood in the same place as before, and the Sultan, who had forgotten Aladdin, at once remembered him, and sent for her. On seeing her poverty the Sultan felt less inclined than ever to keep his word, and asked his Vizier’s advice, who counselled him to set so high a value on the Princess that no man living could come up to it. The Sultan then turned to Aladdin’s mother, saying: “Good woman, a sultan must remember his promises, and I will remember mine, but your son must first send me forty basins of gold brimful of jewels, carried by forty black slaves, led by as many white ones, splendidly dressed. Tell him that I await his answer.”

The mother of Aladdin bowed low and went home, thinking all was lost. She gave Aladdin the message, adding: “He may wait long enough for your answer!” “Not so long, mother, as you think,” her son replied. “I would do a great deal more than that for the Princess.” He summoned the genie, and in a few moments the eighty slaves arrived, and filled up the small house and garden. Aladdin made them set out to the palace, two and two, followed by his mother. They were so richly dressed, with such splendid jewels in their girdles, that every one crowded to see them and the basins of gold they carried on their heads. 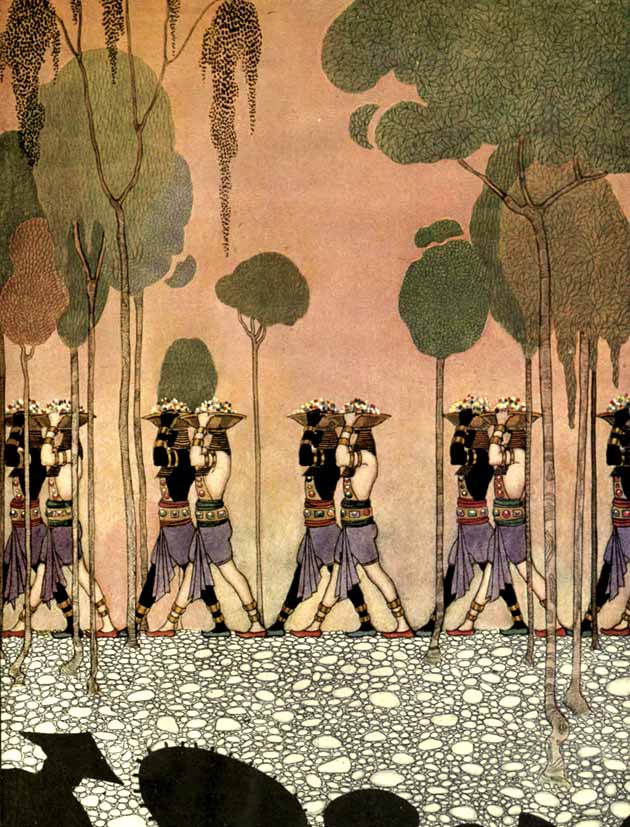 They entered the palace, and, after kneeling before the Sultan, stood in a half-circle round the throne with their arms crossed, while Aladdin’s mother presented them to the Sultan. He hesitated no longer, but said: “Good woman, return and tell your son that I wait for him with open arms.” She lost no time in telling Aladdin, bidding him make haste. But Aladdin first called the genie. “I want a scented bath,” he said, “a richly embroidered habit, a horse surpassing the Sultan’s, and twenty slaves to attend me. Besides this, six slaves, beautifully dressed, to wait on my mother; and lastly, ten thousand pieces of gold in ten purses.” No sooner said than done.

Aladdin mounted his horse and passed through the streets, the slaves strewing gold as they went. Those who had played with him in his childhood knew him not, he had grown so handsome. When the Sultan saw him he came down from his throne, embraced him, and led him into a hall where a feast was spread, intending to marry him to the Princess that very day. But Aladdin refused, saying, “I must build a palace fit for her,” and took his leave. Once home, he said to the genie: “Build me a palace of the finest marble, set with jasper, agate, and other precious stones. In the middle you shall build me a large hall with a dome, its four walls of massy gold and silver, each side having six windows, whose lattices, all except one which is to be left unfinished, must be set with diamonds and rubies. There must be stables and horses and grooms and slaves; go and see about it!” 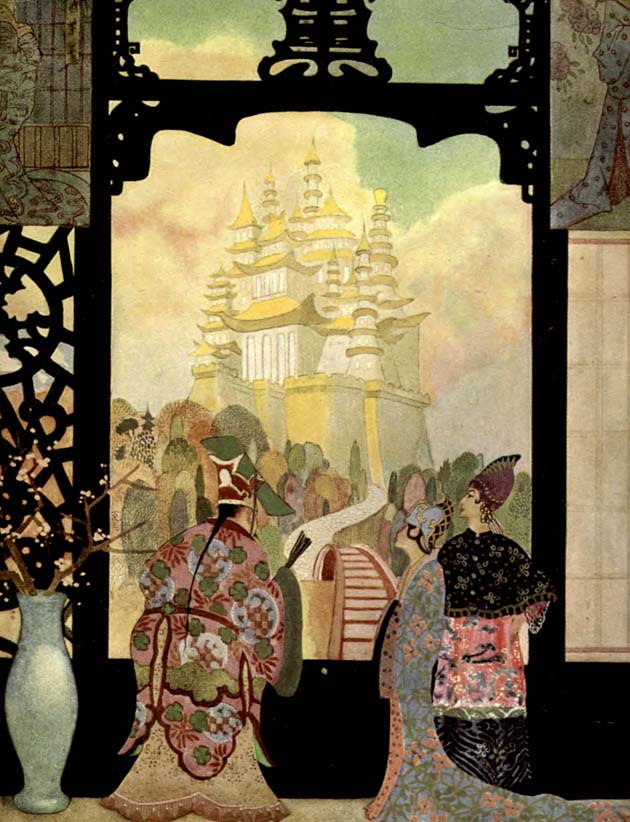 The palace was finished by next day, and the genie carried him there and showed him all his orders faithfully carried out, even to the laying of a velvet carpet from Aladdin’s palace to the Sultan’s. Aladdin’s mother then dressed herself carefully, and walked to the palace with her slaves, while he followed her on horseback. The Sultan sent musicians with trumpets and cymbals to meet them, so that the air resounded with music and cheers. She was taken to the Princess, who saluted her and treated her with great honor. At night the Princess said good-bye to her father, and set out on the carpet for Aladdin’s palace, with his mother at her side, and followed by the hundred slaves. She was charmed at the sight of Aladdin, who ran to receive her. “Princess,” he said, “blame your beauty for my boldness if I have displeased you.” She told him that, having seen him, she willingly obeyed her father in this matter. After the wedding had taken place Aladdin led her into the hall, where a feast was spread, and she supped with him, after which they danced till midnight.

Next day Aladdin invited the Sultan to see the palace. On entering the hall with the four-and-twenty windows, with their rubies, diamonds, and emeralds, he cried: “It is a world’s wonder! There is only one thing that surprises me. Was it by accident that one window was left unfinished?” “No, sir, by design,” returned Aladdin. “I wished your Majesty to have the glory of finishing this palace.” The Sultan was pleased, and sent for the best jewellers in the city. He showed them the unfinished window, and bade them fit it up like the others. “Sir,” replied their spokesman, “we cannot find jewels enough.” The Sultan had his own fetched, which they soon used, but to no purpose, for in a month’s time the work was not half done. Aladdin, knowing that their task was in vain, bade them undo their work and carry the jewels back, and the genie finished the window at his command. The Sultan was surprised to receive his jewels again, and visited Aladdin, who showed him the window finished. The Sultan embraced him, the envious Vizier meanwhile hinting that it was the work of enchantment.

Aladdin had won the hearts of the people by his gentle bearing. He was made captain of the Sultan’s armies, and won several battles for him, but remained modest and courteous as before, and lived thus in peace and content for several years.

But far away in Africa the magician remembered Aladdin, and by his magic arts discovered that Aladdin, instead of perishing miserably in the cave, had escaped, and had married a princess, with whom he was living in great honor and wealth. He knew that the poor tailor’s son could only have accomplished this by means of the lamp, and travelled night and day till he reached the capital of China, bent on Aladdin’s ruin. As he passed through the town he heard people talking everywhere about a marvellous palace. “Forgive my ignorance,” he asked, “what is this palace you speak of?” “Have you not heard of Prince Aladdin’s palace,” was the reply, “the greatest wonder of the world? I will direct you if you have a mind to see it.” The magician thanked him who spoke, and having seen the palace knew that it had been raised by the Genie of the Lamp, and became half mad with rage. He determined to get hold of the lamp, and again plunge Aladdin into the deepest poverty.

A little bird that's in the air, the hidden trespass shall declare, and openly reveal it.

The big, big Tiger came out of the jungle and said, ‘Well, little boy, shall I eat you or all of your sheep?’

My elder brother began to strike Raven with his feet and with the whip, and Raven galloped past us. After him, my second brother mounted the horse. He, too, rode for quite awhile, and he, too, urged Raven on with the whip.