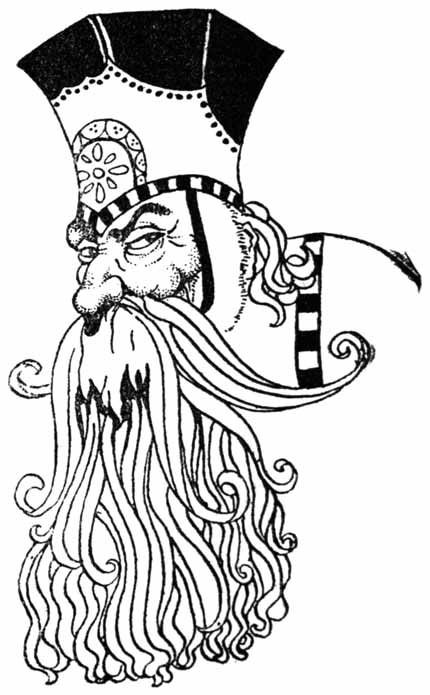 Unluckily, Aladdin had gone a-hunting for eight days, which gave the magician plenty of time. He bought a dozen copper lamps, put them into a basket, and went to the palace, crying: “New lamps for old!” followed by a jeering crowd. The Princess, sitting in the hall of four-and-twenty windows, sent a slave to find out what the noise was about, who came back laughing, so that the Princess scolded her. “Madam,” replied the slave, “who can help laughing to see an old fool offering to exchange fine new lamps for old ones?” Another slave, hearing this, said: “There is an old one on the cornice there which he can have.” Now this was the magic lamp, which Aladdin had left there, as he could not take it out hunting with him. The Princess, not knowing its value, laughingly bade the slave take it and make the exchange. She went and said to the magician: “Give me a new lamp for this.” He snatched it and bade the slave take her choice, amid the jeers of the crowd. Little he cared, but left off crying his lamps, and went out of the city gates to a lonely place, where he remained till nightfall, when he pulled out the lamp and rubbed it. The genie appeared, and at the magician’s command carried him, together with the palace and the Princess in it, to a lonely place in Africa. 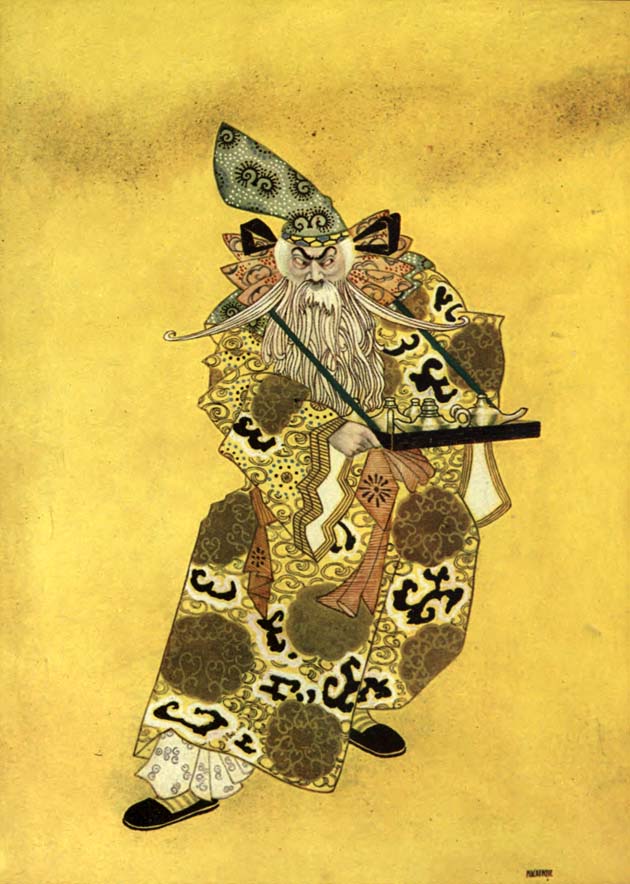 Next morning the Sultan looked out of the window towards Aladdin’s palace and rubbed his eyes, for it was gone. He sent for the Vizier and asked what had become of the palace. The Vizier looked out too, and was lost in astonishment. He again put it down to enchantment, and this time the Sultan believed him, and sent thirty men on horseback to fetch Aladdin in chains. They met him riding home, bound him and forced him to go with them on foot. The people, however, who loved him, followed, armed, to see that he came to no harm. He was carried before the Sultan, who ordered the executioner to cut off his head.

The executioner made Aladdin kneel down, bandaged his eyes, and raised his scimitar to strike. At that instant the Vizier, who saw that the crowd had forced their way into the courtyard and were scaling the walls to rescue Aladdin, called to the executioner to stay his hand. The people, indeed, looked so threatening that the Sultan gave way and ordered Aladdin to be unbound, and pardoned him in the sight of the crowd. Aladdin now begged to know what he had done. “False wretch!” said the Sultan, “come hither,” and showed him from the window the place where his palace had stood. Aladdin was so amazed that he could not say a word. “Where is my palace and my daughter?” demanded the Sultan. “For the first I am not so deeply concerned, but my daughter I must have, and you must find her or lose your head.” Aladdin begged for forty days in which to find her, promising if he failed to return and suffer death at the Sultan’s pleasure. His prayer was granted, and he went forth sadly from the Sultan’s presence. For three days he wandered about like a madman, asking every one what had become of his palace, but they only laughed and pitied him. He came to the banks of a river, and knelt down to say his prayers before throwing himself in. In so doing he rubbed the magic ring he still wore. The genie he had seen in the cave appeared, and asked his will. “Save my life, genie,” said Aladdin, “and bring my palace back.” “That is not in my power,” said the genie; “I am only the Slave of the Ring; you must ask him of the lamp.” “Even so,” said Aladdin, “but thou canst take me to the palace, and set me down under my dear wife’s window.” He at once found himself in Africa, under the window of the Princess, and fell asleep out of sheer weariness. 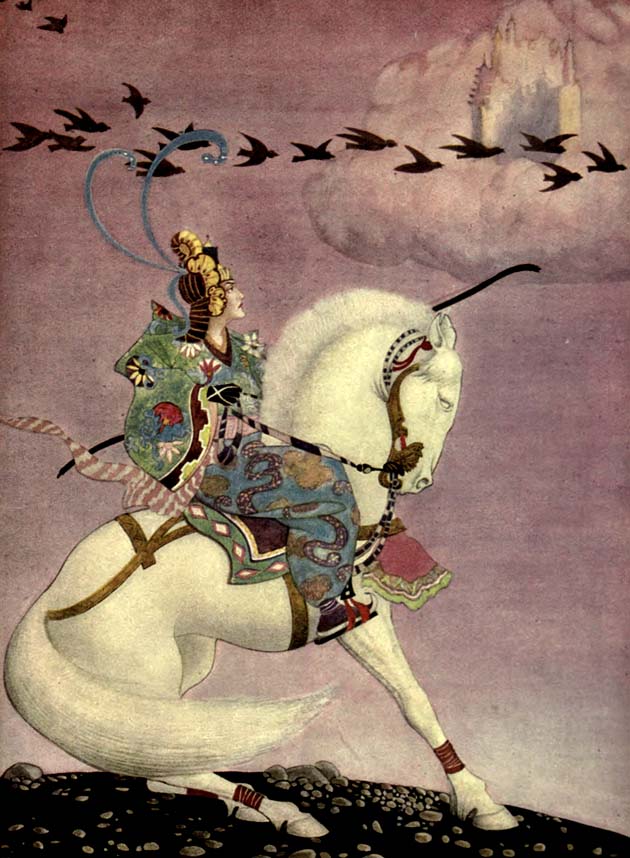 He was awakened by the singing of the birds, and his heart was lighter. He saw plainly that all his misfortunes were owing to the loss of the lamp, and vainly wondered who had robbed him of it.

That morning the Princess rose earlier than she had done since she had been carried into Africa by the magician, whose company she was forced to endure once a day. She, however, treated him so harshly that he dared not live there altogether. As she was dressing, one of her women looked out and saw Aladdin. The Princess ran and opened the window, and at the noise she made Aladdin looked up. She called to him to come to her, and great was the joy of these lovers at seeing each other again. After he had kissed her Aladdin said: “I beg of you, Princess, in God’s name, before we speak of anything else, for your own sake and mine, tell me what has become of an old lamp I left on the cornice in the hall of four-and-twenty windows, when I went a-hunting.” “Alas!” she said, “I am the innocent cause of our sorrows,” and told him of the exchange of the lamp. “Now I know,” cried Aladdin, “that we have to thank the African magician for this! Where is the lamp?” “He carries it about with him,” said the Princess. “I know, for he pulled it out of his breast to show me. He wishes me to break my faith with you and marry him, saying that you were beheaded by my father’s command. He is forever speaking ill of you, but I only reply by my tears. If I persist, I doubt not but he will use violence.” 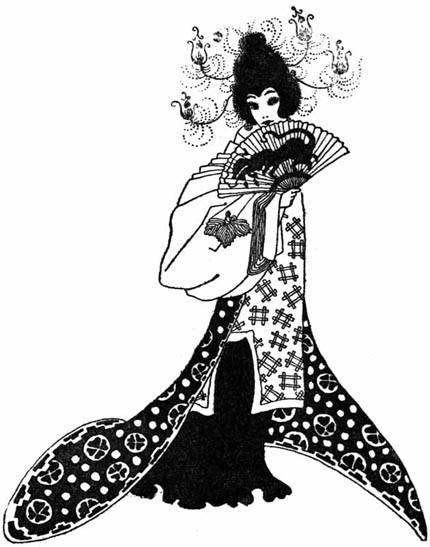 Aladdin comforted her, and left her for a while. He changed clothes with the first person he met in the town, and having bought a certain powder returned to the Princess, who let him in by a little side door. “Put on your most beautiful dress,” he said to her, “and receive the magician with smiles, leading him to believe that you have forgotten me. Invite him to sup with you, and say you wish to taste the wine of his country. He will go for some and while he is gone I will tell you what to do.” She listened carefully to Aladdin and when he left her arrayed herself gaily for the first time since she left China. She put on a girdle and head-dress of diamonds, and, seeing in a glass that she was more beautiful than ever, received the magician, saying, to his great amazement: “I have made up my mind that Aladdin is dead, and that all my tears will not bring him back to me, so I am resolved to mourn no more, and have therefore invited you to sup with me; but I am tired of the wines of China, and would fain taste those of Africa.”

The magician flew to his cellar, and the Princess put the powder Aladdin had given her in her cup. When he returned she asked him to drink her health in the wine of Africa, handing him her cup in exchange for his, as a sign she was reconciled to him. Before drinking the magician made her a speech in praise of her beauty, but the Princess cut him short, saying: “Let us drink first, and you shall say what you will afterwards.” She set her cup to her lips and kept it there, while the magician drained his to the dregs and fell back lifeless. The Princess then opened the door to Aladdin, and flung her arms round his neck; but Aladdin put her away, bidding her leave him, as he had more to do. He then went to the dead magician, took the lamp out of his vest, and bade the genie carry the palace and all in it back to China. This was done, and the Princess in her chamber only felt two little shocks, and little thought she was at home again. 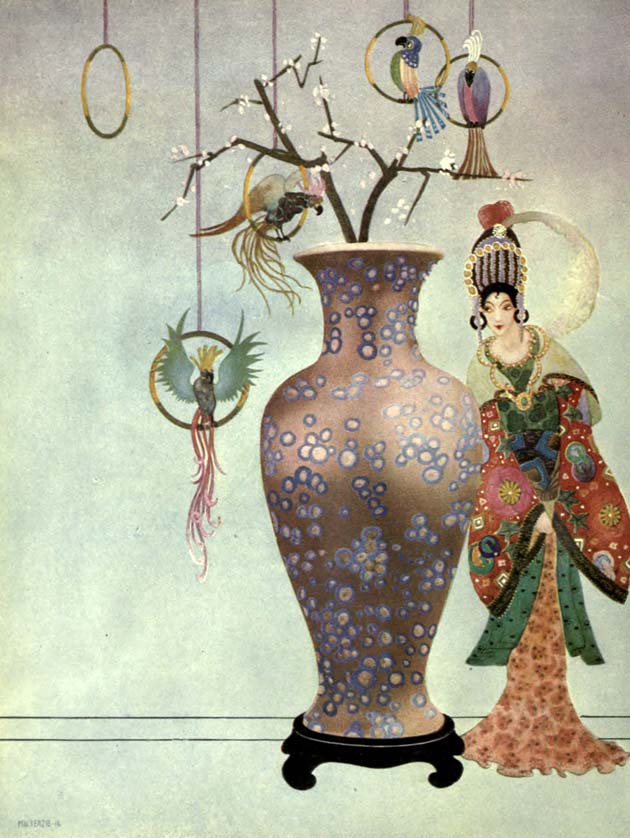