The Sultan, who was sitting in his closet, mourning for his lost daughter, happened to look up, and rubbed his eyes, for there stood the palace as before! He hastened thither, and Aladdin received him in the hall of the four-and-twenty windows, with the Princess at his side. Aladdin told him what had happened, and showed him the dead body of the magician, that he might believe. A ten days’ feast was proclaimed, and it seemed as if Aladdin might now live the rest of his life in peace; but it was not to be.

The African magician had a younger brother, who was, if possible, more wicked and more cunning than himself. He travelled to China to avenge his brother’s death, and went to visit a pious woman called Fatima, thinking she might be of use to him. He entered her cell and clapped a dagger to her breast, telling her to rise and do his bidding on pain of death. He changed clothes with her, colored his face like hers, put on her veil, and murdered her, that she might tell no tales. Then he went towards the palace of Aladdin, and all the people, thinking he was the holy woman, gathered round him, kissing his hands and begging his blessing. When he got to the palace there was such a noise going on round him that the Princess bade her slave look out of the window and ask what was the matter. The slave said it was the holy woman, curing people by her touch of their ailments, whereupon the Princess, who had long desired to see Fatima, sent for her. On coming to the Princess the magician offered up a prayer for her health and prosperity. When he had done the Princess made him sit by her, and begged him to stay with her always. The false Fatima, who wished for nothing better, consented, but kept his veil down for fear of discovery. The Princess showed him the hall, and asked him what he thought of it. “It is truly beautiful,” said the false Fatima. “In my mind it wants but one thing.” “And what is that?” said the Princess. “If only a roc’s egg,” replied he, “were hung up from the middle of this dome, it would be the wonder of the world.”

After this the Princess could think of nothing but the roc’s egg, and when Aladdin returned from hunting he found her in a very ill humor. He begged to know what was amiss, and she told him that all her pleasure in the hall was spoilt for the want of a roc’s egg hanging from the dome. “If that is all,” replied Aladdin, “you shall soon be happy.” He left her and rubbed the lamp, and when the genie appeared commanded him to bring a roc’s egg. The genie gave such a loud and terrible shriek that the hall shook. “Wretch!” he cried, “is it not enough that I have done everything for you, but you must command me to bring my master and hang him up in the midst of this dome? You and your wife and your palace deserve to be burnt to ashes, but that this request does not come from you, but from the brother of the African magician, whom you destroyed. He is now in your palace disguised as the holy woman—whom he murdered. He it was who put that wish into your wife’s head. Take care of yourself, for he means to kill you.” So saying, the genie disappeared.

Aladdin went back to the Princess, saying his head ached, and requesting that the holy Fatima should be fetched to lay her hands on it. But when the magician came near, Aladdin, seizing his dagger, pierced him to the heart. “What have you done?” cried the Princess. “You have killed the holy woman!” “Not so,” replied Aladdin, “but a wicked magician,” and told her of how she had been deceived.

After this Aladdin and his wife lived in peace. He succeeded the Sultan when he died, and reigned for many years, leaving behind him a long line of kings. 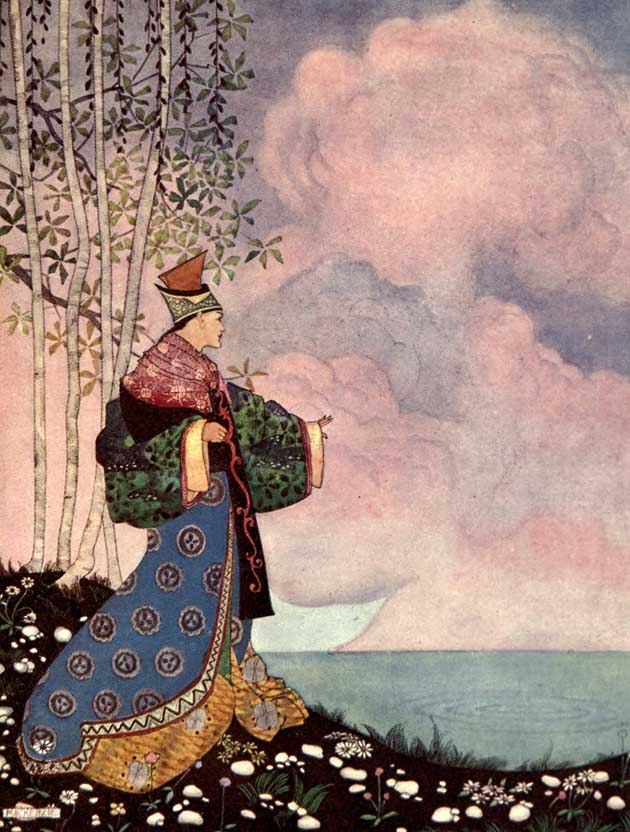 Enrique sat down on some stones to weep over his sorrow, and there prayed to heaven for his sister's life. A kid which was gracing near the spot heard the sound of his lamentations.

There lived an old woman who possessed a very pretty garden, wherein she cultivated a most beautiful bed of tulips. The pixies, so delighted in this spot, would carry their elfin babes thither, and sing them to rest.

The giant took up little Thumbling carefully with two fingers, examined him, and without saying one word went away with him.