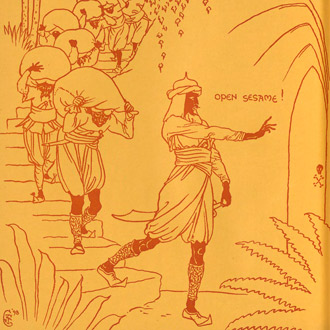 In a town in Persia lived two brothers—Cassim and Ali Baba. Cassim was rich, but Al Baba was poor, and gained his living by cutting wood, and bringing it upon three asses into the town to sell. 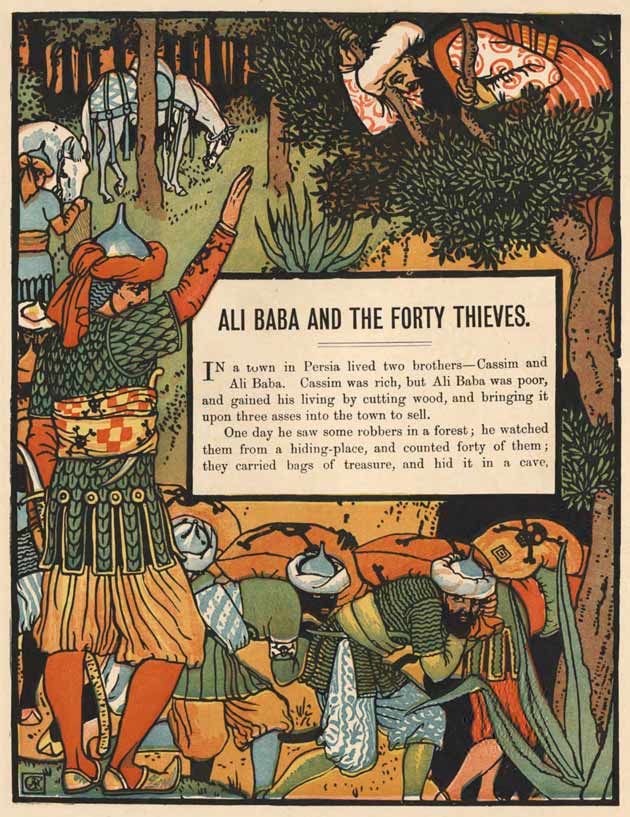 One day he saw some robbers in a forest; he watched them from a hiding-place, and counted forty of them; they carried bags of treasure, and hid it in a cave, which opened for them in the solid rock on saying the words, “Open, Sesame.” When they came out again, the captain said, “Shut, Sesame,” and the door shut behind them, and they rode off.

Then Ali Baba came down from his hiding-place, and went to the rock, and said “Open, Sesame,” and a door opened, and he entered and found all manner of treasure; he carried off a quantity of gold coin, and lading his asses with it, went home. 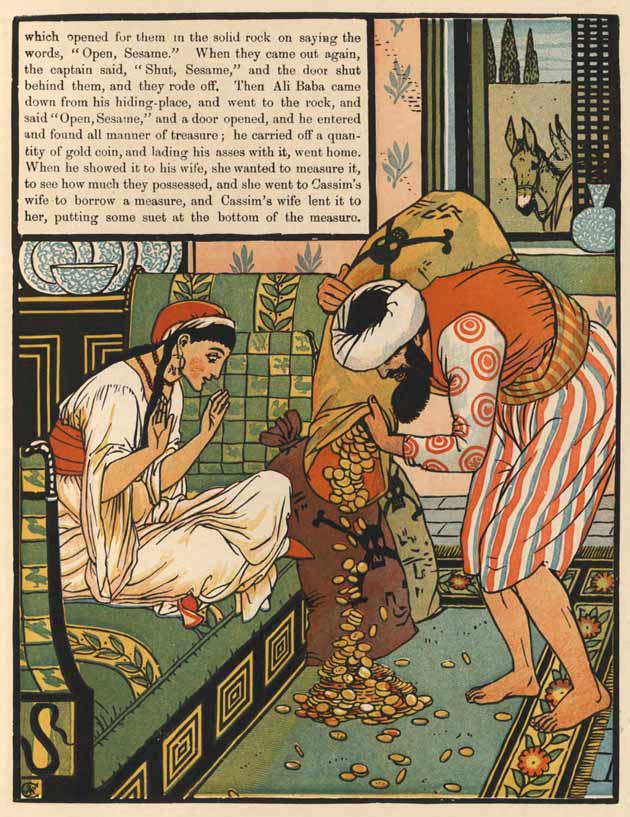 When he showed it to his wife, she wanted to measure it, to see how much they possessed, and she went to Cassim’s wife to borrow a measure, and Cassim’s wife lent it to her, putting some suet at the bottom of the measure.

Ali Baba and his wife then measured the gold, and buried it in the ground; and when Cassim’s wife received back the measure, she found a piece of gold sticking to the suet. She told Cassim, who persuaded his brother to tell him the secret of the cave, and went next day to get treasure for himself. He entered the cave by saying, “Open, Sesame;” but when he was ready to depart, having gathered many bags together, he could not think of the magic words, and so was obliged to remain in the cave till the robbers returned, who, enraged at having had their secret discovered, killed him, and cut his body into four quarters, hanging them inside the cave.

Cassim’s wife, finding that her husband did not return, went to tell Ali Baba, who at once set off to go to the cave, and on entering it discovered his brother’s remains, which he carried home on one of his asses, loading the other two with bags of gold. Ali Baba then buried the body, and contrived, with the assistance of an intelligent slave named Morgiana, to make every one believe that Cassim had died a natural death. Ali Baba then married the widow, and became very rich and prosperous. 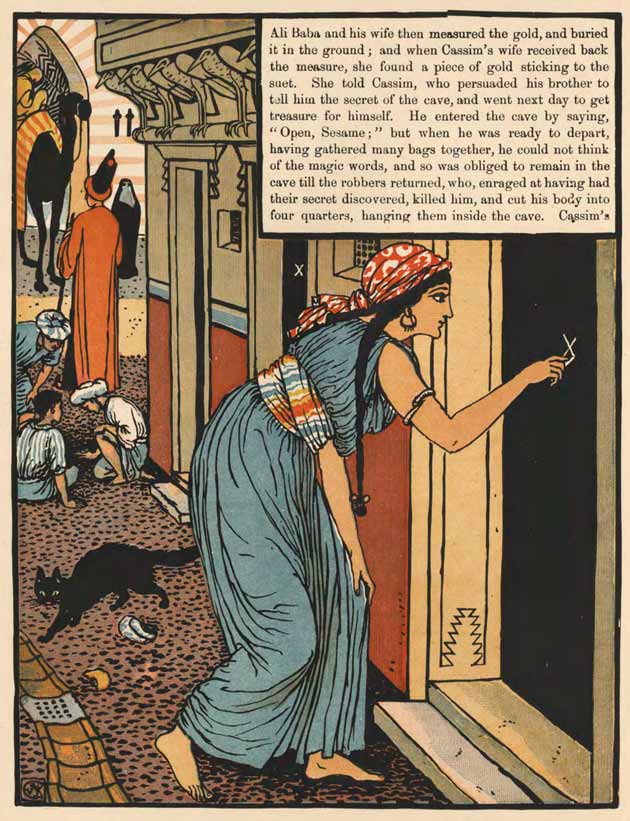 Meanwhile the forty robbers visited their cave, and finding that Cassim’s body had been removed, determined not to rest until they had discovered their enemy; and one of them undertaking the search, in which he was assisted by the Cobbler who had sewn Cassim’s body together, at last found Ali Baba’s house, which he marked with a piece of chalk, and returned to his fellows. When Morgiana saw the mark, she chalked several other doors in the same manner. The thieves then coming to attack the house, and not being able to distinguish it from the others, had to return to their cave; and the robber, who they thought had misled them, was put to death.

From Ali Baba and the Forty Thieves, by Walter Crane, 1873.

Find stories similar to Ali Baba and the Forty Thieves

My favourite green, the grass's hue, and the fine deep violet-blue, nd the pretty pale blue-bell, and the rose I love so well.

Leopard and Wolf promised the ants that on their return they would spread a feast for them. Unfortunately, Spider heard the invitation and made up his mind to benefit by it.

Blash de Manfre rendered himself famous for drinking water in large quantities and discharging it from his stomach converted into various sorts of wine, simple waters, beer, oil and milk.