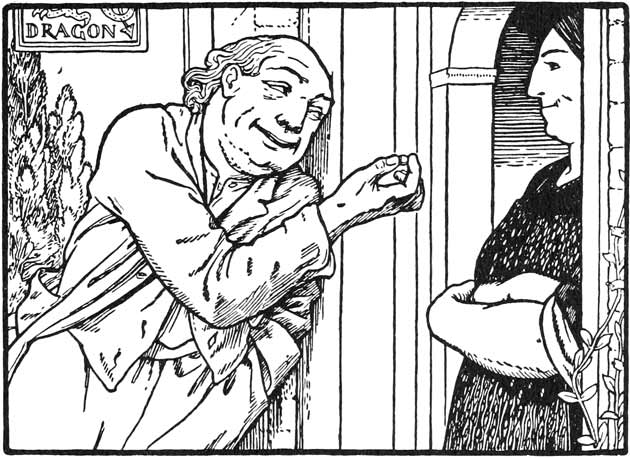 There was once a man who was the laziest man in all the world. He wouldn’t take off his clothes when he went to bed because he didn’t want to have to put them on again. He wouldn’t raise his cup to his lips but went down and sucked up his tea without carrying the cup. He wouldn’t play any sports because he said they made him sweat. And he wouldn’t work with his hands for the same reason. But at last he found that he couldn’t get anything to eat unless he did some work for it. So he hired himself out to a farmer for the season. But all through the harvest he ate as much and he worked as little as he could; and when the fall came and he went to get his wages from his master all he got was a single pea.

“What do you mean by giving me this?” he said to his master. “Why, that is all that your labor is worth” was the reply. “You have eaten as much as you have earned.” “None of your lip,” said the man; “give me my pea; at any rate I have earned that.” So when he got it he went to an inn by the roadside and said to the landlady, “Can you give me lodging for the night, me and my pea?” “Well, no,” said the landlady, “I haven’t got a bed free, but I can take care of your pea for you.” No sooner said than done. The pea was lodged with the landlady, and the laziest man went and lay in a barn near-by.

The landlady put the pea upon a dresser and left it there, and a chicken wandering by saw it and jumped up on the dresser and ate it. So when the laziest man called the next day and asked for his pea the landlady couldn’t find it. She said, “The chicken must have swallowed it.” “Well, I want my pea,” said the man. “You had better give me the chicken.” “Why, what — when — how?” stammered the landlady. “The chicken is worth thousands of your pea.” “I don’t care for that; it has got my pea inside it, and the only way I can get my pea is to have that which holds the pea.” “What, give you my chicken for a single pea, nonsense!” “Well, if you don’t I’ll summon you before the justice.” “Ah, well, take the chicken and my bad wishes with it.”

So off went the man and sauntered along all day, till that night he came to another inn, and asked the landlord if he and his chicken could stop there. He said, “No, no, we have no room for you, but we can put your chicken in the stable if you like.” So the man said, “Yes,” and went off for the night. But there was a savage sow in the stable, and during the night she ate up the poor chicken. And when the man came the next morning he said to the landlord, “Please give me my chicken.” “I am awfully sorry, sir,” said he, “but my sow has eaten it up.” The laziest man said, “Then give me your sow.” “What, a sow for your chicken, nonsense; go away, my man.” “Then if you don’t do that I’ll have you before the justice.” “Ah, well, take the sow and my curses with it,” said the landlord.

And the man took the sow and followed it along the road till he came to another inn, and said to the landlady, “Have you room for me and my sow?” “I have not,” said the landlady, “but I can put your sow up.” So the sow was put in the stable, and the man went off to lie in the barn for the night. Now the sow went roaming about the stable, and coming too near the hoofs of the mare, was hit in the forehead and killed by the mare’s hoofs. So when the man came in the morning and asked for his sow the landlady said, “I’m very sorry, sir, but an accident has occurred; my mare has hit your sow in the skull and she is dead.” “What, the mare?” “No, your sow.” “Then give me the mare.” “What, my mare for your sow, nonsense.” “Well, if you don’t I’ll take you before the justice; you’ll see if it’s nonsense.” So after some time the landlady agreed to give the man her mare in exchange for the dead sow.

Then the man followed on in the steps of the mare till he came to another inn, and asked the landlord if he could put him up for the night, him and his mare. The landlord said, “All our beds are full, but you can put the mare up in the stable if you will.” “Very well,” said the man, and tied the halter of the mare into the ring of the stable. Next morning early the landlord’s daughter said to her father, “That poor mare has had nothing to drink; I’ll go and lead it to the river.” “That is none of your business,” said the landlord; “let the man do it himself.” “Ah, but the poor thing has had nothing to drink. I’ll bring it back soon.” So the girl took the mare to the river brink and let it drink the water; but, by chance, the mare slipped into the stream, which was so strong that it carried the mare away. And the young girl ran back to her mother and said, “Oh mother, the mare fell into the stream and it was carried quite away. What shall we do? What shall we do?”

When the man came round that morning he said, “Please give me my mare.” “I’m very sorry indeed, sir, but my daughter—that one there—wanted to give the poor thing a drink and took it down to the river and it fell in and was carried away by the stream; I’m very sorry indeed.” “Your sorrow won’t pay my loss,” said the man; “the least you can do is to give me your daughter.” “What, my daughter to you because of the mare!” “Well, if you don’t I will take you before the justice.” Now the landlord didn’t like going before the justice.

So after much haggling he agreed to let his daughter go with the man. And they went along, and they went along, and they went along, till at last they came to another inn which was kept by the girl’s aunt, though the man didn’t know it. So he went in and said, “Can you give me beds for me and my girl here?” So the landlady looked at the girl who said nothing, and said, “Well, I haven’t got a bed for you but I have got a bed for her; but perhaps she’ll run away.” “Oh, I will manage that,” said the man. And he went and got a sack and put the girl in it and tied her up; and then he went off. As soon as he was gone the girl’s aunt opened the bag and said, “What has happened, my dear?” And she told the whole story. So the aunt took a big dog and put it in the sack; and when the man came the next morning he said, “Where’s my girl?” “There she is, so far as I know.” So he took the sack and put it on his shoulder and went on his way for a time.

Then as the sun grew high he sat down under the shade of a tree and thought he would speak to the girl. And when he opened the sack the big dog flew out at him, and he fell back, and that’s the last I heard of him.

The man bade ‘Morning Sunrise’ lie down on her bed as if she were dead. He then sent the report of her death to each of the three lovers, asking them to come and help him with her funeral.