Avery wealthy merchant was left, at his wife’s death, with a family of three sons and three daughters. As he was a highly intelligent man, he determined to give his children the best education that money could procure for them, and he spared no expense to engage the very best masters to teach them.

The three daughters were exceedingly handsome both in face and person, but the youngest was especially admired for the sweetness of her countenance. When she was only a very little girl everyone called her the beauty of the family, and as she grew up the name was still used, and all friends addressed her as “My Beauty,” to the disgust of her elder sisters, who were jealous of her.

Beauty was not only prettier than her sisters but she had a very much finer character, being good-tempered, gentle-mannered, obliging, and considerate. 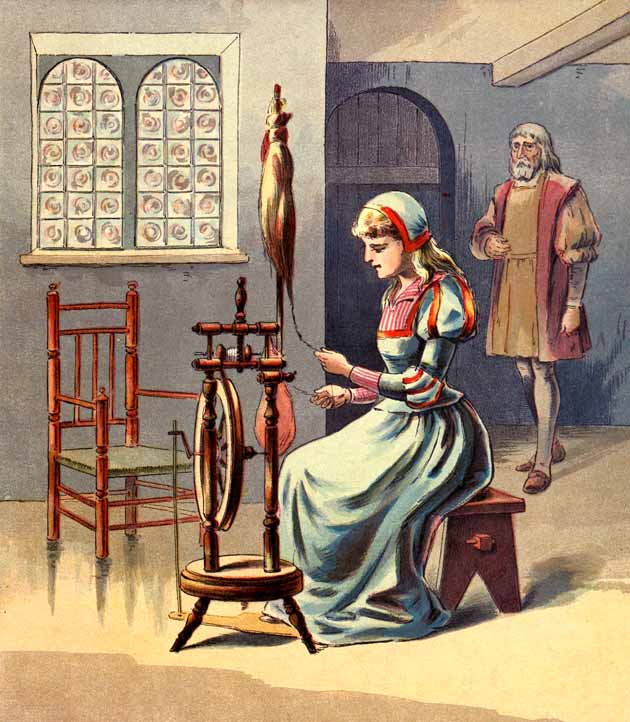 Beauty at her spinning wheel.

The sisters, on the contrary, were haughty and purse-proud. They liked to imagine themselves great ladies, and they despised the daughters of the other merchants, refusing to visit them or to receive their visits. They spent all their time driving in the park or going to balls and theatres, and they amused themselves by making game of their younger sister because she spent her leisure painting, studying her music, or reading the works of the best authors.

As everyone knew of their great wealth, these young ladies had many suitors from among the families of the other rich merchants, but when these gentlemen asked them in marriage, the two sisters replied contemptuously that no one less than a duke, or at the very least an earl, need take the trouble to propose to them. When any gentleman proposed marriage to Beauty, she thanked him politely for the honour he did her, but told him she was too young to marry, and wished to stay at home to cheer her father for some years yet.

Quite suddenly the merchant lost the whole of his great fortune, and all he had left was a few acres of land with a small cottage on it, quite far away in the country.

Almost broken-hearted, he called his children together and told them of the calamity, and that they must prepare to leave town and accompany him to the cottage, where, by industry and hard work, they would be able to live plainly, like the peasants, and pay their way honestly.

The two elder daughters laughed scornfully at the idea of living in such a place, and replied that they had lovers enough desirous of marrying them for their beauty, even if they had not a penny. They were woefully disappointed, however, for these very lovers refused to look at them now that they were poor. As they had always been so disdainful in their treatment of their neighbours, no one was sorry for them.

“They do not deserve to be pitied. It is a good thing to know their pride is humbled,” was all one heard, but with regard to the youngest sister it was quite different, and on all sides one heard:

“Oh! how sorry we are for poor Beauty—she was always so gentle and kind, and she was so polite when she spoke to us!”

There were even several gentlemen who came, now when she had not a farthing, to ask if she would marry them; but while she thanked them from her heart, she told them that she could not leave her father in his misfortune, but would go with him to the country, where she would grudge no trouble to try to make him comfortable, and to help him all she could in his work.

Poor Beauty had certainly been grieved by the loss of their wealth—it could not have been otherwise; but when she felt inclined to cry over it, she said to herself:

“Why should I cry? An ocean of tears would not mend matters. I must try and be happy without riches, like the people I see round about me.”

When they were settled in their country cottage, the merchant and his three sons set to work to dig and cultivate their land. Beauty rose at four o’clock every morning and busied herself cleaning the house and preparing and cooking food for the family.

At first she found it all very difficult, but it gradually became easier, and at the end of a few months she did not think it a trouble at all. Also, she was very much stronger—air and exercise had given her perfect health, so that she became more beautiful than ever. When she had finished her household tasks she read, played on the harpsichord, or sang to herself while spinning.