Her two sisters, on the contrary, were bored to death with their surroundings. They did not get out of bed till ten o’clock, and spent their time wandering aimlessly about, talking to each other about their former grandeur, and regretting their fine clothes and gay companions. They twitted their sister with being mean and poor-spirited because she was contented in her poverty. Their father did not think as they did. He knew that Beauty was better fitted than they were to shine in a high position. He greatly admired the character of his youngest daughter, and especially her gentle patience with her sisters, who not only left all the housework for her to do, but constantly insulted her while she was doing it.

When the family had lived about a year at the cottage, the merchant got a letter informing him that a ship in which he had valuable cargo had just arrived safely in port. The two elder girls nearly lost their heads with joy at the news, thinking that now they would be able to leave the cottage where time had hung so heavy on their hands, and when their father was ready to start upon the journey which he must make to town, they gave him a list of the dresses, mantles, and hats that he was to bring them. Beauty asked for nothing, thinking to herself that the price of the cargo would hardly pay for all the things her sisters had asked.

“Do you not want me to bring you anything?” said her father.

“Oh! thank you!” said Beauty. “I should be so glad to have a rose, if you can get one, for there are none in our little garden.” 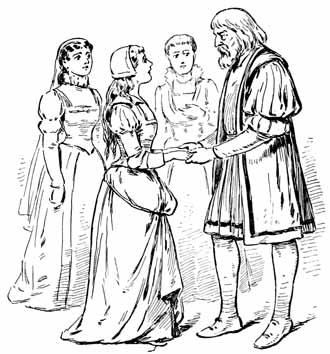 It was not really that Beauty wanted a rose so much, but she did not want to look superior to her sisters for fear of hurting their feelings and she knew a rose would not cost much.

The good father set off with hope in his heart, but when he arrived in town someone brought a lawsuit against him, and though he won his case, it took all the money he had received to pay the lawyers, so that after all his trouble he had to return home as poor as when he went away, and very much sadder. But he comforted himself with the thought that he would soon be among his own family again, and urged his horse on as quickly as it could go.

When he was only thirty miles from home it began to snow heavily, so that he could only see a few yards before him. The road lay through a large forest, with many paths branching in different directions. He took a wrong turning and soon found himself completely lost. The wind had risen to a furious gale, and he was twice blown off his horse. Then darkness came down, and the thought of spending the night in the forest, with the wolves already howling in the distance, filled him with dismay. Also he was stiff with cold and very hungry. Leading his tired horse he almost groped his way, but he felt safer on foot, as the swaying branches were too high to hurt him. All of a sudden he saw a distant light and going in its direction soon found himself in a long avenue, at the end of which were many lights. Thanking God for such a deliverance, he mounted his horse. The intelligent animal also saw the lights and needed no urging to gallop toward them. They came from the windows of a great castle, but though it was illuminated as if for a feast, there was no sign or sound of life anywhere around it. 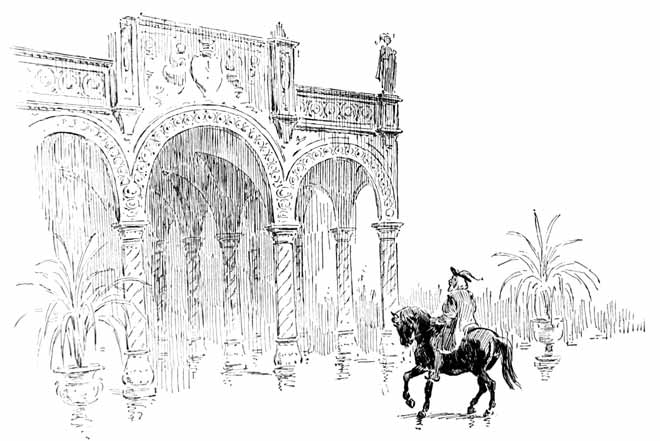 From the court they could see the open door of a great stable, toward which the horse turned of its own accord, and, finding both corn and hay there, the tired, hungry animal attacked them without hesitation and made a good meal.

The merchant tied him up for the night and turned toward the house, but no one was to be seen. He entered the open door and found himself in a great dining-hall, with a good fire blazing on the hearth, and a fine dinner already on the table, but with only one cover laid. As he was wet to the skin, he stood up before the fire, saying to himself:

“Both master and servants will pardon me, under the circumstances, and no doubt they will soon be here.”

He waited long, but no one came, and when the clock struck eleven o’clock he could resist no longer, for he was faint with hunger, so he took some chicken from a dish and ate it greedily, but trembling with fear of the consequences. As no one came, he filled a glass of wine for himself and drank it off, then another, and another. His courage returned, he went from the dining-hall, through one splendid apartment after another, all magnificently furnished, and soon found himself in a beautiful bedroom, evidently prepared for a guest, and as it was past midnight, and he was greatly fatigued, he made up his mind to lock the door of the room and go to bed.

He did not wake till ten o’clock next morning, and the first thing his eye fell on was a fine new suit of clothes laid where his wet, muddy garments had been the night before.

“Surely,” said he to himself, “this palace must belong to some good fairy, who has taken pity on me in my misery.”

He rose and looked out of the window. The snow was all gone, and under a bright sun lawns of velvety grass, avenues of shady trees, and arbours of roses, with fountains and flowers, enchanted the eye.

When the girl thought the bread should be ready she looked in the oven and was very much amazed to find a very large loaf of bread. She pretended to look about the oven as if in search of something.

The boy, forgetting himself in a moment of alarm, was heard to exclaim: ‘Run, granny, run; run for your life!’