He dressed and went down to the great hall where he had supped the previous night, and there, on a small table, was a cup of delicious chocolate and some crisp toast.

“Thank you, my lady fairy,” said he, “for having had the goodness to think of my breakfast.”

When he had taken his chocolate, the good man went out to the stable for his horse, and, as he passed under a bower of roses, Beauty’s request came to his mind, so he broke off a branch which had several roses on it. As he did so, a sudden fearful sound arose, and, looking round, he saw coming toward him a beast so horrible in appearance that he almost fainted.

“Monster of ingratitude!” said the Beast in a terrible voice. “I saved your life by receiving you into my castle, and, for my thanks, you rob me of my roses, which I love above all else in the world! Your life is the price you must pay for such a deed. I give you one quarter of an hour to prepare for your death!” 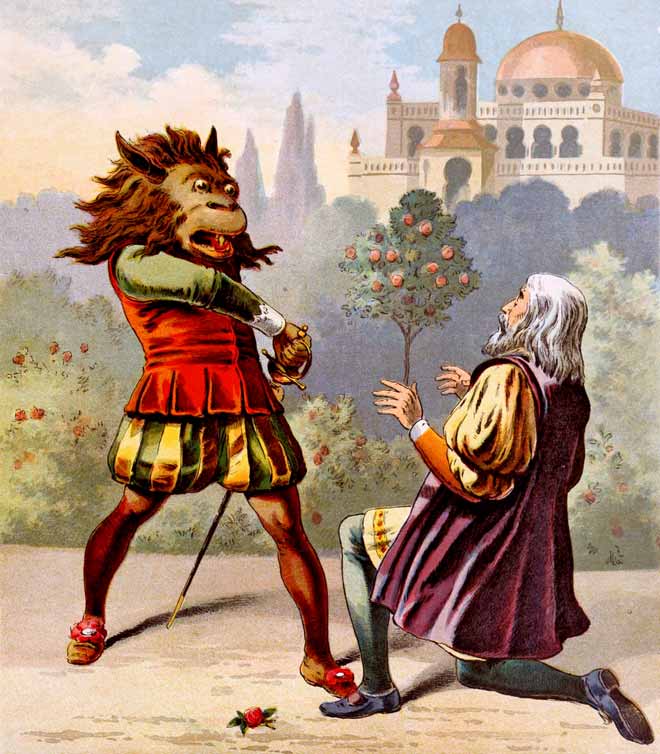 The Beast appears to the merchant.

The merchant, clasping his hands, threw himself on his knees before the monster and cried:

“Pardon me, my lord, I did not dream of offending you. I was only gathering a rose for one of my daughters who had asked me to take her one.”

“I am not called ‘my lord,’ but ‘the Beast,’” replied the odious creature. “I hate compliments, and only wish people to say what they really think, so you need not try to make me change my mind by your flatteries.

“You say, however, that you have daughters, so if one of them will come, of her own free will, to die in your stead, I am willing to pardon you—no arguing!—I have told you my will—off with you! And if none of your daughters will die for you, give me your oath that you will return yourself three months from this day.”

The good man had no intention of letting any one of his daughters sacrifice herself for him, but he saw the opportunity of seeing his family once more, and of bidding them farewell, so he promised, and the Beast told him he was free to go at any hour that suited him, adding:

“I do not wish you, however, to leave my house empty-handed. Go back to the room you slept in. There you will see a large empty chest. You may fill it with whatever you see around you, and I shall see that it is taken to your cottage.” Then the Beast disappeared.

The merchant consoled himself a little by thinking that, if he had to die, he would now be able to provide his children with something to help them to live, so he returned to the bedroom. Looking around him, he discovered quite a heap of gold coins lying on the floor. With these he quickly filled the chest and locked it; then, taking his horse from the stable, he remounted, and left the palace with a very heavy heart.

The horse, of its own accord, took the shortest way to the cottage, where they arrived in a few hours.

On his arrival the family crowded round him, kissing him and welcoming him home, but instead of returning their caresses he burst into tears. He held the rose branch in his hand, and when he could speak he turned to his daughter, and gave it to her, saying:

“My Beauty, take the roses—they are going to cost your unfortunate father very dear!”

Then he told his family the dire strait in which he found himself.

On hearing his story, the two elder daughters uttered piercing shrieks, and heaped insults and bad names on poor Beauty, who did not shed a tear.

“Only think what the pride of that small creature has brought about!” said they. “Why could she not ask for useful garments, like us? But no! the young lady wished to distinguish herself. Look, she does not even cry for causing the death of her father!”

“That would be a very useless thing to do,” said Beauty. “Why should I weep for my father’s death? He shall not die! Since the monster is willing to accept one of his daughters in his place, I shall give myself up to it, and shall be proud if by the sacrifice of my life I can save that of my dear father.”

“No! my dear sister,” cried the three brothers, with one voice. “We shall go and find this monster, and we shall kill him or perish ourselves.”

“Do not indulge in such hopes,” said the merchant. “The power of this Beast is so great that I have no hope of anyone being able to kill him. I am charmed with the kind heart of my Beauty, but I cannot let her risk her life. I am old, and, at best, could only live a few years longer. I have nothing to regret but leaving you alone, my dear children.”

“I assure you, dearest Father,” said Beauty, “that you shall not go to the Beast’s palace without me. You could not possibly hinder me from following you. Although I am young, life has no great attractions for me, and I prefer being devoured by the monster to dying of grief for the loss of my father.”

It was useless to try to dissuade her. Beauty was quite determined to go with her father when the time should come for him to return to the palace, and the jealous sisters could hardly hide their pleasure at her decision. The merchant was so grieved at the thought of perhaps losing his favourite daughter that he quite forgot to speak of the chest of gold coins which the Beast had promised to send, but on going to bed he found it there at his bedside.

The lassie set out on her way, and walked many, many days, till she came to a lofty rock. Under it sat an old hag, and played with a gold apple which she tossed about.