He made up his mind not to tell his two elder daughters about it, as he felt sure they would want to go back to their extravagant life in town, and he had determined to spend what of his life might still be before him in the country. He, however, confided the secret to Beauty, who at once remembered to tell him that during his absence two gentlemen who had made their acquaintance had fallen in love with her sisters, and, in the goodness of her heart, she advised her father to use a great part of the money in getting them married and comfortably provided for. The sweet-tempered girl cherished no resentment against them for their daily unkindness to her. She wanted to see them happy.

When the sisters saw Beauty ready to start with her father, at the date fixed, they rubbed their eyelids with an onion to make them look as if they were weeping; but the brothers, as well as their father, wept in earnest, not knowing what might happen. Beauty alone did not cry, for she did not wish to add to their grief.

They set off on horseback, Beauty riding on a pillion behind her father. The horse took the road to the palace without being guided, and they arrived in the evening, finding the whole place brilliantly lighted as before. They alighted at the entrance. The horse went to the stable, while the father and daughter entered the dining-hall, where they found a magnificently spread table, with covers for two. The merchant was too sad to care to eat, but Beauty made a great effort not to seem afraid, and sitting down, began to help him to the different dishes which he preferred. While they were eating, Beauty remarked to herself:

“The Beast must wish to fatten me before eating me, as he has provided such a feast.”

Just when they had finished their supper they heard a strange noise, and the merchant, feeling sure it was the Beast, bade his daughter adieu, weeping bitterly.

Beauty could not help shuddering when she saw the horrible face of the frightful creature, but she made a brave effort to overcome her fear, and when the monster asked her if it was really of her own free will that she had come, although she was trembling from head to foot she answered, “Yes.”

“You are a good girl, and I am much obliged to you,” said the Beast; then he turned to the father and said:

“Good man, leave this palace to-morrow morning, and do not take it into your head to return.

“Good night, Beast,” the maiden replied, and the Beast withdrew.

“Oh, my child,” said the merchant, embracing his daughter, “I am half dead already with horror. Hear me! Let me stay.”

“No, dear Father,” said she firmly; “you will go home to-morrow, and you will leave me to the care of kind Providence, who will perhaps take pity on me.”

They parted to go to their bedrooms ; neither of them expected to sleep that night, but their heads were no sooner on their pillows than they fell into a deep slumber.

During her sleep. Beauty dreamt she saw a lady, who said to her:

“Beauty, I am charmed with your tenderness of heart. Your kind action in giving your life to save your father’s will not go unrewarded.”

In the morning Beauty told the dream to her father, and it comforted him a little, but it did not keep him from crying aloud in his distress when the moment came for parting with his beloved daughter.

When he was out of sight, Beauty could not help throwing herself on a couch and sobbing as if her heart would break. This relieved her feelings, and, being of a brave nature, she sat up, commended herself to the care of God, and though she quite expected to be eaten by the Beast that evening, she resolved not to waste the few last hours of her life by meeting her trouble half-way.

She therefore took a walk through the lovely grounds, and then began to explore the interior of the castle. She could not help admiring the magnificent decorations and priceless tapestries, as well as the costly furniture.

She came to a door on which was written:

Extremely surprised, she quickly opened the door, and was dazzled by the brilliance of her surroundings—every comfort and luxury she could desire was there. 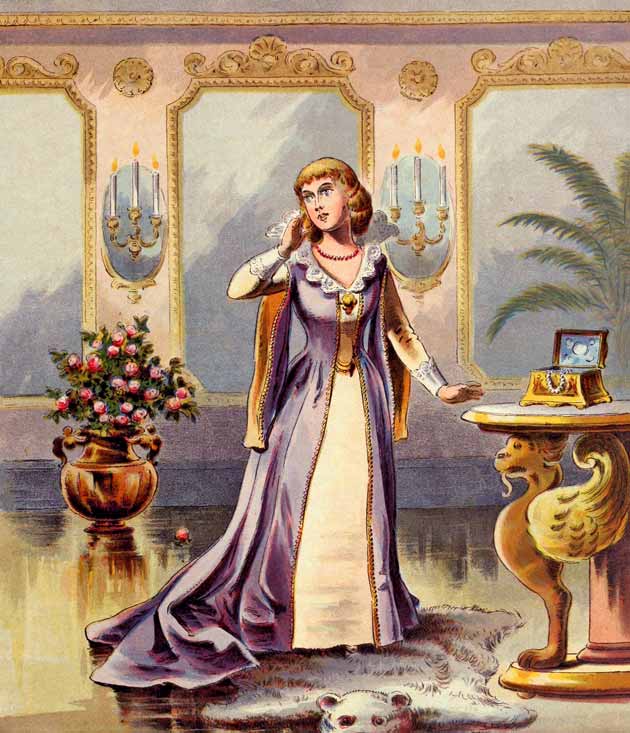 Beauty in her room in the palace.

One of the first things that caught her eye was an exquisite bookcase, filled with handsome editions of her favourite books, and near it was a harpsichord with an abundance of music.

Her godmother simply touched her with her wand, and, at the same moment, her clothes were turned into cloth of gold and silver, all decked with jewels.