“The Beast does not want me to weary,” said she in a low voice; then she thought to herself, “If I had only one day to live, he would surely not have provided so much for my entertainment.” This thought gave her courage. She opened the bookcase, and took out a volume with a very long title in gold letters; it was this:

Desire. Command.
You are Lady and Mistress here.

“Alas!” thought she, with a sigh, “I desire nothing but to see my poor father, and to know what he is doing just now.”

She laid down the book without speaking a word. Judge then of her surprise when, in a great mirror on the opposite wall, she saw the cottage where her father was just arriving, broken down with grief. Her sisters came out to meet him, pretending to be sorry, but, in spite of their false grimaces, joy was visible in their eyes to see him returning without her. Then it all disappeared, and, standing there, she could not help thinking how considerate and kind the Beast seemed to have been in trying to make her happy, and in her heart she felt she need not be so much afraid of him.

At noon an excellent dinner was on the table, and while she was eating she listened to a fine band playing lovely music, but no one was visible.

In the evening, as she sat down to supper, she heard the peculiar noise made by the Beast, and she could not help trembling violently when he appeared.

“Beauty,” said the monster, “are you willing to let me look at you while you sup?”

“You are master here,” said Beauty, in a tremulous voice.

“No!” replied the Beast, “you alone are mistress here. You have only to bid me go away if my presence annoys you and I shall go at once. Tell me frankly—do you not think me extremely ugly?”

“I do indeed,” said Beauty, “for I cannot tell an untruth, but I think you are very kind.”

“You are right,” said the monster, “but besides being ugly, I am very stupid. I know quite well that I am only a fool.”

“No one is really stupid who thinks he is not clever. No fool ever considers himself one.”

“Enjoy your supper, then. Beauty,” said the monster, “and try not to feel weary in your own house, for all you see is yours, and it would grieve me much to see you unhappy.”

“You are very kind,” said Beauty, “and your goodness of heart gives me great pleasure. Indeed, when I think how good you are, I do not seem to see you so ugly.”

“Oh! for that part,” said the Beast, “my heart is tender enough, but it does not hinder me from
being a monster.”

“There are many men far worse monsters than you are,” said Beauty, “and I prefer you with the face you have to many men I have met, who, behind a handsome face, hide a false, bad heart.”

“If I had wit enough I should pay you a great compliment to thank you for the pleasure your words give me,” said the Beast, “but, being so stupid, all I can say is that I am greatly obliged to you.”

Beauty took a hearty supper, and quite forgot her fear of the Beast, but she was again in an agony of terror when he suddenly said to her:

“Beauty, will you be my wife?” 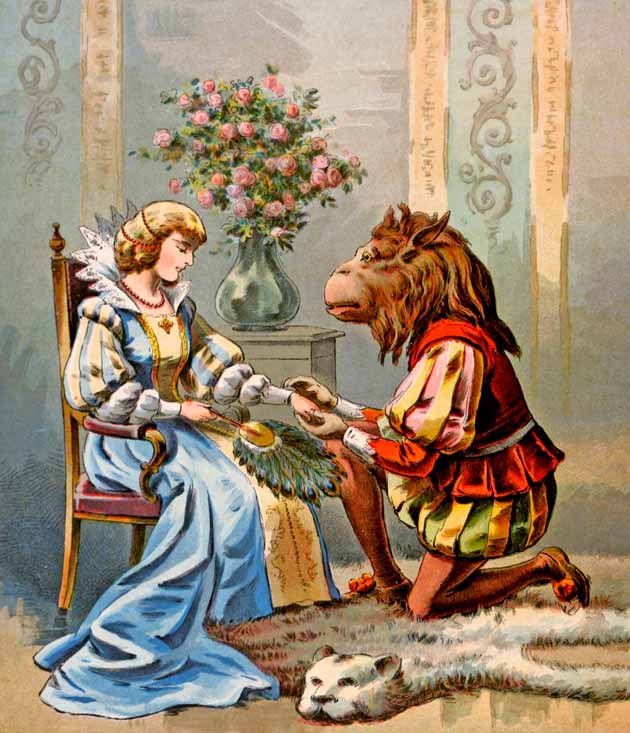 The Beast entreats Beauty to promise to marry him.

It was some time before she could find words to reply, but at last she answered simply:

At this the poor monster heaved a dreadful sigh, which seemed more like a shriek, and the whole palace shook with the sound. Beauty thought her last hour had come. The Beast, however, only said gently: “Good night, then, Beauty,” and went slowly to the door, turning his head from time to time to look wistfully at her as he went.

Left alone, Beauty felt a great wave of pity rising within her.

Three months passed thus in the palace, without any special event. Every evening Beauty received a visit from the Beast, who did his best to entertain her during supper with his simple talk, which never lacked good sense, but which was far from being what is called, in society, brilliant conversation. Every day Beauty noticed some new token of the goodness which lay below the repulsive outward appearance of the monster. She was becoming accustomed to his ugliness, and instead of dreading his visits she often found herself looking at her watch as nine o’clock drew near, for that was the hour when he made his appearance. There was only one thing which really distressed her. It was that the monster, before leaving her, never failed to ask her if she would become his wife, and never seemed less pained at her refusal.

Elves in Scotland: the Elf bull

The elf bull is small in comparison with the real one; of a mouse colour, has upright ears, short horns and legs; his hair is short, smooth, and shining like an otter.

The little men began to stitch, to pierce, and to hammer so cleverly and quickly with their little fingers that the shoemaker's eyes could scarcely follow them, so full of wonder was he.