One evening, Beauty said to him:

“Beast, you grieve me greatly. I only wish I could bring myself to marry you, but I am too sincere to pretend to you that I can ever do so. I shall always be your friend—will you not try to be contented with that?”

“I suppose I must,” said the Beast. “I can judge justly, and I know how horribly ugly I am, only I love you greatly. I ought to be very thankful that you are willing to remain here to keep me company. Promise me, I entreat you, that you will never leave me.”

Beauty blushed deeply at these words. That afternoon she had seen in her mirror that her father was very ill from his grief at losing her, and she wished greatly to visit him, and reassure him.

“I could readily promise,” said she, “never to leave you altogether, but I wish so much to see my father again that I shall die of grief if I may not do so.”

“I would rather die myself than grieve you,” said the monster. “I shall send you home to your father, you will stay there, and your poor Beast will die of grief.”

“Oh, no!” said Beauty, weeping. “I love you too much to wish to cause your death. I promise you to return in eight days. You have enabled me to see that my sisters are both married, and that my brothers have joined the army. My father is quite alone. Let me stay with him for a week, I beg of you.”

“You shall be theere to-morrow morning,” said the Beast, “but do remember your promise. When you are ready to return, you have only to lay your ring on the table when you go to bed. Good-bye, Beauty.”

The Beast sighed, in his usual fearful way, when he said these words, and Beauty went to bed, much grieved at having hurt him. She awoke next morning in her father’s house. She rang a bell which was on the table by the side of her bed, and it was answered by the servant-maid, who gave a great cry of astonishment when she saw her. The father went quickly upstairs to know what had happened, and was beside himself with joy when he saw his dear daughter. He clasped her in his arms and they embraced each other long and tenderly.

When she got up to dress. Beauty remembered that she had no clothes to put on, but the maid told her that she had just found a chest in the next room and on opening it she saw it was filled with magnificent robes of costly materials, trimmed with gold lace and embroidered with jewels, and Beauty felt most grateful to the kind Beast for his attentions. She chose the plainest of these beautiful dresses; then she asked the maid to lock the chest, as she wished to give the others to her sisters, but she had hardly said the words when the chest disappeared. Her father said it looked as if the Beast only intended the dresses for herself, and at these words the chest was again in its place.

While Beauty was dressing, word of her arrival was sent to her sisters, who appeared soon after with their husbands. Both of them were miserably unhappy. One had married a man who was exceedingly handsome, but who was so vain that he thought of nothing but his own good looks, and took no notice whatever of his wife. The other had married a man who was extraordinarily clever, but the only use he made of his brains was to utter sarcastic remarks to everyone, and particularly to his wife.

These sisters were very envious when they saw Beauty looking prettier than ever and dressed like a princess. In vain she kissed and fondled them; they could not hide their jealousy, which increased as they saw how happy she was. They both went into the garden to vent their spite, and to complain to each other.

“Why,” said they, “is that creature so much happier than we? Are we not as deserving of happiness as she is?”

“Sister,” said the eldest, “I have an idea; let us persuade her to overstay her time. Her stupid Beast will be enraged with her for not keeping her word, and probably he will devour her.”

“What a clever plan!” said the other. “We must pretend to be very fond of her and make a great fuss about her.”

With this wicked thought in their minds they went back into the cottage, and were so very loving in their speech and manner that poor Beauty almost wept for joy. At the end of the eight days, they made such a show of grief, tearing their hair and wringing their hands, that Beauty consented to stay another week, not without being very sorry for the disappointment she was causing her poor Beast, whom she had grown so fond of, and whom she was longing to see again. On the tenth night of her visit, she dreamt she was in the palace garden, where she saw the Beast lying prone upon the grass, dying, and reproaching her for her ingratitude. She awoke with a start; then she began to weep. 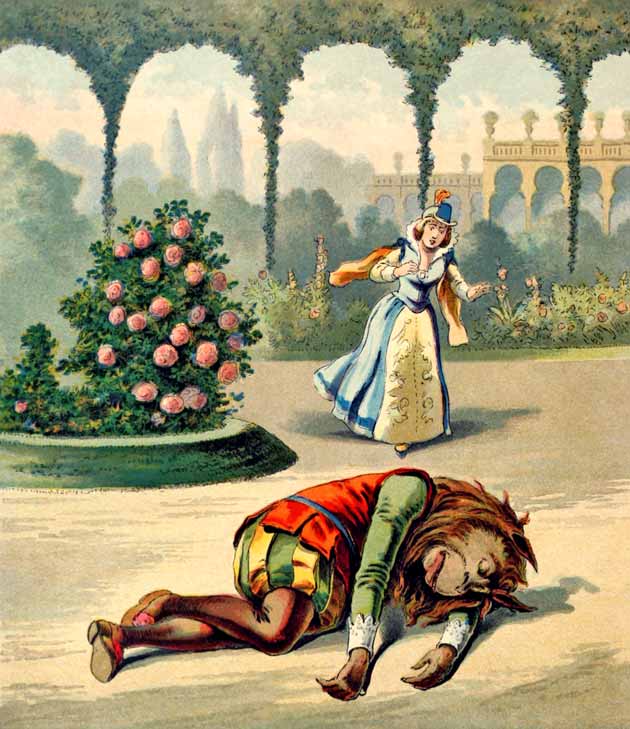 “How wicked I am!” she said to herself. “How could I grieve the poor Beast who has been so good to me? Is it his fault that he is ugly and not clever? He is good, and that is worth more than cleverness or good looks. Why could I not marry him? I should have been much happier with him than my sisters are with their husbands. It is neither the good looks nor the cleverness of her husband that can make a woman happy; it is kindness of heart, uprightness, and readiness to oblige, and my poor Beast has all these good qualities. I may not be in love with him, but my heart is full of respect, friendship, and gratitude whenever I think of him. Come! I must not make him unhappy. I should reproach myself all my life if I did.”

‘When you Flew out this morning you said you would not be Ten Minutes, and now—look at the Sun. What Time do you make it out to be, Mr. Sparrow?’

Why the Lizard Continually Moves his Head Up and Down

One day the king made a proclamation that his three daughters would be given as wives to any man who could find out their names. Anansi made up his mind to do so.

The uncle could not help thinking that he wished the little boy and girl would die, for then he should have all their money for himself.