Beauty got up, put her ring on the table, and went back to bed. She quickly fell asleep, and when she awoke next morning she was pleased to find herself back in the palace of the Beast. She dressed herself magnificently to give him pleasure, and found the day pass all too slowly, waiting for nine o’clock. At last the hour struck, but the Beast did not make his appearance.

Beauty was greatly alarmed, fearing lest she had caused his death. She ran from room to room, calling him loudly, but she got no answer. She was almost in despair when she suddenly remembered her dream. Quick as thought, she turned and ran toward the garden. There, on the very spot she had seen in her sleep, lay her poor Beast, prone on the grass near the brook, quite unconscious and apparently dead. In an agony of grief she threw herself down over his body, without any sense of horror; then, finding that his heart was still beating, she brought water from the stream and bathed his temples. This revived him a little, and at length he opened his eyes.

After a little, the Beast found strength to speak. “You forgot your promise,” said he, gazing at Beauty. “My grief at losing you was so great that I determined to starve myself to death, but I shall die happy now that I have had the great pleasure of seeing you again.”

“No, my dear Beast, you shall not die,” cried Beauty. “You must live to become my husband. From this moment I am yours. I imagined I had no stronger feeling for you than friendship, but now I know that I cannot live without you.”

Just as Beauty finished this speech, the whole palace was brilliantly illuminated, while fireworks and music showed that some great event was being celebrated. Beauty looked up for a moment, but immediately turned again toward her dear Beast, for whose life she trembled. But where was he? What did it all mean? At her feet knelt a young Prince, handsome as Adonis, who was gratefully thanking her for having broken the spell of his enchantment. Although this Prince well deserved her attention, she quickly asked him:

“Where is my Beast?”

“You see him at your feet,” was the reply. “A wicked fairy had condemned me to remain in that dreadful form till a beautiful young lady should, of her own free will, consent to marry me, and I was strictly forbidden to show my intelligence. You alone of all those I have met were touched by my kindness of disposition in spite of my forbidding appearance, and in offering you my crown and my heart I do not pretend to be able to repay all I owe to you.”

Beauty held out her hand to the Prince, in a dream of delighted surprise. He rose and clasped her hand in his, and they walked together to the palace. On entering the great hall, Beauty was overjoyed to see her dear father and all the family there. The beautiful lady whom she had seen in her dream had transported them there from the cottage.

This lady, who was a great fairy, now came forward.

“Beauty,” said she, “come and receive the reward of your wise choice. You preferred high character to mere beauty, or even cleverness; you deserve to find all these united in one person. You are going to be a great queen. I hope that the throne will not alter your character.”

“As for you, ladies,” said the fairy to the sisters, “I know the malice which fills your hearts. You shall become statues, but you shall retain your reason inside the stone which imprisons you. You shall be placed one on each side of the door of your sister’s palace, where your only punishment will be seeing your sister’s happiness. When you recognize your faults and repent of them, you will be restored to your human forms, but I fear you are likely to remain statues. One may correct oneself of pride, bad temper, greed, or sloth, but to change an evil, envious heart is little short of a miracle.” 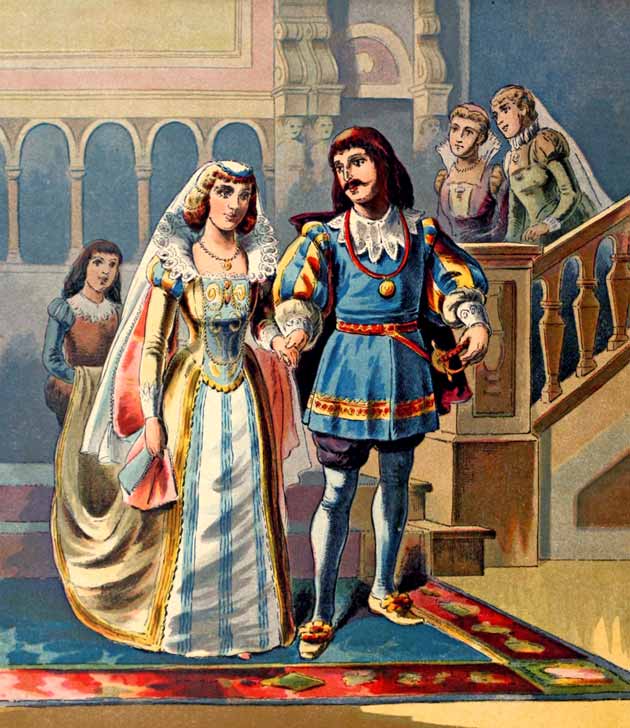 Wedding of Beauty and the Prince.

Then, with one touch of her wand, she transported the whole company to the kingdom of the Prince, whose subjects received him with joy. Beauty and he were married with great pomp, the festivities lasting many days. The union was a very happy one, and at the end of a long life their love for each other was still undiminished. 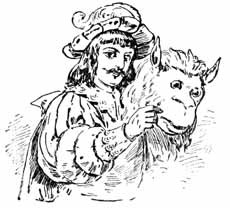 Travellers came to the City of the Emperor and admired it, and the Palace and the Garden, but when they heard the song of the Nightingale, they said: ‘That is the best of all!’

‘Now I’m going on a journey!’ said the Darning Needle. ‘I do hope that I’ll not get lost!’ But she really was lost already.