Once upon a time there was a gentleman who married, for his second wife, the proudest and most haughty woman that ever was seen. She had two daughters of her own, who were, indeed, exactly like her in all things. The gentleman had also a young daughter, of rare goodness and sweetness of temper, which she took from her mother, who was the best creature in the world.

The wedding was scarcely over, when the stepmother’s bad temper began to show itself. She could not bear the goodness of this young girl, because it made her own daughters appear the more odious. The stepmother gave her the meanest work in the house to do; she had to scour the dishes, tables, etc., and to scrub the floors and clean out the bedrooms. The poor girl had to sleep in the garret, upon a wretched straw bed, while her sisters lay in fine rooms with inlaid floors, upon beds of the very newest fashion, and where they had looking-glasses so large that they might see themselves at their full length. The poor girl bore all patiently, and dared not complain to her father, who would have scolded her if she had done so, for his wife governed him entirely.

When she had done her work, she used to go into the chimney corner, and sit down among the cinders, hence she was called Cinderwench. The younger sister of the two, who was not so rude and uncivil as the elder, called her Cinderella. However, Cinderella, in spite of her mean apparel, was a hundred times more handsome than her sisters, though they were always richly dressed.

It happened that the King’s son gave a ball, and invited to it all persons of fashion. Our young misses were also invited, for they cut a very grand figure among the people of the country-side. They were highly delighted with the invitation, and wonderfully busy in choosing the gowns, petticoats, and head-dresses which might best become them. This made Cinderella’s lot still harder, for it was she who ironed her sisters’ linen and plaited their ruffles. They talked all day long of nothing but how they should be dressed.

“For my part,” said the elder, “I will wear my red velvet suit with French trimmings.”

“And I,” said the younger, “shall wear my usual skirt; but then, to make amends for that, I will put on my gold-flowered mantle, and my diamond stomacher, which is far from being the most ordinary one in the world.” They sent for the best hairdressers they could get to make up their hair in fashionable style, and bought patches for their cheeks. Cinderella was consulted in all these matters, for she had good taste. She advised them always for the best, and even offered her services to dress their hair, which they were very willing she should do.

As she was doing this, they said to her:

“Cinderella, would you not be glad to go to the ball?”

“You are right,” they replied; “people would laugh to see a Cinderwench at a ball.”

Any one but Cinderella would have dressed their hair awry, but she was good-natured, and arranged it perfectly well. They were almost two days without eating, so much were they transported with joy. They broke above a dozen laces in trying to lace themselves tight, that they might have a fine, slender shape, and they were continually at their looking-glass.

At last the happy day came; they went to Court, and Cinderella followed them with her eyes as long as she could, and when she had lost sight of them, she fell a-crying.

Her godmother, who saw her all in tears, asked her what was the matter.

Her godmother, who was a fairy, said to her, “You wish you could go to the ball; is it not so?”

“Well,” said her godmother, “be but a good girl, and I will see that you go.” Then she took her into her chamber, and said to her, “Run into the garden, and bring me a pumpkin.”

Cinderella went at once to gather the finest she could get, and brought it to her godmother, not being able to imagine how this pumpkin could help her to go to the ball. Her godmother scooped out all the inside of it, leaving nothing but the rind. Then she struck it with her wand, and the pumpkin was instantly turned into a fine gilded coach. 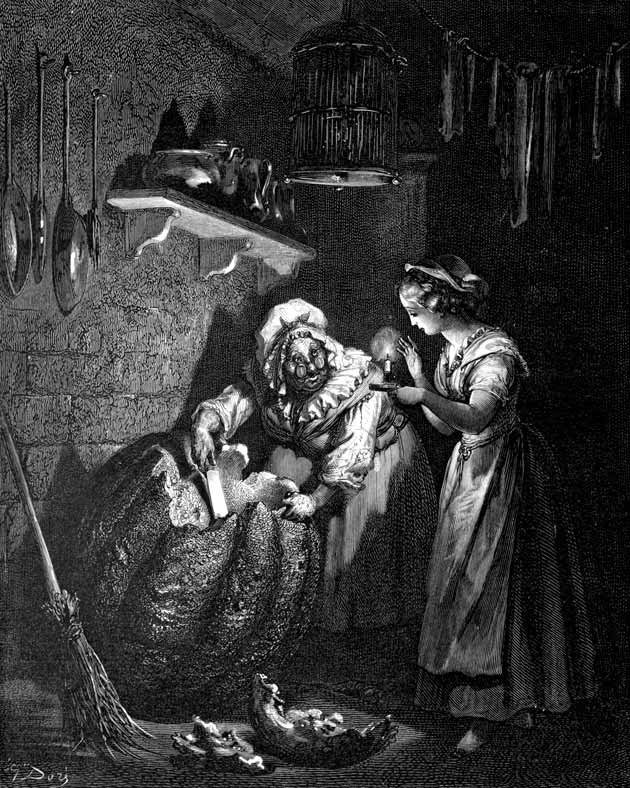 She then went to look into the mouse-trap, where she found six mice, all alive. She ordered Cinderella to lift the trap-door, when, giving each mouse, as it went out, a little tap with her wand, it was that moment turned into a fine horse, and the six mice made a fine set of six horses of a beautiful mouse-colored, dapple gray.

Being at a loss for a coachman, Cinderella said, “I will go and see if there is not a rat in the rat-trap—we may make a coachman of him.”

“You are right,” replied her godmother; “go and look.”

Cinderella brought the rat-trap to her, and in it there were three huge rats. The fairy chose the one which had the largest beard, and, having touched him with her wand, he was turned into a fat coachman with the finest moustache and whiskers ever seen.

After that, she said to her:

“Go into the garden, and you will find six lizards behind the watering-pot; bring them to me.”

She had no sooner done so than her godmother turned them into six footmen, who skipped up immediately behind the coach, with their liveries all trimmed with gold and silver, and they held on as if they had done nothing else their whole lives.

The fairy then said to Cinderella, “Well, you see here a carriage fit to go to the ball in; are you not pleased with it?”