There was once a rich man whose wife lay sick, and when she felt her end drawing near she called to her only daughter to come near her bed, and said,

“Dear child, be good and pious, and God will always take care of you, and I will look down upon you from heaven, and will be with you.”

And then she closed her eyes and died. The maiden went every day to her mother’s grave and wept, and was always pious and good. When the winter came the snow covered the grave with a white covering, and when the sun came in the early spring and melted it away, the man took to himself another wife.

The new wife brought two daughters home with her, and they were beautiful and fair in appearance, but at heart were black and ugly. And then began very evil times for the poor step-daughter.

“Is the stupid creature to sit in the same room with us?” said they; “those who eat food must earn it. She is nothing but a kitchen-maid!” 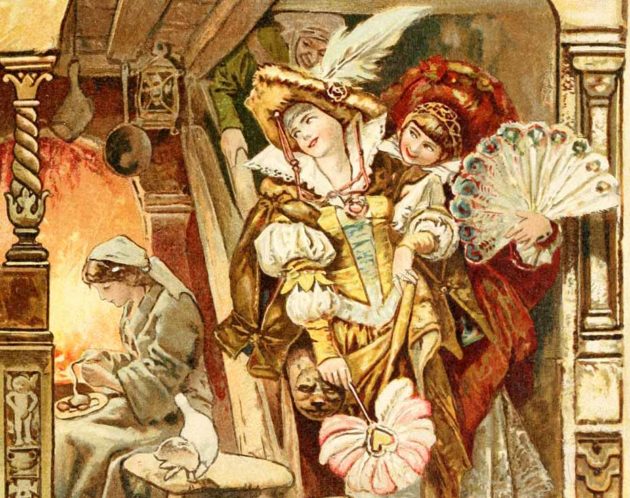 They took away her pretty dresses, and put on her an old gray kirtle, and gave her wooden shoes to wear.

“Just look now at the proud princess, how she is decked out!” cried they laughing, and then they sent her into the kitchen. There she was obliged to do heavy work from morning to night, get up early in the morning, draw water, make the fires, cook, and wash. Besides that, the sisters did their utmost to torment her—mocking her, and strewing peas and lentils among the ashes, and setting her to pick them up. In the evenings, when she was quite tired out with her hard day’s work, she had no bed to be on, but was obliged to rest on the hearth among the cinders. And because she always looked dusty and dirty, as if she had slept in the cinders, they named her Cinderella. It happened one day that the father went to the fair, and he asked his two step-daughters what he should bring back for them. “Fine clothes!” said one. “Pearls and jewels!” said the other. “But what will you have, Cinderella?” said he. “The first twig, father, that strikes against your hat on the way home; that is what I should like you to bring me.”

So he bought for the two step-daughters fine clothes, pearls, and jewels, and on his way back, as he rode through a green lane, a hazel twig struck against his hat; and he broke it off and carried it home with him. And when he reached home he gave to the step-daughters what they had wished for, and to Cinderella he gave the hazel twig. She thanked him, and went to her mother’s grave, and planted this twig there, weeping so bitterly that the tears fell upon it and watered it, and it flourished and became a fine tree. Cinderella went to see it three times a day, and wept and prayed, and each time a white bird rose up from the tree, and if she uttered any wish the bird brought her whatever she had wished for.

Now it came to pass that the King ordained a festival that should last for three days, and to which all the beautiful young women of that country were bidden, so that the King’s son might choose a bride from among them. When the two step-daughters heard that they too were bidden to appear, they felt very pleased, and they called Cinderella and said, “Comb our hair, brush our shoes, and make our buckles fast, we are going to the wedding feast at the King’s castle.”

When she heard this, Cinderella could not help crying, for she too would have liked to go to the dance, and she begged her step-mother to allow her. “What! You Cinderella!” said she, “in all your dust and dirt, you want to go to the festival! you that have no dress and no shoes! you want to dance!”

But as she persisted in asking, at last the step-mother said, “I have strewed a dishful of lentils in the ashes, and if you can pick them all up again in two hours you may go with us.”