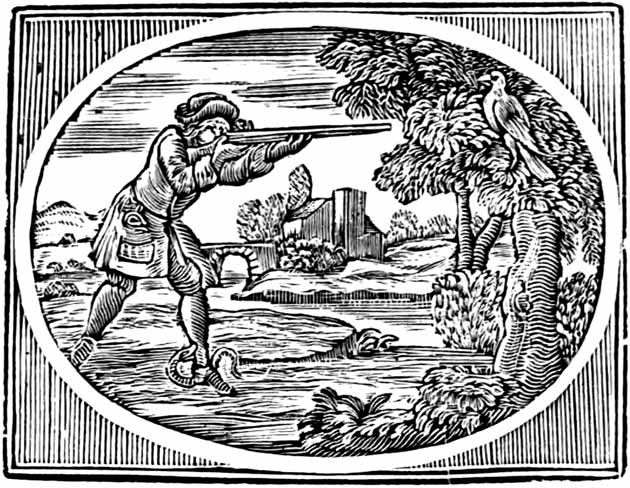 “Oh! spare me, sir,” said a Little Bird to a Hunter, who must needs shoot at All he Saw.

“Fly,” said the Marksman, “Fly! You have your Chance, and I would fain have a Moving Target.”

“Alas!” said the little Bird, “my wing is broken, I cannot soar, or even stir.”

“Spare me,” cried the Bird. “Save my life, and Of a Surety I will save yours—at this very moment you are in Danger.”

But the Hunter heeded not the Poor Bird’s warning, or perhaps he never heard it, so Eager was he to Shoot. He touched the Trigger, and the Bird tumbled over. As the shot Pierced its Side an Adder, which the man had not seen, Bit him in the Leg.

“Zounds!” he cried, “what’s that?” And turning Quickly, he saw the Snake and Killed it. But the Reptile had Already Done its work; it had stung him, and its Sting meant Death.

“Ah!” sighed the poor little Bird, when she Saw what had Happened. “Had he but Spared Me I could have Saved His life, for I saw the deadly Snake ere it Reached him. I tried to warn him, but his Heart knew no Pity Towards the Defenceless. Good bye!” she said to the Huntsman, who by this time was Writhing in Agony. “Farewell!”

“Why did you not Warn me?” cried the man.

“Alas! you gave me No Opportunity.”

“Would that I had,” sighed the Huntsman. “Could I but Efface the Past, never again would I Injure a Hapless Creature. Forgive me, poor Bird” he said, in Faltering tones.

“Forgiven,” answered the Bird, with fleeting breath, “thy Folly has Wrought its own Destruction; Surely this is Punishment Enough.”

And Together the Bird and Huntsman Died.

Don’t injure what is helpless, never seek
to take advantage of the small and weak.