Devapala was the servant of a rich merchant in India. No one ever heard of a better servant than he, so kind was Devapala, and so faithful. His work was to take his master’s cows to graze by day, and to milk, feed, and care for them evening and morning.

Most of the year this part of India was hot and dry; there were few trees to shade one from the burning sun. But when the rainy season came all this was changed. There were drops of rain in the sky, and the lightnings filled the heaven; the troops of long-tailed peacocks danced with joy; streams flowed where dust had been before, and the rumbling clouds, like great water jars, poured down the rain.

Devapala had taken his cows to graze and was returning home. On his way he came to a river swollen by the flood of rushing water and very hard to ford. On the other side of the river he saw floating an image of Jina. Now no good Hindu would let an image of Jina be tossed about in the rushing river, so Devapala waded over, pulled the image to land, and set it up under a pipal tree.

Then as he went back he made a vow that he would not eat again until after he had worshiped the image. But it went right on raining, oh, ever so hard,—so hard Devapala could not ford the river to worship the Jina. It never had rained so hard before. The great water jars in the sky were certainly turned upside down, and for seven days it did not stop. Seven days is a long time to wait for one’s breakfast, but Devapala did not forget his vow. He would not eat one crumb until he had worshiped the image of Jina.

On the seventh day the rain stopped at last. The sun shone out, and the water from the wet earth ran off down to the swollen river.

At last Devapala could ford the river and go to the pipal tree, where the image was yet standing. He worshiped the good Jina as he had promised, and to his surprise the image spoke to him. 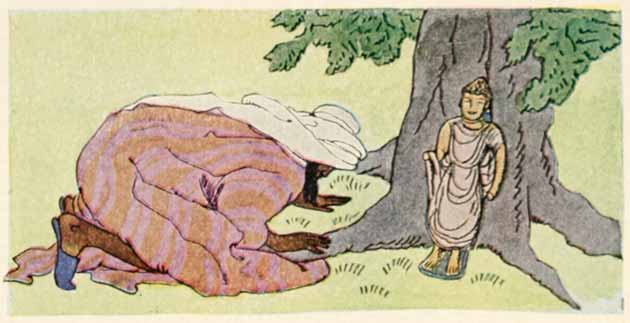 “O Devapala,” it seemed to say, “I am much pleased with such faithfulness. Go to sleep, and see what I shall do to repay you.”

So Devapala lay down and slept by the side of the image of Jina.

Now on this very day and hour the King of the city died from cholera. As he had no son to be king in his place, the ministers said, “We do not know who will be King. What can we do? Shall we let his elephant choose the next king?”

They all thought that would be the easiest way, so they brought out the King’s favorite elephant, put on his finest crimson and gold trappings, and fastened the gold and silver head-piece on his head. Then they took a pitcher filled with water, tied it to the head of the elephant, and let him go. All the ministers ran along to see where he would go, and all the people ran along, too, to see on whom the King’s elephant would spill the water. 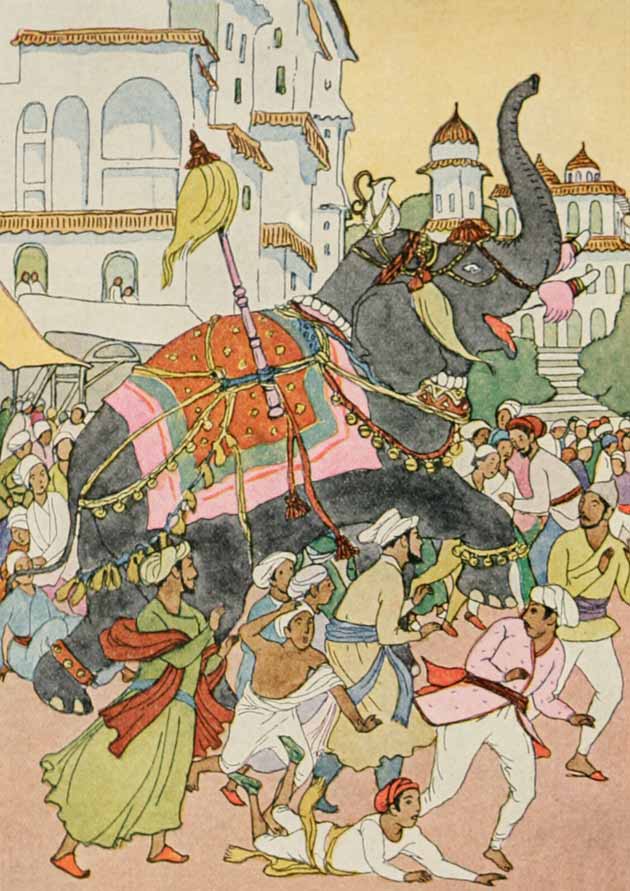 All the people ran along to see on whom the King’s elephant would spill the water.

You may be sure there were many who tried to get in his way, and all tried to be very near him so that if the water spilled it might fall on them. What a pushing and jamming there was, with people swarming before and beside! But the grand old elephant held his gold-trimmed head high, and not one drop of water did he spill.