When the pushing crowd became too thick, up went his trunk, and oh, such a trumpeting! The people scattered then, and kept out of his way, for they saw he wanted no one of them. He walked on and on until he came to the pipal tree by the river. There, by the image of the good Jina, lay Devapala, fast asleep. The elephant bent his head, and poured all the water from the pitcher over the sleeping servant.

The ministers were glad, and the people all shouted, “Hurrah! Here is our King! Hurrah!”

The ministers took the splendid garments they had brought and dressed Devapala in them, put him on the King’s own elephant, and brought him to the palace a King!

Now the merchant was very cross indeed to lose such a good servant, and as he walked by that same river he came upon the old clothes Devapala had been wearing before the elephant found him. They were very different indeed from the clothes the King was now wearing. Really, they were dreadfully dirty and worn, for the merchant had given Devapala only rags to wear.

“Why should he become King?” said the merchant. “He was a very good cowherd, and I wanted him for that. I think I’ll just show the people whom they have on their throne.”

So he took the dirty, ragged clothing and at night he nailed it up on the gate of the palace and wrote above it, in large letters,

“Here are the real clothes of your King.”

In the morning as the people came flocking past the palace gate they saw the filthy rags there and read the writing above them.

“Is it possible,” they said to one another, “that our King were such dirty things as those?” “How disgusting! I wonder if the elephant didn’t make some mistake.”

“Are elephants really so wonderful after all, do you think?”

When the King heard what the people were saying, and saw how they felt, he was very sad. But when he went to worship the Jina (as he did each morning before breakfast), it said to him, “Go home, and make an elephant of clay. Set it up before the gate of the palace where all can see it. Then mount it, just as though it were alive. Feed it whole grain as you would a real elephant. Do as I tell you, and you need not fear.”

So Devapala the King went home and did just as the Jina told him to do. He made a mighty elephant of clay, and placed it before the palace gate. Then he mounted it and fed it whole grain, as though it were alive. All the people crowded around to see what Devapala the King would do with his clay elephant.

“Oh, look,” they cried, “he is feeding his clay elephant whole grain!”

“It surely is alive!”

Then the elephant raised his trunk, and trumpeted as no elephant ever had trumpeted before.

The people all fell on their knees and cried, “He is our King, our wonderful King! We will love him and serve him always.”

Right by the pipal tree, close by the swollen river, Devapala the King built a beautiful temple, and in it set up the very image of the Jina which he had found. And every morning and every evening he went to it, bearing sweet-smelling things—camphor, sandalwood, and fragrant flowers. 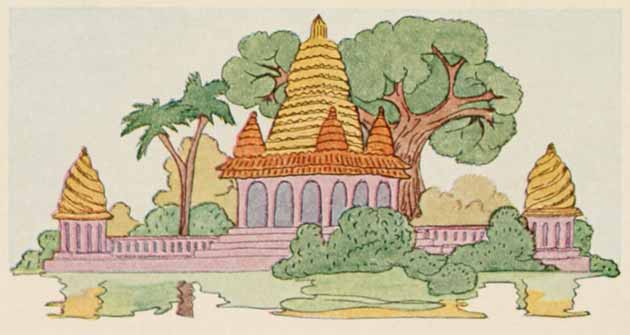 A rich, proud merchant, worth many, many thousands, came along in a gilded carriage. All the fellows at the market place, as soon as they perceived him, rushed away and hid themselves in the corners. Only one remained.

The landlady put the pea upon a dresser and left it there, and a chicken wandering by saw it and jumped up on the dresser and ate it. So when the laziest man called the next day and asked for his pea the landlady couldn't find it.

The horse gave a jump in order to rise in the air and commenced his flight, but this time he was not alone; for when waving his tail it caught up good little Arthur, winding itself round his body.