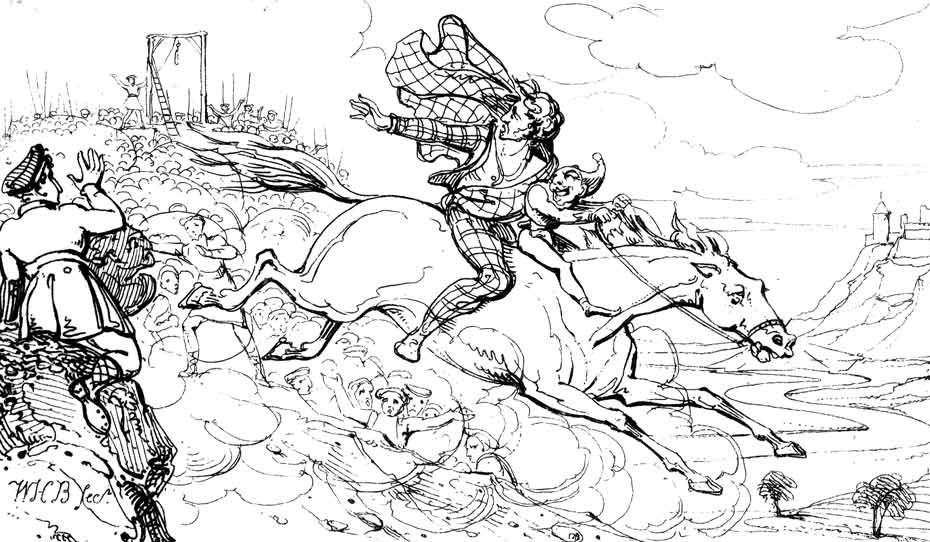 The “good neighbour” spurred his horse

People endeavour to be on good terms with the Elves, who possess so much power, and are at the same time so capricious. Though every thing fluid which is spilt on the ground is theirs by right, many persons purposely set apart for them a portion of the best things they possess.

Sometimes the subterraneous dwellings of the fairies are in the neighbourhood of men; or, as the people express it, “under the threshold;” and then an intercourse with mankind arises by borrowing and lending, and other neighbourly offices. In this quality they are called the good neighbours*: and they secretly provide for the wants of their friends, and assist them in all their undertakings so long as they do not publish their favours.

* The people pay a similar regard even to the devil, and call him the good man.

A farmer in Strathspey was one day sowing his grounds, at the same time singing a merry tune, when a very beautiful fairy made her appearance. She requested him to oblige her by singing an old Gaelic song; when he had complied, she begged him to make her a present of some corn. He asked her what she would give him for it. She replied, that if he granted her request, he should not soon be in want of seed. He gave her a considerable share out of his sack, and she withdrew. Soon after he was agreeably surprised to find that the sack out of which he had already sown a large field did not diminish, and was still the same in weight and size as when he met the fairy.

He sowed yet another field without perceiving any decrease. Quite delighted, he returned home; but his loquacious wife, who had a tongue as busy with a head as empty as the great bell of the church steeple, did not cease to proclaim her surprise at this unaccountable property of the sack out of which they had procured seed sufficient to sow the half of their lands. Now it is well known, that if you invoke a supernatural power, the charm is instantly broken. The same was the case in this instance; the sack became immediately empty. “Thou stupid woman!” exclaimed the mortified husband, “hadst thou kept thy troublesome tongue within bounds, the sack would have been worth its weight in gold.”

Godfrey Macculloch was one day riding out: he met near his own house a little old man, dressed in green, and mounted on a white horse. They saluted each other, and the little fellow gave him to understand that he lived below his house, and had to make great complaints respecting the course of a drain, which emptied itself exactly in his best apartment. Macculloch was startled at this singular speech, but guessing the nature of the being with whom he had to deal, assured the old man in the most friendly manner, that he would give another direction to the drain; and immediately commenced the necessary arrangements.

Some years after (1697) Macculloch had the misfortune to kill a neighbouring nobleman in a dispute; he was taken and condemned. The scaffold, on which he was to be beheaded, was prepared on the Castle-hill of Edinburgh, but he had scarcely reached it when the little old man on the white horse rushed through the crowd with the rapidity of lightning. Macculloch, at his bidding, jumped up behind; the “good neighbour” spurred his horse down the steep declivity, and neither he nor the animal were ever seen afterwards.