In the reign of good Queen Bess, there was an honest, industrious countryman named Meanwell, who, living under a hard landlord, was cruelly turned out of his little farm, which had enabled him to support a wife and two children, called Tommy and Margery. Care and misfortune soon shortened his days; and his wife, not long after, followed him to the grave. At her death the two poor children were left in a sad plight, and had to make all sorts of shifts to keep themselves from starving. They were also without proper clothes to keep them warm; and as for shoes, they had not even two pairs between them: Tommy, who had to go about more than his sister, had a pair to himself, but little Margery for a long time wore but one shoe.

But Heaven had heard their dying mother’s prayers, and had watched over and protected them. Relief was at hand, and better things were in store for them. It happened that Mr. Goodall, the clergyman of the parish, heard of their sad wandering sort of life, and so he sent for the two children, and kindly offered to shelter them until they could get regular work to do. Soon after this, a gentleman came from London on a visit, and no sooner did he hear the story of the orphans, than he resolved to be their friend. The very first thing he did was to order a pair of shoes to be made for Margery. And he offered to take Tommy to London, promising to put him in a way to do well by going abroad. 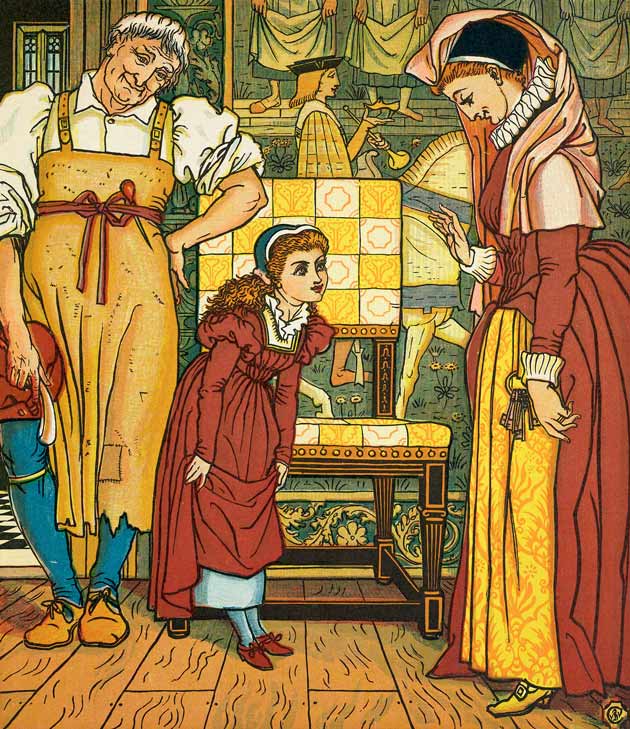 As these two children loved each other very dearly, Margery was in great trouble when the time came for her brother to start, and wept bitterly. But Tommy, in order to comfort her, promised he would not fail to come back to see her, when he should return from foreign countries.

After he was gone, Margery began to recover her usual cheerfulness: but what helped greatly to put her into good spirits, was the pleasure she took in her new shoes. As soon as the old shoemaker brought them, she put them on, and ran at once to the clergyman’s wife, crying out with glee, as she pointed to them, “Two shoes, ma’am! See, Two shoes!” These words she kept on repeating to everybody she met, and so came to be called Goody Two Shoes.

Now Margery was a thoughtful little girl, and was most anxious to learn to read and write. When Mr. Goodall saw this, he kindly taught her what she most wished to know, and in a short time she became a better scholar than any of the children who went to the village school. As soon as she found that this was the case, she thought she would try to teach such poor children as could not go to school. Now, as very few books were then printed, she thought she could get over the difficulty by cutting, out of wood, six sets of capital letters like these:—

And ten sets of these common letters:—

When, after much pains and trouble, she had finished all these wooden letters, she managed to borrow an old spelling-book, and, with the help of this, she made her playmates set up the words she wished them to spell. 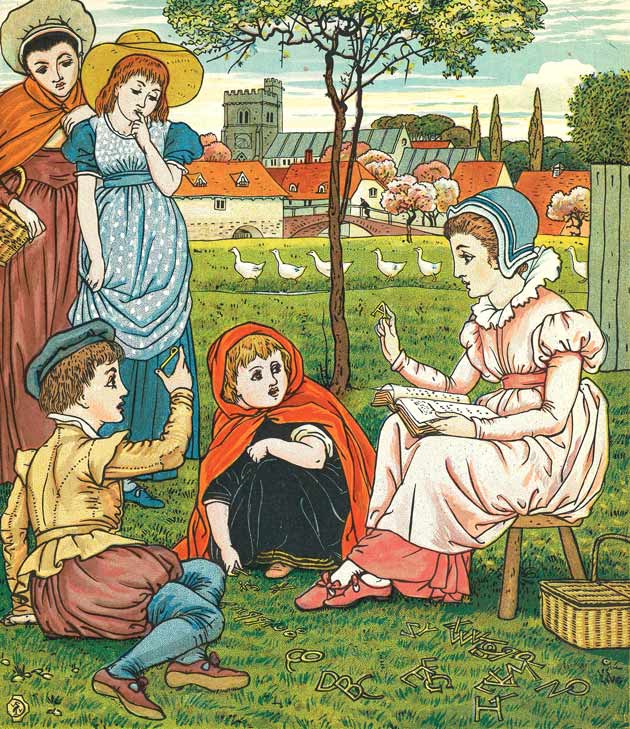 One day, as Margery was coming home from the next village, she met with some wicked, idle boys, who had tied a young raven to a staff, and were just going to throw stones at it. She offered at once to buy the raven for a penny, and this they agreed to. She then brought him home to the parsonage, and gave him the name of Ralph, and a fine bird he was. Madge soon taught him to speak several words, and also to pick up letters, and even to spell a word or two.

Some years before Margery began to teach the poor cottagers’ children, Sir Walter Welldon, a wealthy knight, had set up an elderly widow lady in a small school in the village. This gentlewoman was at length taken ill, and was no longer able to attend to her duties. When Sir Walter heard of this, he sent for Mr. Goodall, and asked him to look out for some one who would be able and willing to take Mrs. Gray’s place as mistress of the school.

The worthy clergyman could think of no one so well qualified for the task as Margery Meanwell, who, though but young, was grave beyond her years, and was growing up to be a comely maiden; and when he told his mind to the knight, Margery was at once chosen. Sir Walter built a larger school-house for Margery’s use; so that she could have all her old pupils about her that liked to come, as well as the regular scholars.

From this time, no one called her “Goody Two Shoes,” but generally Mrs. Margery, and she was more and more liked and respected by her neighbours.

Soon after Margery had become mistress of the school, she saved a dove from some cruel boys, and she called him Tom, in remembrance of her brother now far away, and from whom she had heard no tidings.

About this time a lamb had lost its dam, and its owner was about to have it killed; when Margery heard of this, she bought the lamb and brought it home. Some neighbours, finding how fond of such pets Margery was, presented her with a nice playful little dog called Jumper, and also with a skylark. Now, master Ralph was a shrewd bird, and a bit of a wag too, and when Will, the lamb, and Carol, the lark, made their appearance, the knowing fellow picked out the following verse, to the great amusement of everybody:—

“Early to bed, and early to rise,
Is the way to be healthy, wealthy, and wise.”

Mrs. Margery was ever on the look-out to be useful to her neighbours. Now a traveller from London had presented her with a new kind of instrument, a rough-looking barometer, by the help of which she could often guess correctly how the weather would be, a day or two beforehand. This caused a great talk about the country, and so provoked were the people of the distant villages at the better luck of the Mouldwell folks, that they accused Mrs. Margery of being a witch, and sent old Nicky Noodle to go and tax her with it, and to scrape together whatever evidence he could against her. When this wiseacre saw her at her school door, with her raven on one shoulder and the dove on the other, the lark on her hand, and the lamb and little dog by her side, the sight took his breath away for a time, and he scampered off, crying out, “A witch, a witch, a witch!” 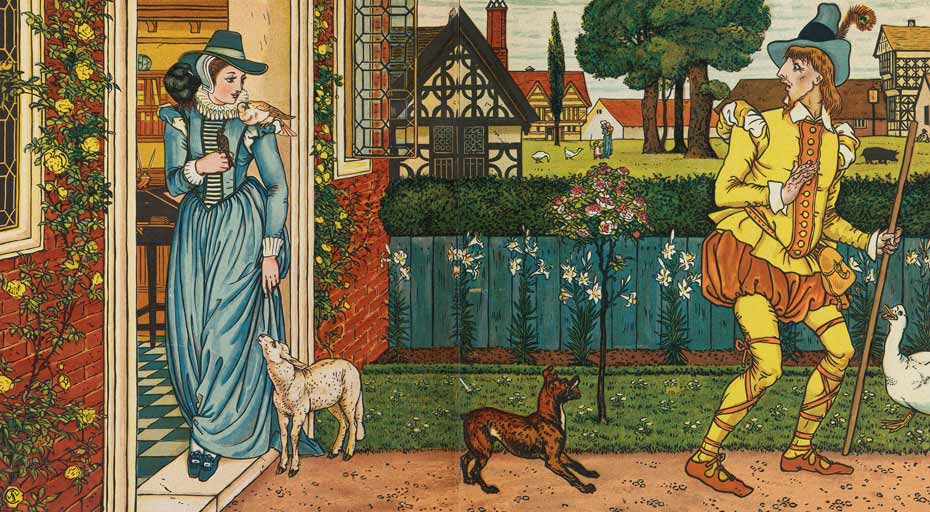 She laughed at the simpleton’s folly, and called him jocosely a “conjuror!” for his pains; but poor Mrs. Margery did not know how much folly and wickedness there was in the world, and she was greatly surprised to find that the half-witted Nicky Noodle had got a warrant against her.

At the meeting of the justices, before whom she was summoned to appear, many of her neighbours were present, ready to speak up for her character if needful. But it turned out that the charge made against her was nothing more than Nicky’s idle tale that she was a witch. Now-a-days it seems strange that such a thing could be; but in England, at that period, so fondly styled by some “the good old times,” many silly and wicked things were constantly being done, especially by the rich and powerful against the poor—such things as would not now be borne.

It happened that, among the justices who met to hear this charge against Mrs. Margery, there was but one silly enough to think there was any ground for it; his name was Shallow, and it was he who had granted the warrant. But she soon silenced him when he kept repeating that she must be a witch to foretell the weather, besides harbouring many strange creatures about her, by explaining the use of her weather-glass. 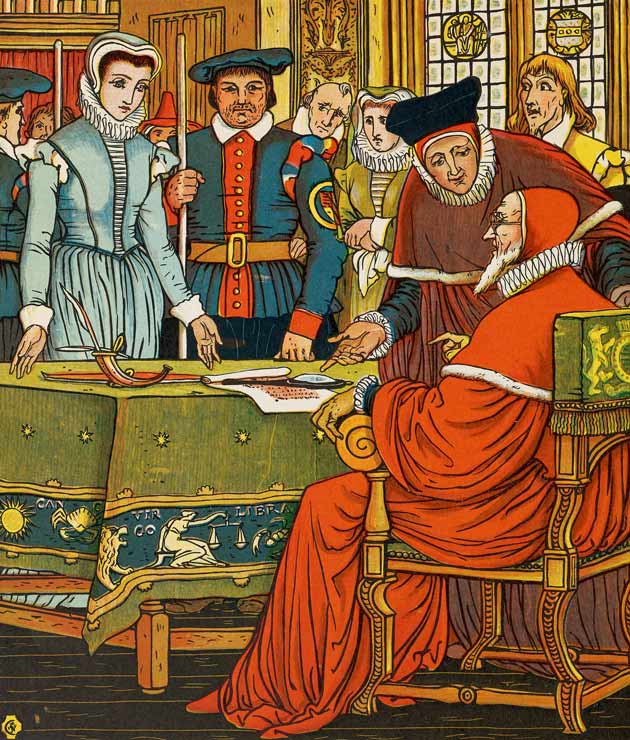 Fortunately her patron, Sir Walter Welldon, was well acquainted with the use of the new instrument. When he had explained its nature to his foolish brother-justice, he turned the whole charge into ridicule, and gave Mrs. Margery such a high character, that the justices not only released her at once, but gave her their public thanks for the good services she had done in their neighbourhood.

One of these gentlemen, Sir Edward Lovell, who was a widower, fell ill, and requested Mrs. Margery to take charge of his house, and look after his dear children. Having taken counsel with her kind old friend the clergyman, she consented to this, and quite won Sir Edward’s respect and admiration by her skill and tenderness in nursing him, and by the great care she took of his children.

By the time that Sir Edward fully regained his health, he had become more and more attached to Mrs. Margery. It was not then to be wondered at, that when she talked of going back to her school, he should offer her his hand in marriage. This proposal took her quite by surprise, but she really loved Sir Edward; and her friends, Sir Walter and Mr. Goodall, advised her to accept him, telling her she would then be able to do many more good works than she had ever done before.

All things having been settled, and the day fixed, the great folks and others in the neighbourhood came in crowds to see the wedding, for glad they were that one who had, ever since she was a child, been so deserving, was to be thus rewarded. Just as the bride and bridegroom were about to enter the church, their friends assembled outside were busily engaged in watching the progress of a horseman, handsomely dressed and mounted, who was galloping up a distant slope leading to the church, as eagerly as if he wanted to get there before the marriage. This gentleman, so elegantly dressed, proved to be no other than Margaret’s brother, our former acquaintance little Tommy, just returned with great honour and profit from a distant foreign country. When they had recovered from this pleasant surprise, the loving couple returned to the altar, and were married, to the satisfaction of all present. 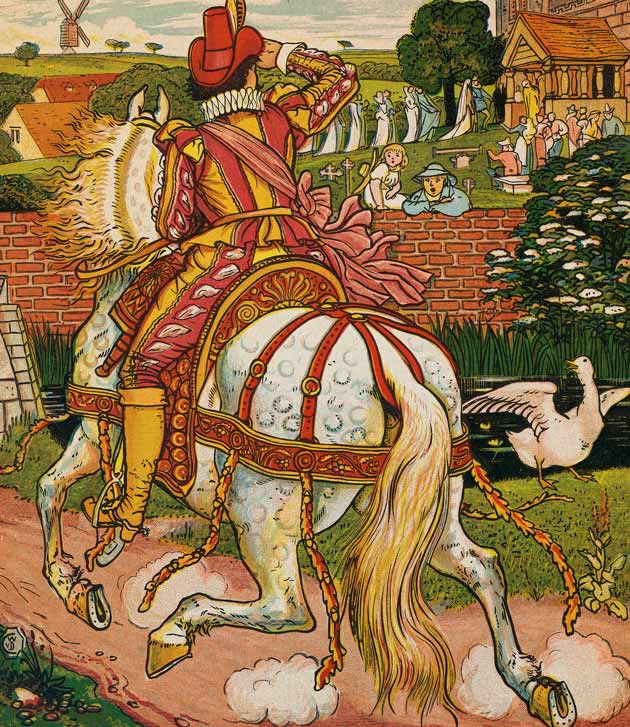 After her happy marriage, Lady Lovell continued to practise all kinds of good; and took great pains in increasing and improving the school of which she had been the mistress, and placed there a poor but worthy scholar and his wife to preside over it.

An Egg of Eggs

On opening this second egg we therein discovered a third, enveloped as the former; of a firm texture, of the natural or common shape

Mr. Fox saw a diamond ring glittering on the finger of the young lady he was dragging, and he drew his sword, raised it, and brought it down upon the hand of the poor lady.

Manabozho heard how the king of the fishes was treating the little fishes. He sent him word that he was to stop, but Me-she-nah-ma-gwai did not obey. ‘Very well,’ said Manabozho; ‘I shall punish this ruler.’