It will be readily understood by our young readers, that the real name of the little girl who is the heroine of this story was not Goody Two-Shoes, but Margery Meanwell. Her father, Mr. Meanwell, was for many years a very respectable farmer in the parish of Mouldwell, where Margery was born; but misfortunes, and the cruel persecutions of Sir Timothy Gripe, his land-lord, and the rich Farmer Graspall, ruined this worthy man, and was the source of all poor Margery’s troubles.

The estate was formerly divided into small farms; but when it came into the possession of the selfish and avaricious Sir Timothy, he accepted the offer of Farmer Graspall, to take the whole farms at an advanced rent; and they had succeeded in getting all the tenants out, except Margery’s father. The overbearing Graspall was overseer and churchwarden, and the maintenance of the poor passed through his hands; therefore, besides being anxious to get this farm, he had a great hatred to Mr. Meanwell, who always befriended the poor, when oppressed by him or Sir Timothy. At last, after various schemes of villany, with the assistance of this wicked baronet, he succeeded in driving the worthy Meanwell out of his farm, and utterly ruining him. Sir Timothy, after selling off all their goods for the rent, turned the whole family out of doors; and they left the village in a state of beggary.

Farmer Meanwell died soon after of a broken heart, and his poor wife, unable to struggle with misfortunes, only survived him a few days, leaving their unfortunate offspring, Margery and Tommy, friendless orphans in an unpitying world. 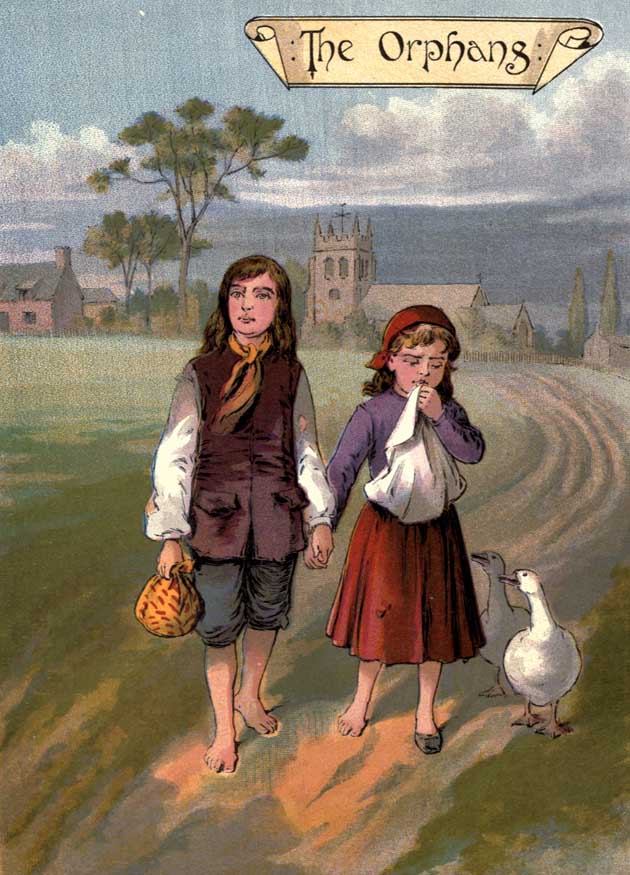 The loss of their parents seemed to endear these orphans more to each other, and they were continually seen strolling hand in hand about the village, as if they were afraid of being separated. Having no mother to take care of them, they were both in rags, and those of the meanest description. Tommy, indeed, had a pair of shoes, but poor Margery had only one. Their only sustenance was the haws which they pulled off the hedges, or a small morsel received from the poor villagers, and they slept every night in a barn. They had relations, but, as they were rich, they took no notice of these poor children; being ashamed to own such a little ragged girl as Margery, and such a dirty curly-headed boy as Tommy.

Mr. Smith, the clergyman of the parish where Margery and Tommy were born, was a very worthy man, and being at this time visited by a rich and charitable friend, he told him the story of the poor orphans. The gentleman expressed a desire to see them, and Mr. Smith sent a person to bring them to the parsonage. They soon arrived at the house, where their appearance made a favourable impression on the stranger, who gave Mr. Smith money to buy some clothes for Margery, and said that he would make Tommy a little sailor. Tommy was happy to hear this, and next day the gentleman bought him a jacket and trowsers, of which he was very proud. Margery could never give over admiring Tommy in his new dress; but her happiness met with a severe check, for the gentleman was to return to London in a few days, and to take Tommy along with him.

The parting of these children was very affecting; poor Margery’s eyes were red with crying, and her cheeks pale with grief; while little Tommy, by way of consolation, said he would never forget his dear sister, and kissed her a hundred times over. As Tommy left his sister, he wiped her eyes with the corner of his jacket, and promised to return, and bring her fine things from abroad.

When Margery found that Tommy did not come back, she cried all day until she went to bed, and next morning she went round to every one in the village, weeping and lamenting that her brother Tommy was gone. Fortunately, while she was in this distress, the shoemaker came with a pair of new shoes, which the gentleman had ordered for her, and it being so long since little Margery wore a pair of shoes, her attention was so engaged as to give a new turn to her thoughts. Nothing but the pleasure of examining her two shoes could have put a stop to the violence of her grief. She immediately put on the shoes, and then went to let Mrs. Smith see them. 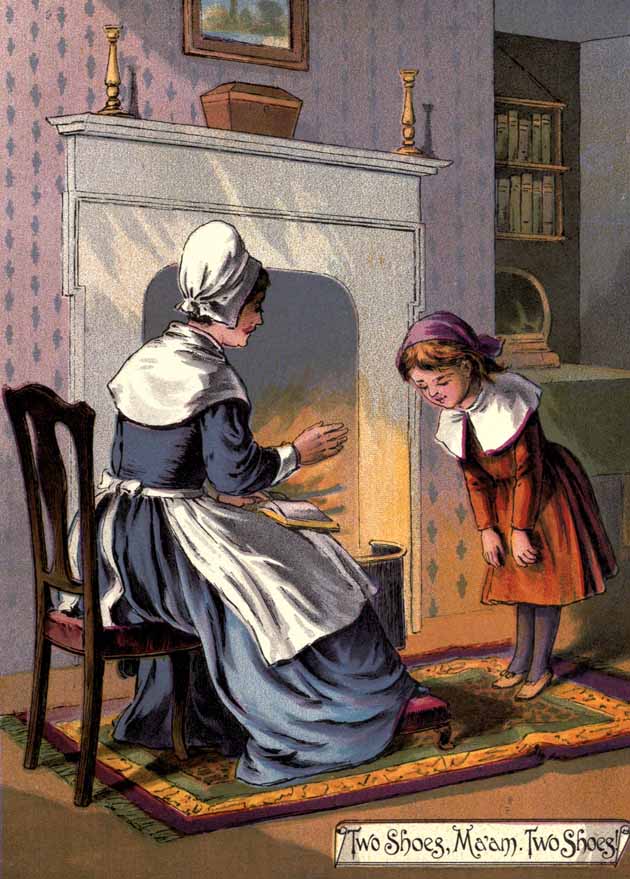 It was with delight that little Margery exhibited them to her benefactress, saying, “Two shoes, Ma’am! see, two shoes!” She then went through the whole villagers to show her new shoes, addressing them in the same way, until she got the name of “Little Two-Shoes;” but, being a very good child, they usually called her “Little Goody Two-Shoes,” and she never entirely lost that name.

From The history of Goody Two-Shoes.
Derby: Thomas Richardson, 1830.