History of Valentine and Orson

Pepin, King of France, had a sister, named Bellisant, whose hand was demanded by several kings and princes. Her choice fell on Alexander, Emperor of Constantinople, who came to the court of King Pepin to espouse her, and then escort her home in state as his bride.

Alexander’s Prime minister, and favourite, was a selfish and cruel arch-priest, who, fearing the lovely empress would soon usurp his influence over the emperor, resolved to effect her destruction.

The emperor, being of a suspicious disposition, the arch-priest worked upon it for some time, at first; and then one day, when the emperor was alone, he entered his apartments, and said; —“Mighty king, may heaven guard your majesty from the treacherous designs of your empress; who, not content with faithlessness to your sacred person, now seeks to destroy even your life.”

The emperor, implicitly believing the priest, could not restrain his fury; but rushing into his wife’s apartment, he in a savage manner, dragged her about by the hair, exclaiming, “Base wretch! I am but too well informed of your infamous proceedings!” Then dashing her on the ground, he left her, desiring her to prepare herself for death.

The empress having by the help of her attendants, somewhat recovered, sought the emperor, and falling on her knees thus addressed him, —“Oh take pity on one who has ever faithfully loved you! I shall soon become a mother; and I implore your compassion on behalf of my child! Let me be imprisoned until its birth; and then, if your anger be not appeased, do with me as you please; but, oh! save my child!” The emperor replied, “Perish, base woman, and the child of your perfidy with you!” when the courtiers, seeing any further appeal would but increase his rage, removed Bellisant from his presence.

Her faithful servant, Blandiman, now threw himself at her feet, imploring her to leave her barbarous husband, and suffer him to conduct her to her brother’s court, but she refused, as that would imply a confession of guilt.

The emperor banished his queen, instead of putting her to death, but forbade all persons, except her faithful attendant, Blandiman, to assist her, on pain of death. Thus accompanied, she soon reached the forest of Orleans, when overcome with fatigue, she sank on a couch made up of withered leaves and moss, prepared by her devoted servant, who then hastened away, to procure some assistance. During Blandiman’s absence the poor lady gave birth to two beautiful boys, when just as she was pressing them to her bosom a huge bear rushed upon her, and snatching up one of the babes in its mouth, darted off into the thickest of the forest with it. The wretched mother pursued, uttering the wildest shrieks, until exhausted by terror, she fell into a swoon, at the mouth of the monster’s cave.

It chanced that King Pepin was that day hunting in the forest, and passing near the spot where the other infant laid, was surprised to see the little beauty, who held out his tiny arms, as if to ask for protection. “See, my lords,” said King Pepin, “this lovely infant appears to solicit my favour; I will adopt it as my own.” He then delivered the babe to one of the pages, who took it to a nurse, and by the royal command, it received the name of Valentine.

Scarcely had the page galloped off when the king met Blandiman, and demanded what news from Constantinople, when hearing that the arch-priest had accused his royal sister of plotting the emperor’s death, he declared his belief in its truth, and blamed the emperor for sparing her life, adding, “Let her beware how she comes into my power.”

Blandiman now sought his mistress, whom he found half distracted with her accumulated miseries. She related to him the birth and dreadful loss of her infant, and learning her brother’s unjust wrath against her, resolved to take shelter in a monastery.

The bear that carried away the infant, took it to her cave, and laid it before her young; the cubs, however, instead of devouring it, fondled it, which the old one perceiving, gave it suck and the child grew strong and hearty. As he increased in size and strength, he ranged the forest attacking the wild beast with such fury, that they dare not approach the cave in which he continued to reside with the old bear till his eighteenth year, when his strength was so amazing, and the terror he caused in all the country round, so great, that his renown spread all over France. He was called Orson, from having been nurtured by a bear. 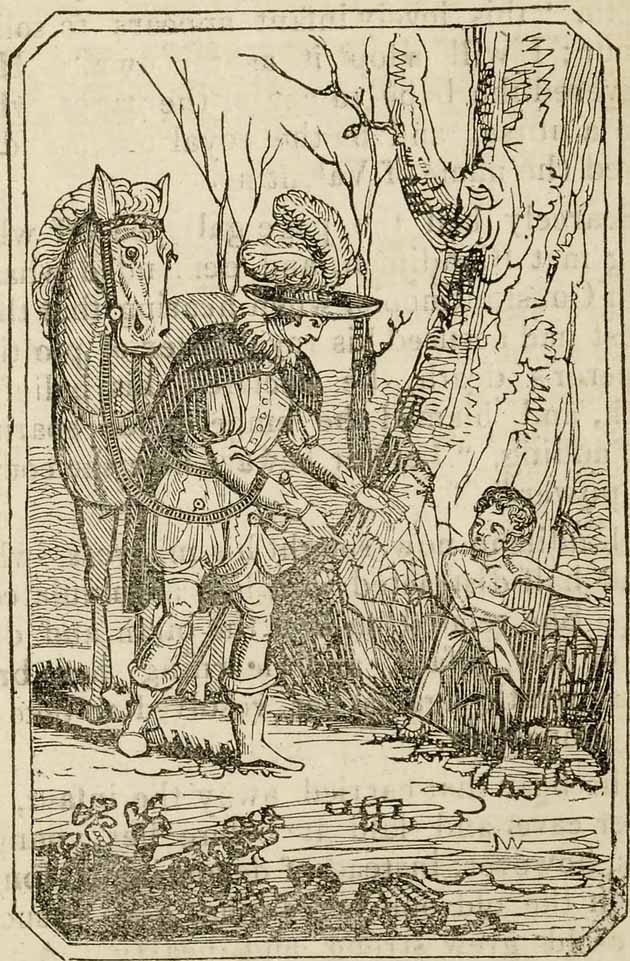 Valentine, meanwhile, had been brought up with the king’s daughter, Eglantine, to whom he was passionately attached. He was highly accomplished and brave, having greatly distinguished himself against the Saracens whom he conquered; and the favours showered on him, exciting the hatred of the king’s sons, Henry and Haufrey, they plotted to destroy him. A petition from the peasants, praying protection against Orson, being shortly after presented to the king, he issued a proclamation in which he offered a thousand marks of gold to whoever should bring Orson, dead or alive, on which Henry told his royal sire, that he thought no one so qualified to undertake this hazardous enterprise as the foundling Valentine, adding, “and perhaps, if he conquers the savage, you will reward him with the hand of our sister, Eglantine.” The king, seeing their envy, frowned displeasure; but Valentine, hinting that the advice was given in the hope of encompassing his death, declared that it concerned his honor, and he would brave the danger willingly, to preserve it unsullied.

At the first dawn of morning, Valentine arose and putting on his armour, took a shield, polished like a mirror, and having arrived at the forest, he climbed a high tree near the bear’s cave. Presently he heard Orson, who had a buck with him which he had just killed come roaring by; and he could not help admiring the beauty of his make, and his agility, wishing it were possible to tame him. He then tore off the branch of a tree, and threw it at Orson, who, looking up, uttered a furious howl and darted up the tree like lightning. Valentine descended, and Orson, seeing him on the ground, rushed down, when Valentine, holding up his shield, Orson, evidently surprised and delighted, beheld his own image. Valentine then lowered the shield, when Orson, tearing up a huge tree by the roots, attacked him, and a dreadful fight ensued, Orson receiving many wounds. The bear, hearing Orson’s cries, now rushed forth, when Valentine aimed a blow, which would have killed her, had not Orson rushed forward and throwing one arm round its neck, with supplicating gestures seemed to beg that he would not hurt her. Valentine, in token of kindness, then offered Orson some grapes, and a bottle of strong liquor, which he no sooner tasted, then he gave them to the bear, throwing his arms round her whilst she devoured them, and she uttering a gentle growl, to express her satisfaction. The strong liquor, however, soon caused her death; on which Orson stood for a few moments motionless, supposing her to be only asleep; he then endeavoured to rouse her, but finding all his efforts ineffectual, his grief was scarcely to be described, uttering the most piercing shrieks and moans. At length, approaching Valentine he made signs that he would now become his; and tears running down his cheeks meanwhile, he suffered him to bind his hands, and then followed him.

Valentine took his way towards the palace, followed by crowds, anxious to see this celebrated wonder; but when he came to the gate of the palace, the porter, affrighted, barred it and fled. Valentine made a sign to Orson, who tearing up a huge stone post, battered the gate to pieces, which so alarmed the king and the princess, that they would have fled for safety had not Valentine called to them, and assured them that Orson was no longer a savage; on which the king permitted him to be brought, and the whole court were delighted at him, especially when, on Valentine’s making signs, he kissed the hand of the fair Princess Eglantine.

Soon after, a herald from the Duke of Acquitain summoned all true knights to avenge the cause of the Lady Fezon, whom the Green Knight held in captivity, proclaiming, that whoever conquered him should receive her hand in marriage.

This knight was so famous, that all except Valentine refused to engage with him, and the princess resolved, if possible, to save him by combatting the Green Knight herself, contrived to steal his armour, whilst he slept, and galked off. Valentine hearing this when he awoke, set out, attended by Orson, and arrived just as she was almost overpowered, when he rushed with fury on the Green Knight, who, demanding a parley, said, “Brave Knight, in pity to thy youth, I tell thee, unless thou canst remove yonder shield thou ne’er canst conquer me.” Valentine flew to it, but could not stir it, when the Green Knight exclaimed, “Know that none living can subdue me, except he was suckled by a wild beast.” Valentine ran to Orson, who seizing the enchanted shield, instantly loosened it, and it fell to the ground. The Green Knight sprang upon Orson, but he dashed him to the ground, and would have destroyed him, but for Valentine. Thus subdued, he said, “This is a mystery; haste to my brother’s castle, where the Brazen Head will explain to you who my conqueror is.” They proceeded thither at once, finding the castle guarded by two lions, who, at Orson’s approach, crouched down, when a dwarf came forth and conducted them to the Brazen Head, which then spoke as follows;—

“Thou Valentine the brave, art son to the Emperor Alexander, by Bellisant, his queen, who was unjustly banished; and the wild man, Orson, is thy brother. You were both born in the forest of Orleans; you was found, and brought up by your uncle, King Pepin, but Orson was stolen, and nurtured by a bear. Proceed home, where you will find your hapless mother, and as soon as she embraces your brother, his speech will be given to him.”

The Brazen Head then fell; the castle tottered; darkness enshrouded them; and when the light was restored, no traces of the castle were to be seen. Then, having embraced each other, they proceeded to the court of France.

The wicked arch-priest, on his death bed, confessed he had basely slandered the empress, when the emperor set off for France, and releasing her from the monastery, they repaired to the place of her brother, who, together with her husband, implored her forgiveness.

The noble youths now presented themselves and no sooner had the empress thrown her arms round Orson than speech was given to him; when the Duke of Acquitain, taking his hand presented him to the Lady Fezon as her future husband, and King Pepin, at the same time, joined the hands of Valentine and the Princess Eglantine.

Splendid preparations were immediately set on foot for the celebration of their nuptials, and nothing was to be heard throughout the empire for a considerable time, but feasts and balls, fire-works and illuminations, with every other kind of gorgeous and magnificent entertainment and rejoicing.

From History of Valentine and Orson
London: T. Goode, 1846.