How Manabozho Made the Land

The rabbit is such a small animal now that no one thinks very highly of him. Yet there was once a great white rabbit, named Manabozho, who was king of all the birds and beasts and fishes. He was the largest and bravest and most powerful of all the animals. The biggest elephant in the world would have looked as small as a beetle beside huge Manabozho. 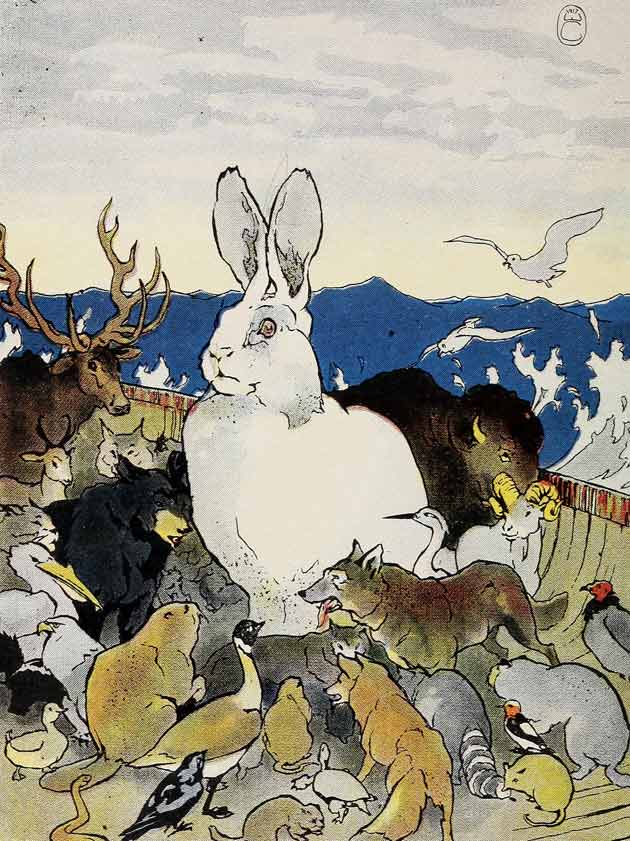 The animals were gathered about the Great White Rabbit.

Once there was a flood over all the world. A great canoe floated on the water. It was filled with animals of all sorts. They were gathered about the Great White Rabbit. Manabozho’s fur showed like snow against their brown and black and yellow fur. “Save us, Manabozho,” cried the Ox. The Beaver and the Moose and the tricky Raccoon cried for help; so did the Elk and the Wolf, the Fox and the Hopper, and all the rest.

“I want trees to build with,” said the Beaver.

“And I want them to nest in,” said the Raven.

“I will help you,” replied Manabozho. “But you must help, too. One of you must dive in the water and fetch me a little earth for a beginning.”

“That is easy,” said the Ox and the Elk.

“Then you go,” said Manabozho to the Ox.

“Then you go, Elk,” said Manabozho.

“Not I,” answered the Elk. “I have two horns, and they would hinder me.”

Then Manabozho spoke to the Raven.

“You have such sharp eyes,” he said. “Will you try? Perhaps you will come to a tree under the water’s surface on which a little grain of sand may be sticking.”

The Raven was obliging. So she took off her tail feathers, and dived. She was gone a long, long time. They were all afraid she was drowned. At last she came back, tired out.

“I could find nothing,” she said faintly.

“You did your best,” said Manabozho kindly, to her. “Beaver, you try. You are at home either on land or in water. If you succeed, you shall be the best builder of all the animals forever. You shall be king of the water.”

The Beaver agreed. He plunged in boldly. He was gone even longer than the Raven. They thought he was surely drowned. At last they saw his body floating on the waves.

They paddled the canoe up to him. The animals made a great noise as the Rabbit drew him in. But the Beaver was not dead. After a while he sighed a little, and feebly held up one paw. Sticking to it was a tiny dot of mud.

The Wolf did so, but he was so big that he nearly upset the earth.

“Run about quickly. Run round the edges,” called Manabozho.

The Wolf obeyed, and at once the land began to grow. The animals in the canoe had to paddle farther and farther away from the edges of it. At last they could hardly see the Wolf when he was on the side most distant from them.

Then Manabozho sent the Bear to help the Wolf. But the Bear made too many swamps.

“Come back,” said the Rabbit. “We want land that is dry.”

“Yes, yes,” cried all the animals. “It has been wet long enough.”

Then Manabozho sent the Deer out. He bounded and leapt so much in his joy that he made deep valleys and high mountains on the land. 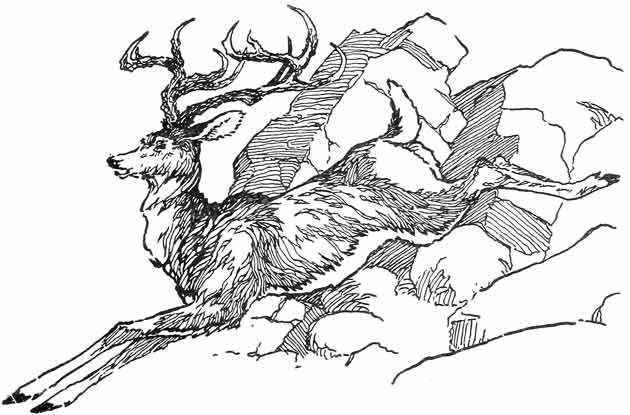 The Deer bounded
and leapt so much that he made deep valleys
and high mountains.

“Come back, come back,” called Manabozho. “We can’t be always running up and down hill.”

So the Deer came back.

Next Manabozho sent out the Butterfly. She had beautifully colored dust on her wings. As she fluttered this fell off. At once beautiful flowers and grass sprang up over the land. The animals were glad to see them.

“Now give us trees,” begged the Raven and the other birds.

Manabozho steered the canoe up to the land. He jumped upon the yellow sand that edged it. The other animals followed him.

He put sticks into the ground, and all at once trees rose up. There were willows and beeches and oaks and a great many firs and pine trees. They were wonderful trees, for they could move about. But for a while they stood still to see what else Manabozho would do.

The Deer hounded and leapt so much that he made deep valleys and high mountains.

“Is it all finished?” asked the animals and birds as they rolled about on the grass and flew about among the trees.

“No,” said Manabozho. “We have no rivers and lakes. You may think that you have had enough water, but you will need it in the future.”

Then he drew long rivers through the land with his claws. The two longest were the river St. Lawrence and the Mississippi. He then scooped out a chain of great lakes: Superior, Huron, Michigan, Erie, St. Clair, and Ontario. And he spread beautiful sand on their shores.

He sent the whales and fishes and crabs and crawfish and beavers and otters into the water. He told most of the quadrupeds to keep away from the water, and he told the birds to live in the air.

When all was done, he sent the Raven to find out how large his land was. It was days and days before she returned. She was very thin and tired.

“Why were you so long?” asked the Great White Rabbit.

Then Manabozho and all the animals were satisfied.