The trees were not the only selfish ones in Manabozho’s land. He had a great deal of trouble with Me-she-nah-ma-gwai, the king of the fishes. Manabozho had made him the king of the fishes because he promised to be a just ruler. But he was unkind to the little fishes. He ate them up whenever he wanted to, whether he was hungry or not. He chased them away from the beautiful spots in the sea where the seaweeds and colored shells were.

He was a magician, and therefore he thought he was as strong as Manabozho was. His best friend was the White Serpent, the prince of the sea serpents. He also disliked Manabozho. The two thought that they could rule as they pleased. They said that if Manabozho objected, they would kill him.

The Rabbit heard how the king of the fishes was treating the little fishes. He sent him word that he was to stop, but Me-she-nah-ma-gwai did not obey.

“Very well,” said Manabozho; “I shall punish this ruler.”

Manabozho lived with his old grandmother who was called Maja. He was very kind to her, and kept her well supplied with food. One day she said to him, “Manabozho, I want some oil. Can you get me some? I have not had any for a long time.”

“Certainly, Maja,” he said. “Make me a fishing line of cedar bark while I build a canoe.”

Manabozho was so skillful that he soon had his canoe ready. His grandmother handed him the line of cedar bark. Then he went to Lake Superior to fish. 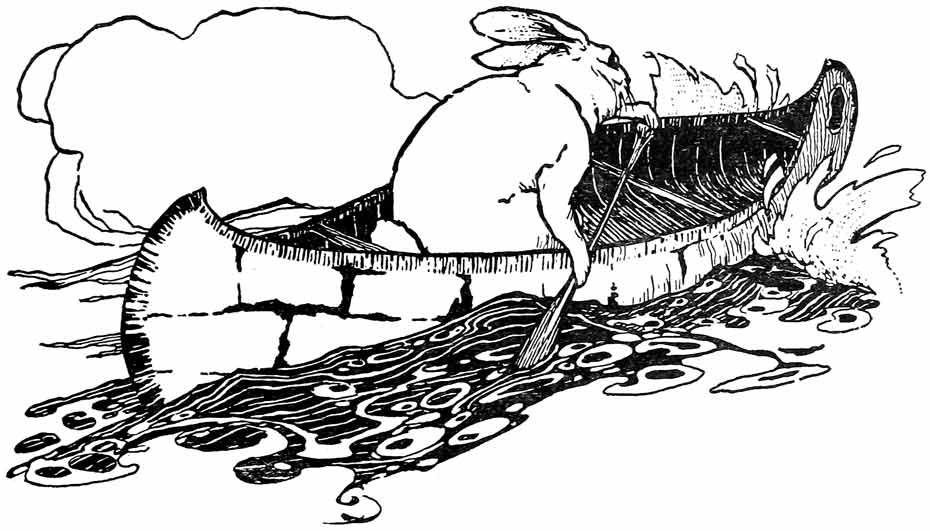 Then Manabozho went to Lake Superior to fish.

He dropped his line into the water, and said these words to the king of the fishes:

“King of the fishes, listen to me;
I gave you the power to rule in the sea.
You said you would always be kind and just,
A ruler the smallest of fishes could trust.
Yet you’ve done to the little ones nothing but wrong,
Because they are weak, and because you are strong.
You refused when I told you the evil to mend,
And to-day your bad ruling shall come to an end.
You shall die, for you richly deserve such a fate.
King of the fishes, take hold of my bait.”

The king of the fishes made no answer, so Manabozho said again, “Do you hear me? Me-she-nah-ma-gwai, take hold of my bait.”

Then the king of the fishes said, “Manabozho troubles me. Some one must go on the line, or he will never go away. Trout, you take hold.”

The Trout did so, and Manabozho began to haul in the line. But when he saw the Trout with the water gleaming on his dark scales, he frowned and said, “I do not want you on the line. Let go.”

So the Trout sank to the bottom of the sea, and Manabozho said again, “King of the fishes, take hold of my bait.”

Then the king of the fishes said, “Manabozho is tiring me with his commands. Sunfish, I order you to take his line.”

The great Sunfish did so, and the Rabbit drew him in. When he saw the golden scales of the Sunfish, Manabozho was angry.

When he heard this, the king grew angry. He used his magical powers to make himself larger. He swelled and swelled till he became enormous. Then he sprang to the surface of the water. Manabozho just had a glimpse of the great body with fins as large as a hillside, and mouth as big as a cavern. Then the fish swallowed both him and the canoe.

It was very dark inside the fish, but Manabozho was not afraid. He felt about in the canoe till he found his club. With this he struck at the heart of the fish. Me-she-nah-ma-gwai began at once to race through the water.

Manabozho did not like the motion, so he struck at the heart of the fish again. Soon he knew that he had killed him, because the fish gave a great shudder and lay still.

Then Manabozho began to crawl up to where he supposed the mouth of the fish was. But before he could reach it, he heard a tap-tapping on the body. It grew louder and louder. Soon a hole was made, through which rays of light came. Then he saw beaks making the hole larger. At last a gull put in his head.

“Ah, my dear gulls,” said Manabozho. “It is you who are helping me to get free.”

The gulls pecked harder than ever, and soon made the hole very large. Then the Rabbit sprang out. He turned to the gulls and said, “For the future you shall be called ‘Kayosh’ because you have been kind to me.” Kayosh means “noble rescuers.”

Manabozho towed the big fish ashore, and then ran home to his grandmother.

“Dear Maja,” he said, “if you will go down to the shore, you will find something to make oil of.”

Maja went down, and was amazed to see the monstrous fish. She cut off as much of his flesh as she could carry, and put it in a kettle and boiled it. And soon she had plenty of rich yellow oil. 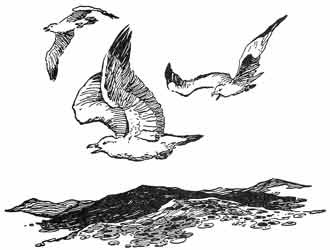 Through the house what busy joy, just because the infant boy has a tiny tooth to show!

‘Well, I’ll give my daughter to the one who jumps highest!’ said the king; ‘for it would look so mean to let these people jump for nothing!’