It chanced that once upon a time long years ago, in the days when strange things used to happen in the world, and the devil himself used sometimes to walk about in it in a bare-faced fashion, to the distraction of all good and bad folk alike, he came to a very small town where he resolved to stay a while to play some of his tricks. How it was, whether the people were better or were worse than he expected to find them, whether they would not give way to him, or whether they went beyond him and outwitted him, I don’t know, and so cannot say; but sure it is that in a short while he became terribly angry with the folk, and at length was so disgusted that he threatened he would make them repent their treatment of him, for he would punish them in a manner which should show them his power. With that he flew off in a fury, and the folk, knowing with whom they had to deal, were very sad thinking what terrible thing would overtake them, and at their wits’ end to imagine how they might manage to escape the claws of the Evil One.

Accordingly it was decided to call a meeting of the townsfolk, to which all, old and young, should come to deliver their opinion as to the best course to be pursued, only those too old to walk, the sick, and the foolish, being not called to the council.

Very many different courses were proposed, and while these were being debated a man rushed into the hall where the council was held, and informed them that their enemy was coming, for he had himself seen him making his way to the town, bearing on his shoulder a stone almost big enough to bury the place under it. He reported that the devil was yet a long way off, for his load hampered him sadly and he could not travel fast.

What to do the councillors did not know, when suddenly there came amongst them a poor cobbler, whom they had forgot to call to the meeting, for he was, indeed, looked upon as only half-witted. 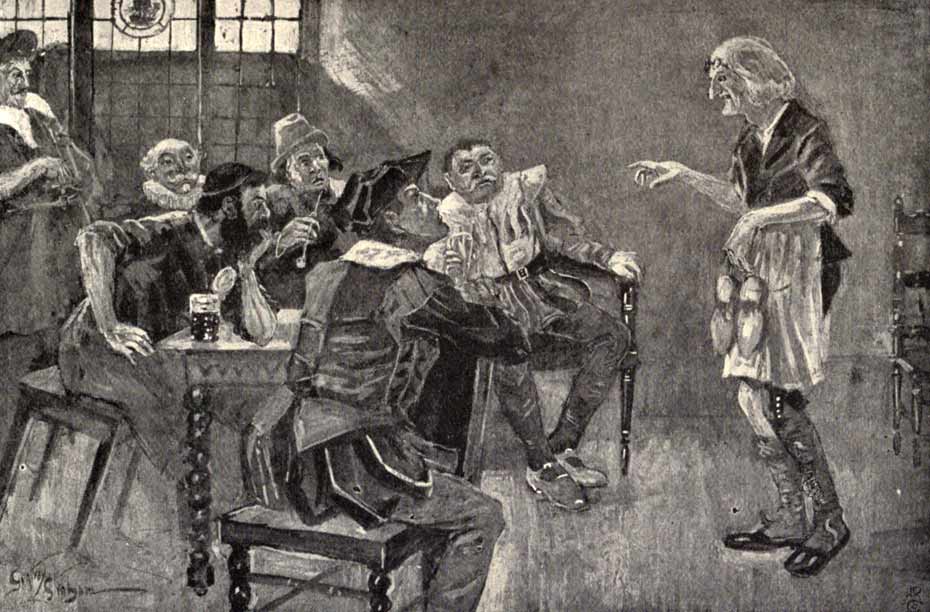 There came among them a poor cobbler

“I’ll go all the same,” said the cobbler, and without saying a word more he goes out and begins to make ready for his journey.

First of all he collected together as many old boots and shoes as he could find, and when he had got them all in a bundle, he finds out the man who had seen the devil coming on, and inquired of him the way he should go to meet him. The man told him the road, and the cobbler set out. He walked, and walked, and walked, till at last he came to the devil, who was sitting by the roadside resting himself and trying to get cool, for the day was warm, and he was nearly worn out with carrying the big rock which lay beside him.

“Do you know such-and-such a place?” asks he of the man, naming the town he would be at.

“I do, indeed,” says the man, “for I ought to, seeing I have lived in its neighbourhood these many years, and have only left there to travel here.”

“And how many days have you been getting here?” asked the devil anxiously, for he had hoped he was near the end of his journey.

“Oh, days and days,” replies the man. “See here,” and he opens his bundle of old boots that he had ready,—“see here,” says he, “these are the boots I’ve worn out on the hard road in coming from the place here.”

“Have you, indeed!” says the devil, looking at them amazed, little thinking that the man was lying as he showed him pair after pair, all in holes and shreds. “Well, indeed, it must be a long way off,” and he looks around him, and then at the rock, and thinks what a terrible long way he has had to bring it, and begins to doubt whether, after all, since he’s still got so far to go, it’s worth all the trouble.

“If it had been near,” says he, “it would have been a different thing, and I would have shown them what it is to treat me as they did, but as it’s so far off it’s another matter, and I don’t think it’s worth the trouble.”

So he just takes up the rock and flings it aside in a field, and goes off back again. So the cobbler came home, and told all the townsfolk what he had done, and how he had cheated the devil, and I can assure you that they all admired his cleverness, and the joke of tricking the devil as he had, nor did they allow him to lose in consequence of missing his day’s work.