How Wisdom became the Property of the Human Race

There once lived, in Fanti-land, a man named Father Anansi. He possessed all the wisdom in the world. People came to him daily for advice and help.

One day the men of the country were unfortunate enough to offend Father Anansi, who immediately resolved to punish them. After much thought he decided that the severest penalty he could inflict would be to hide all his wisdom from them. He set to work at once to gather again all that he had already given. When he had succeeded, as he thought, in collecting it, he placed all in one great pot. This he carefully sealed, and determined to put it in a spot where no human being could reach it.

Now, Father Anansi had a son, whose name was Kweku Tsin. This boy began to suspect his father of some secret design, so he made up his mind to watch carefully. Next day he saw his father quietly slip out of the house, with his precious pot hung round his neck. Kweku Tsin followed. Father Anansi went through the forest till he had left the village far behind. Then, selecting the highest and most inaccessible-looking tree, he began to climb. The heavy pot, hanging in front of him, made his ascent almost impossible. Again and again he tried to reach the top of the tree, where he intended to hang the pot. There, he thought. Wisdom would indeed be beyond the reach of every one but himself. He was unable, however, to carry out his desire. At each trial the pot swung in his way. 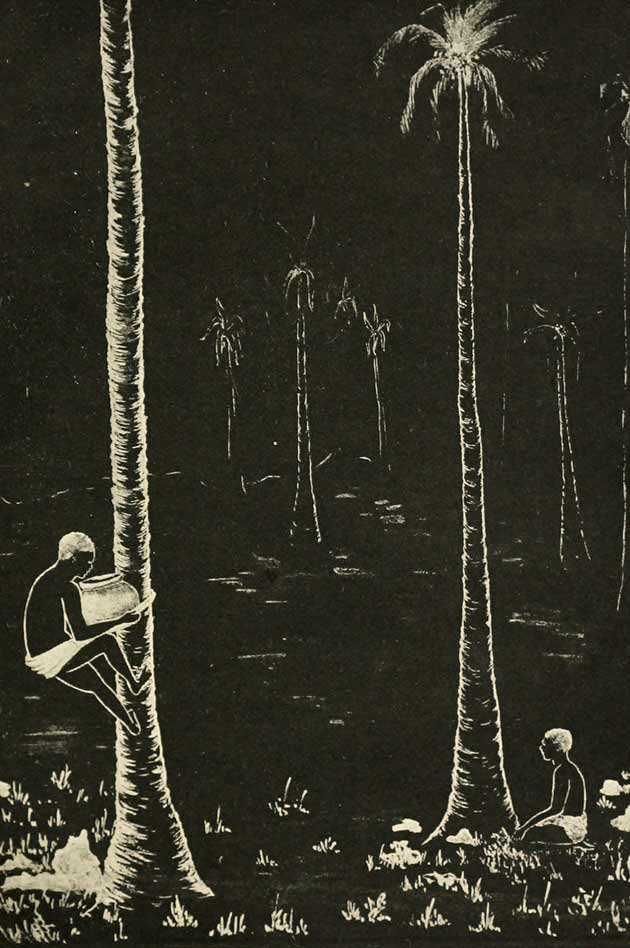 Again and again Anansi tried to climb the tree

For some time Kweku Tsin watched his father’s vain attempts. At last, unable to contain himself any longer, he cried out: “Father, why do you not hang the pot on your back? Then you could easily climb the tree.”

Father Anansi turned and said: “I thought I had all the world’s wisdom in this pot. But I find you possess more than I do. All my wisdom was insufficient to show me what to do, yet you have been able to tell me.” In his anger he threw the pot down. It struck on a great rock and broke. The wisdom contained in it escaped and spread throughout the world.