In a certain kingdom, in a certain land, lived Tsar Vwislav Andronovich; he had three sons, Dmitri Tsarevich, Vassili Tsarevich, and Ivan Tsarevich. Tsar Vwislav had a garden so rich that in no land was there better. In the garden grew many precious trees, with fruit and without fruit.

The Tsar grieved greatly over that apple-tree because the Fire-bird plucked from it many apples. Therefore he called his three sons and said: “My dear children, whichever one of you can catch the Fire-bird in my garden and take her alive, to him will I give during my life one half of the kingdom, and at my death I will give it all.”

Then the sons cried out in one voice: “Gracious sovereign, our father, we will try with great pleasure to take the Fire-bird alive.”

The first night Dmitri Tsarevich went to watch in the garden, and sat under the apple-tree from which the Fire-bird had been plucking the apples. He fell asleep, and did not hear the Fire-bird when she came, nor when she plucked many apples.

Next morning Tsar Vwislav called his son Dmitri Tsarevich, and asked, “Well, my dear son, hast thou seen the Fire-bird?”

“No, gracious sovereign, my father, she came not last night.”

The next night Vassili Tsarevich went to the garden to watch the Fire-bird. He sat under the same apple-tree, and in a couple of hours fell asleep so soundly that he did not hear the Fire-bird when she came nor when she plucked apples.

Next morning Tsar Vwislav called him and asked, “Well, my dear son, hast thou seen the Fire-bird?”

“Gracious sovereign, my father, she came not last night.”

The third night Ivan Tsarevich went to watch in the garden, and sat under the same apple-tree. He sat an hour, a second, and a third. All at once the whole garden was lighted up as if by many fires. The Fire-bird flew hither, perched on the apple-tree, and began to pluck apples. Ivan stole up to her so warily that he caught her tail, but could not hold the bird, she tore off, flew away; and there remained in the hand of Ivan Tsarevich but one feather of the tail, which he held very firmly. 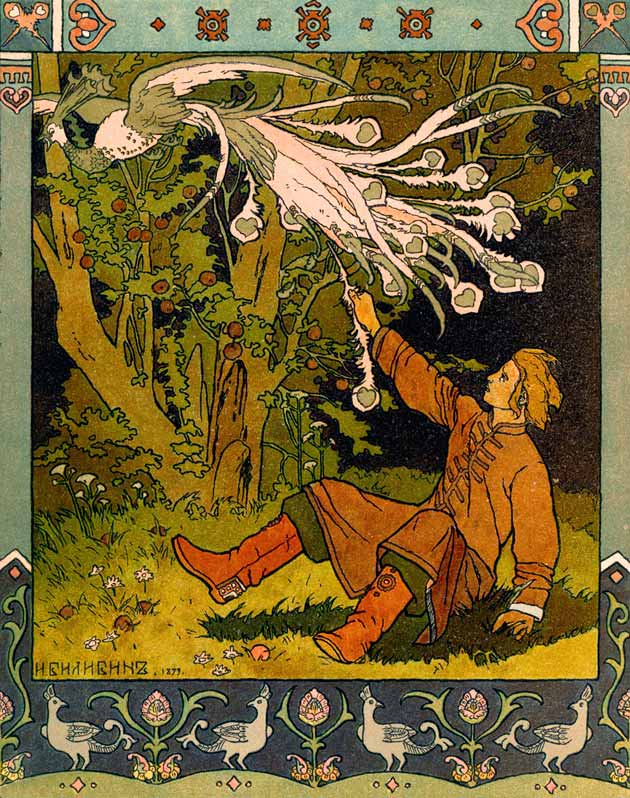 Next morning, the moment Tsar Vwislav woke from his sleep, Ivan Tsarevich went to him and gave him the feather of the Fire-bird. The Tsar was greatly delighted that his youngest son had been able to get even one feather of the Fire-bird. This feather was so wonderful and bright that when carried into a dark chamber it shone as if a great multitude of tapers were lighted in that place. Tsar Vwislav put the feather in his cabinet as a thing to be guarded forever. From that time forth the Fire-bird flew to the garden no more.

From Myths and folk-tales of the Russians, Western Slavs, and Magyars, by Jeremiah Curtin.Boston: Litle, Brown, and Company, 1903.

Find stories similar to Ivan Tsarevich, the Fire‑Bird, and the Gray Wolf

Silver-Locks peeped in, and soon found the place was empty; so the saucy puss made up her mind to go in boldly.

At last, as they were returning to the temple by way of the shore, the men-servants were startled by the sound of a biwa, furiously played, in the cemetery of the Amidaji.

Elves in Scotland: Dwellings and Mode of Life

Joy and mirth reign in such assemblies of the fairies; for they are particularly fond of dancing, and it is one of their chief occupations.