Our Ivanoushka journeyed and journeyed, how long we do not know, until at last he arrived at that island, struggled three days with the dragon and killed him on the fourth day. Then he began to tear down the locks. That took three days more. When he had done this he brought out the wonderful mare by the golden mane and turned homeward.

The road was long, and before he reached his town Ivanoushka, according to his habit, pitched his tent with a diamond top, and laid him down for rest. The brothers came along gloomy they were, fearing the Tsar’s anger. Lo! they heard neighing; the earth trembled it was the golden-maned mare! Though in the dusk of evening the brothers saw her golden mane shining like fire. They stopped, awakened Ivanoushka the Simpleton, and wanted to trade for the wonderful mare. They were willing to give him a bushel of precious stones each and promised even more.

Ivanoushka said: “Though my mare is not for trade, yet if you want her I’ll give her to you. And you, do you each give me your right ears.”

The brothers did not even argue, but let Ivanoushka cut off their ears, took hold of the bridle and went directly to the Tsar. They presented to him the golden-maned mare with diamond hoofs, and there was no end of bragging.

“We went beyond seas, beyond mountains,” the brothers said to the Tsar; “we fought the fiery dragon who bit off our ears and fingers; we had no fear, but one desire to serve thee faithfully; we shed our blood and lost our wealth.”

The Tsar Pea poured gold over them, created them the very highest men after himself, and planned such a feast that the royal cooks were tired out with cooking to feed all the people, and the cellars were fairly emptied.

The Tsar Pea was sitting on his throne, one brother on his right hand, the other brother on his left hand. The feast was going on; all seemed jolly, all were drinking, all were noisy as bees in a beehive. In the midst of it a young, brave fellow, Ivanoushka the Simpleton, entered the hall the very fellow who had passed the thirty-two circles and reached the window of the beautiful Tsarevna Baktriana.

When the brothers noticed him, one almost choked himself with wine, the other was suffocating over a piece of swan. They looked at him, opened wide their eyes, and remained silent.

“It is the exchange I got,” said Ivanoushka.

Tsar Pea became furious, stamped his feet, ordered the two brothers to be driven away with brooms. One was sent to feed the pigs, another to watch the turkeys. The Tsar seated Ivanoushka beside himself, creating him the highest among the very high. 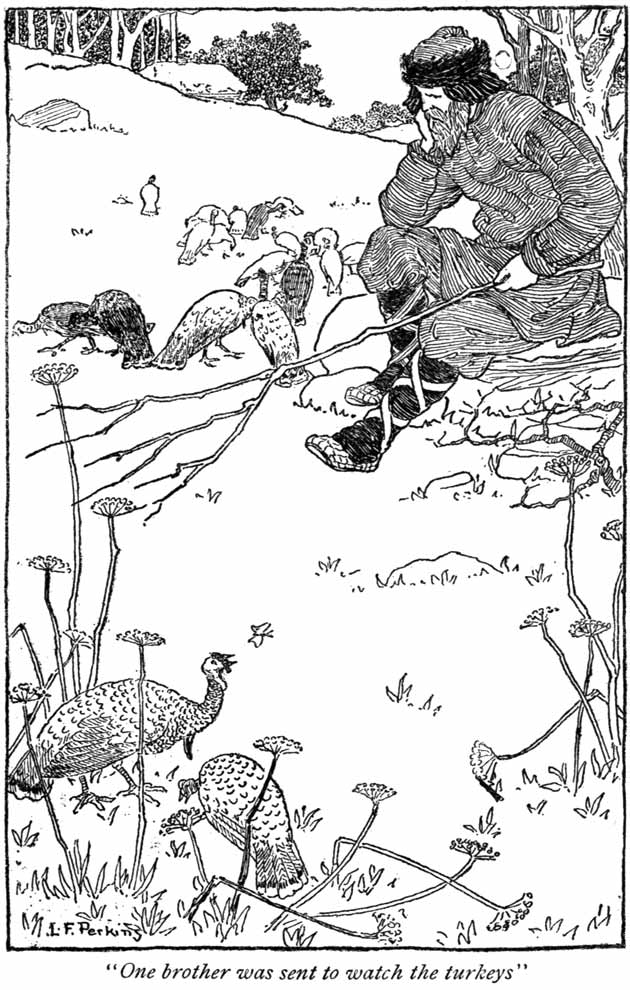 The feast lasted a very long time until all were tired of feasting.

Ivanoushka took control of the tsarstvo, ruling wisely and severely. After his father-in-law’s death he occupied his place. His subjects liked him ; he had many children, and his beautiful Tsaritza Baktriana remained beautiful forever.

No one would let it be known that he could see nothing, for that would have proved that he was unfit for office or that he was very, very stupid.

‘I will carry off a bag of cucumbers, which I will sell; with the money I will buy a hen. The hen will lay eggs, hatch them, and raise a lot of chicks.’

‘We know your Failing, but, my friend, you won't Grow Fat on that sort of Diet—good night.’