There was once a farmer’s wife who wished for a very little child—smaller than had ever been seen. So she went to a Fairy, who dressed sometimes as an old woman, and asked her for a tiny baby. The Fairy gave her a barleycorn, and told her to put it in a flower-pot (for it was not a common barleycorn), and when it grew into a flower she should have her wish. 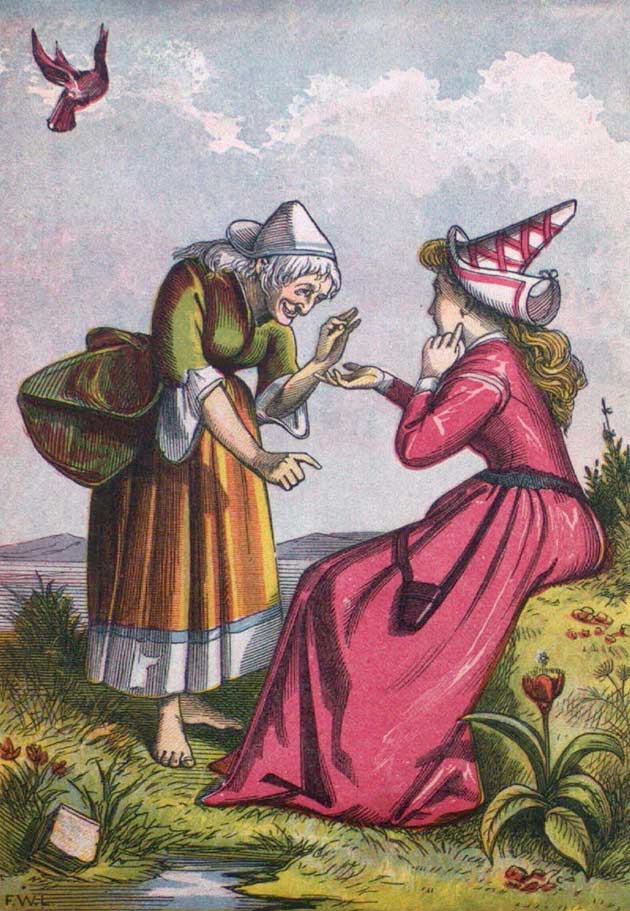 The very next day the farmer’s wife found that a tall beautiful flower just like a tulip had grown up in the pot. She thought it such a beautiful flower that she kissed its red and yellow leaves, and the moment her lips touched it the bud opened with a pop! It was a real tulip, and inside it she found the smallest little maiden ever seen—scarcely half a thumb’s length; so she called her Little Totty. 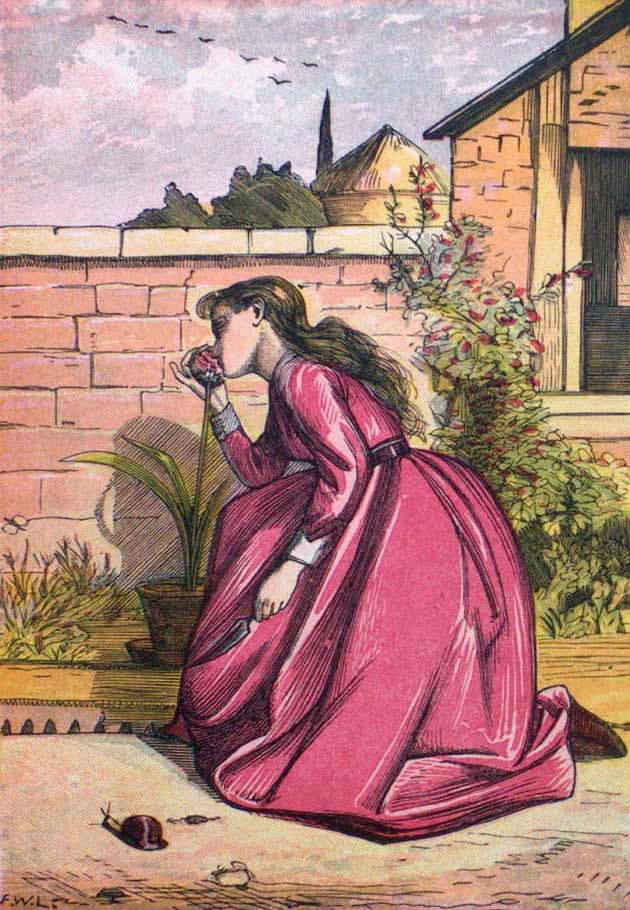 A polished walnut shell served Little Totty for a bedstead, with violet leaves for a mattress and rose leaves for a coverlet. Her mother used to put her on the table to play, and gave her a plate full of water, with a wreath of flowers round it, and a tulip leaf, on which Totty rowed about, with two white horse-hairs for oars. Then she looked pretty indeed! 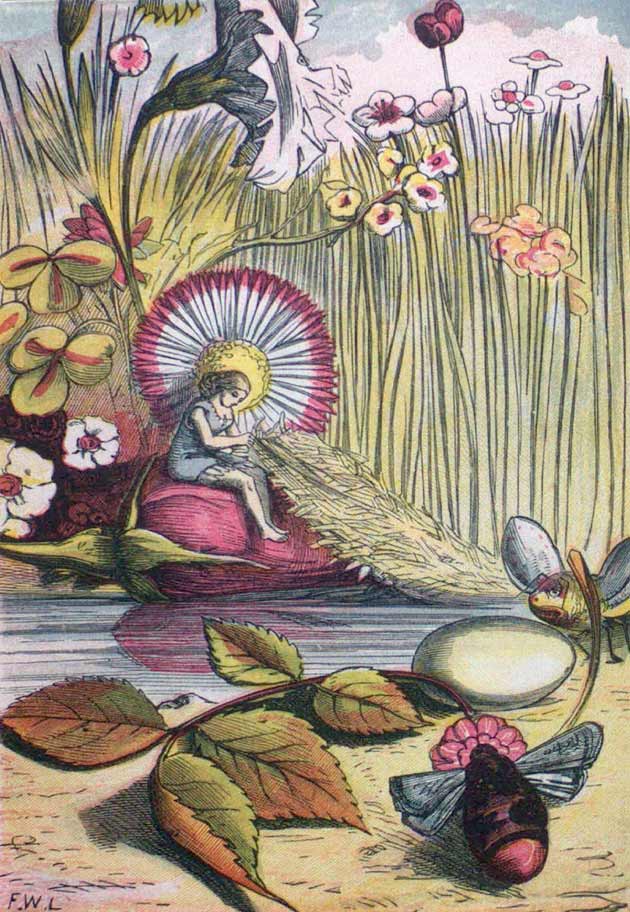 Little Totty never grew any bigger; but when she was old enough to be married, a wicked old Toad, who thought she would make a nice wife for her son, stole her from her tender mother, and carried her out into the middle of a pond, where she seated her on a rose-bud, and made her weave rushes for household linen to use when she should be married to her ugly son.

But the Fish, pitying poor Little Totty, bit the stem of the rose through, and she floated away upon the leaf, drawn by a beautiful white Butterfly, and did not marry the Toad after all. A big Cockchafer saw her, and fell in love with her, and clasped her round the waist, and flew away with her, intending to marry her. But the other cockchafers made fun of her because she was not like themselves, and then the Cockchafer did not care for her any more, and left her all alone. She lived in the woods all the summer, where the birds used to sing to her; but when winter came she was cold and hungry, and she knocked at the door of the Field Mouse, and asked for some barleycorns. 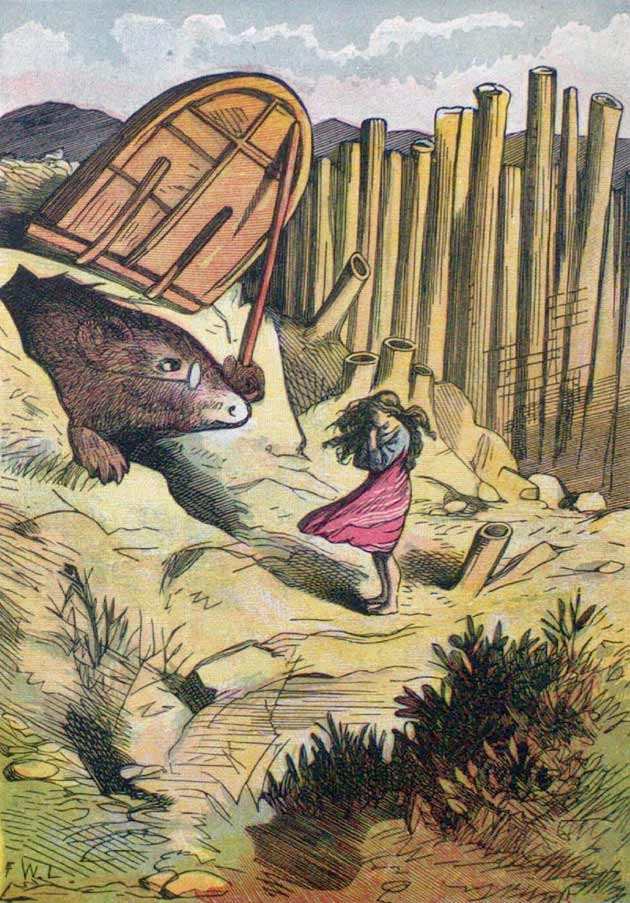 The Field Mouse took her in and was very kind to her; but she wanted to make Little Totty marry an ugly old Mole, who used to come to visit her, and the poor little maiden was very unhappy, because she did not like the Mole.

One day, just before she was to be married to the Mole, she went out into the fields to bid the bright sun good bye (for the sun does not shine into moles’ houses), when she saw a little Swallow whose life she had saved, and to whom she bad been very kind; and she told him all her trouble. Then the kind bird invited Little Totty to seat herself on his back, which she gladly did, and he flew away to the warm lands where it is always sunshiny, except at night. 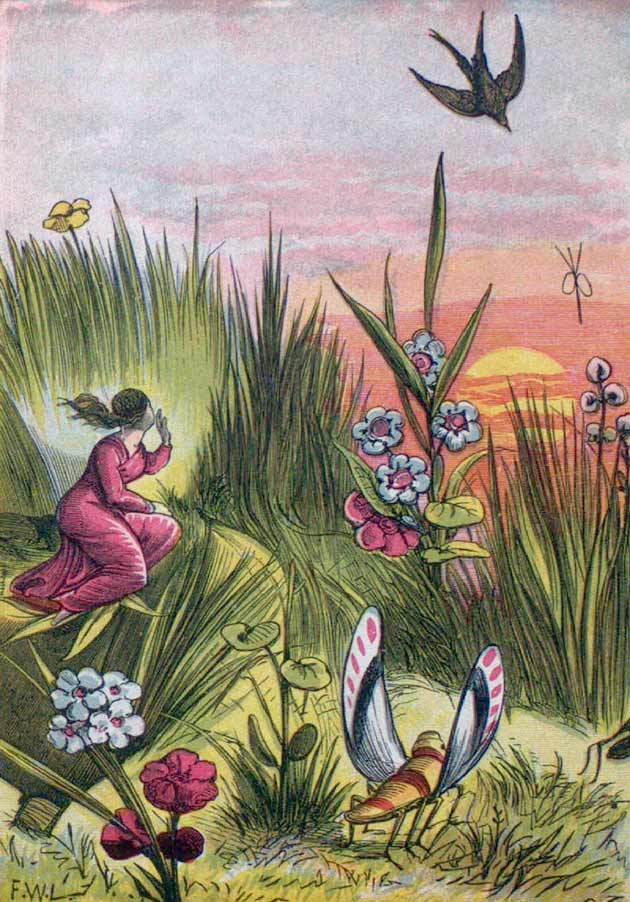 Then he put her down on a beautiful large white flower like a convolvulus, only prettier, and to her great surprise there sat a little man as transparent as glass, with wings, and a golden crown on his head; and he was no bigger than herself!

This was the King of the Flowers. In every flower in that part of the world dwelt a little man; but this one was King of them all.

When he saw the Swallow he was frightened, for he was quite a gigantic bird to the little King; but he was very glad to see Little Totty. He asked her name, and if she would be his wife, and then she would be Queen of the Flowers; and when she said “yes,” (for he was much nicer than the Toad or the Mole) he took his golden crown off, and put it on her head. And every flower sent forth its little Fairy, who brought her a present; but the best gift of all was a pair of beautiful wings, which they fastened to Little Totty’s back, so that she could fly from flower to flower. So the tiny maiden married the Flower Fairy, and lives in a lily-bell, which is quite as big a house as is required by Queen Totty. 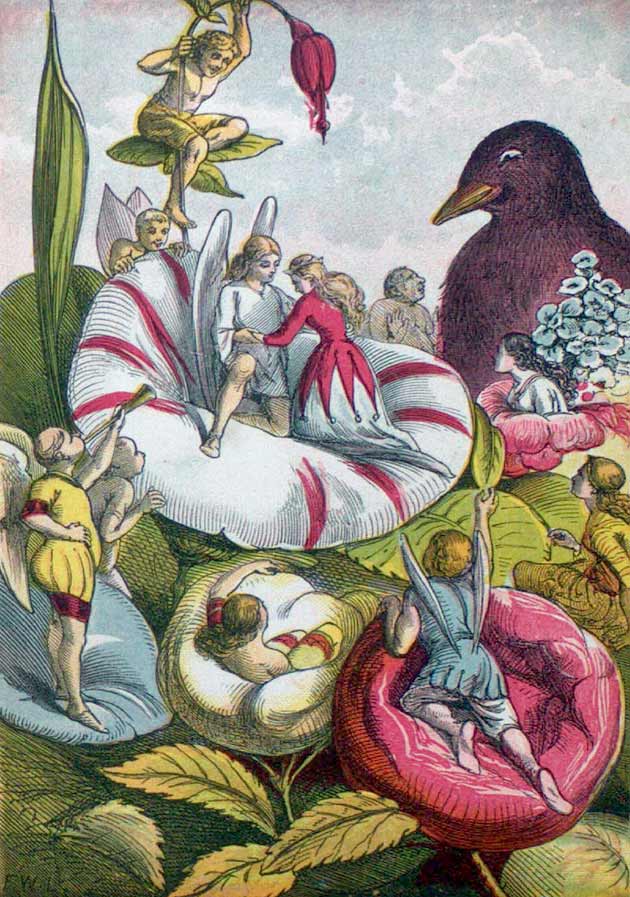 From Little Totty, and Other Nursery Tales.London: Frederick Warne and Co., 1859.