A soldier in Japan was once about to cross a bridge near a lake when he saw a huge snake coiled on the bridge so that no one could pass. Now, do you think that this soldier turned and ran away, as many others had that day? No, indeed! He knew that a bridge was not the place for a snake, so he walked up and stamped on its head.

As he stepped on him, the snake was gone. Only a dwarf stood before him, who at once began bowing his head to the ground with respect.

“Now, at last I have found some one who is not a coward!” cried the dwarf. “Here I have been waiting for days to find a man who was brave enough to help me, but none dared cross the bridge. Everyone turned and ran at the sight of me. But you are strong-hearted. Will you do me a great kindness and save many lives?”

“I am a soldier of the Emperor, and I am here to save life and right wrong. Tell me your trouble and I will see what can be done to help it.”

“There is a terrible centipede,” said the dwarf, “and he lives in the woods on the mountain. Every day he comes down to the shore to drink. He dips his thousand poisonous feet into the beautiful water, turning it all foul and dirty. It kills all the fishes in the lake, too. I am the king of the lake, and I am trying to find some way to save my fishes.”

“I do not know that I can help you,” said the soldier, “but I will gladly go with you and try.”

The dwarf took him to his home in the bottom of the lake. It was a beautiful house, all made of coral and pearl. His servants, the crabs and sunfishes, brought them rice, fruit, and tea, served on tiny green leaves. The tea looked like water and the rice looked like seafoam, but they tasted all right, so what matter?

Just as they were in the middle of their feast they heard a mighty roaring and rumbling. It sounded as though a mountain were being torn up.

“There he is!” he cried. “That is the noise of his thousand feet as they crunch on the stones of the mountain side. We must hurry or he will get to the water and poison it again.”

They hurried to the edge of the lake and saw the centipede already very near. He looked like an army marching with colored lanterns, for each one of his thousand legs glowed with many beautiful shades of crimson and green and gold. 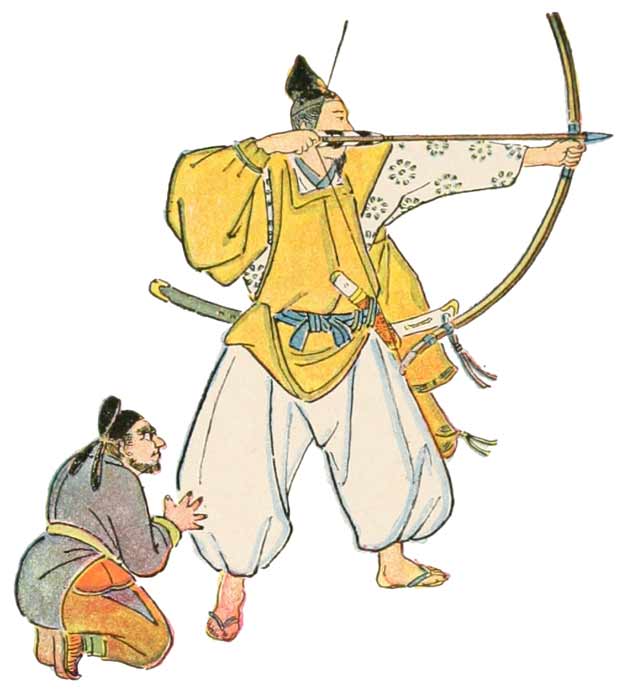 The soldier drew his great bow and let an arrow fly at the monster’s head. He never missed his aim, and the arrow struck the ugly head of the centipede, but bounced away. A second arrow flew, but that, too, bounced away.

He had but one arrow left and the monster was almost at the water’s edge.

Suddenly he remembered that when he was a boy his grandfather had told him that if you wet the head of an arrow in your mouth it will kill any monster.

It took just a second to wet the head of his last precious arrow and send it whizzing at the centipede. It struck him on the forehead and he fell over dead.

Suddenly the soldier found himself back in his own house, which was now changed into a castle. Before him were five gifts, on each of which he read, “With the loving thanks of the Dwarf.”

The first of these gifts was a huge bronze bell, on the outside of which was told in pictures the story of the centipede. The second was a sword which would always give its owner the victory. The third was a suit of armor so strong that no swords or arrows could go through it.

The last two were the most wonderful of all. One was a roll of silk of any color he wished, and the more he used of the silk the more the roll grew. The other was a bag of rice which never grew less, although he used all he wished for his friends and himself.

This last gift seemed so wonderful to the people that they called him Lord Bag of Rice from that day.