Manabozho’s Adventure with the Sea Serpent

The sea serpents were angry with Manabozho because he had killed the king of the fishes. So they determined to have revenge on him. They knew that he was very fond of his brother. And one day they coaxed the brother into the water.

The Rabbit came home at night and asked for his brother. His grandmother, Maja, said that she did not know where he was. Manabozho became anxious and went out to look for him.

Presently he saw Hega, the Buzzard, flying toward him.

Hega was the doctor for all the animals. 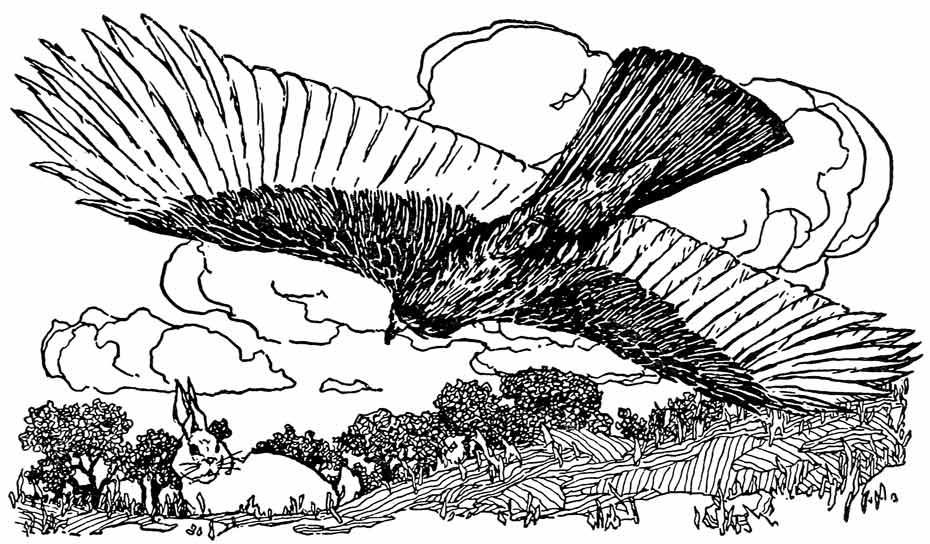 “I have just been visiting a sick serpent,” she said. “And he told me bad news. The prince of the serpents has taken your brother prisoner. Perhaps he is dead by this time.”

Manabozho felt very sad to hear this. He went home to Maja, and when he told her the news she wept all night.

“You told him to keep away from the water,” she said. “If he had obeyed you he would be with us now.”

The next morning Manabozho went down to Lake Superior. He peered into the water, but he could see nothing, as it was muddy. Then he noticed some ducks swimming about at some distance from shore. He changed himself into a brown leaf, and floated near them. He listened to what they said.

“Oh,” said one, “the War Eagle has told me some bad news. The brother of our good Manabozho is dead. The prince of the sea serpents killed him. They have made a door curtain out of his skin.”

Manabozho floated quietly away. Then he changed himself back into his own form. He wept very much for his brother. After a while he met the Kingfisher.

“Dear bird,” he said, “I cannot see very well, for my eyes are dim with weeping. Will you look into the water and tell me what you see?”

The Kingfisher peered for a long time, and then he said, “Oh, my poor Manabozho, the sea horses are playing with your brother’s bones.”

“I will collect the bones soon,” said Manabozho. “You are a kind bird, though you tell me bad news.”

Manabozho sat upon the sand and thought. He had only limited power. He could not kill the sea serpents in their own home, the water. He would have to catch them upon the land. After a while he changed himself into a brown stump.

In an hour or two, the lake, which had been rough, became perfectly calm. Then dark bodies rose to the surface of the water. They were black sea serpents. Hundreds of them crawled upon the beach. The last who came was the prince. He was entirely white. 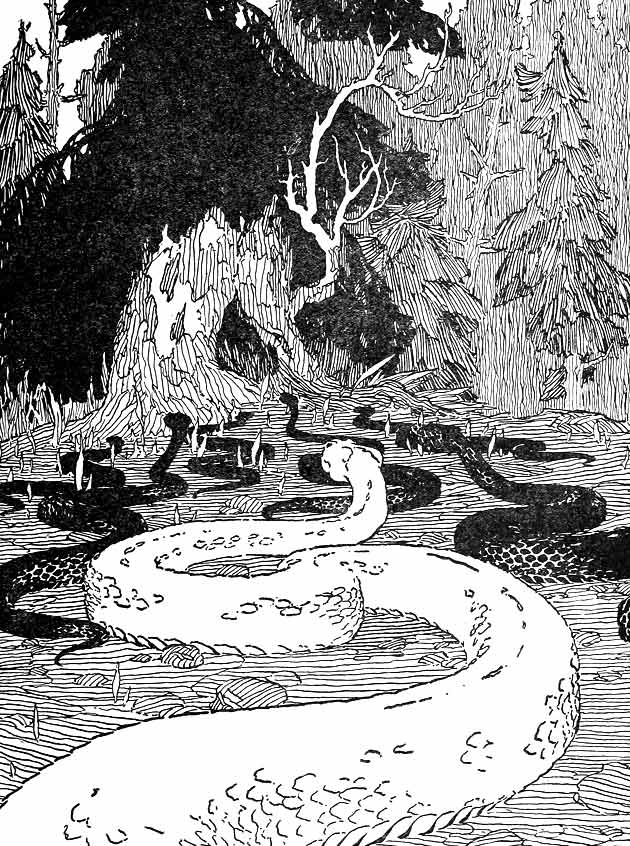 The last who came was the prince. He was entirely
white.

“Look,” said the sea serpents. “See the brown stump. Let us dance around it.” They began to crawl toward it.

“Stop,” said the prince; “I never saw that stump before. Perhaps it has always been here, but I do not think so. It may be Manabozho. You know how great his power is on the land. If we dance around the stump and fall asleep, then if the stump is Manabozho he can easily revenge himself on us for killing his brother.”

The prince thought for a moment, and then chose a very large sea serpent.

“Go,” he said, “and twist yourself as tightly as you can about the stump. Even Manabozho must cry out if your coils hurt him. If that stump cries out, we shall know that it is the White Rabbit.”

The big creature did as he was commanded. The pressure of his folds was very great. Manabozho was badly crushed. He was just about to cry out, when the sea serpent loosed his hold. Eight other serpents were sent by the prince; but always, just as Manabozho felt that he could bear the pain no longer, they dropped to the ground.

“No, it is not Manabozho,” they said.

Then they all coiled in a circle about their prince and talked. They rejoiced because they had killed Manabozho’s brother. Then they began to dance. They twisted their long bodies into loops, and arches, and knots, and queer figures of all kinds. When they were tired, they lay down to sleep.

After they were all asleep, Manabozho changed himself into his own shape. He went up to the white prince, and gripped his body in his paws. Then the prince waked up. But his struggles did not help him. Manabozho quickly killed him.

The other sea serpents woke up, but they were too frightened to act or speak.

“You need not be afraid,” Manabozho said to them. “You have well deserved punishment, but I shall show you mercy.”

They were so angry with him for killing their prince that they wanted to crush him to death, but they knew that they could not hurt him while he was on the land. Manabozho guessed their feelings, and he said:

“It is not worth while to be angry. Whoever does wrong is punished in some way or other. You have deserved to lose your prince, because you helped him to break my laws and to kill my brother. Do not hurt any more of my people. If you do, I shall not show mercy a second time.”

Then Manabozho went away. He got his brother’s bones, and he and Maja buried them sadly.