Manabozho’s Adventure with the Shining Magician

The land serpents were almost as angry as the sea serpents when they heard that Manabozho had killed the white prince. The other animals called these land serpents “the Bright Old Inhabitants” because they were very beautiful and because they had been in the country for a long time.

They were chiefly rattlesnakes of great size. They lived in rocky valleys crowned with cedar trees. Whenever they crawled about, the valleys flashed and gleamed with color. Some of the Bright Old Inhabitants were of the color of the Blue Heron. Others were crimson and yellow like maple leaves in autumn. Still others were like shining opals. 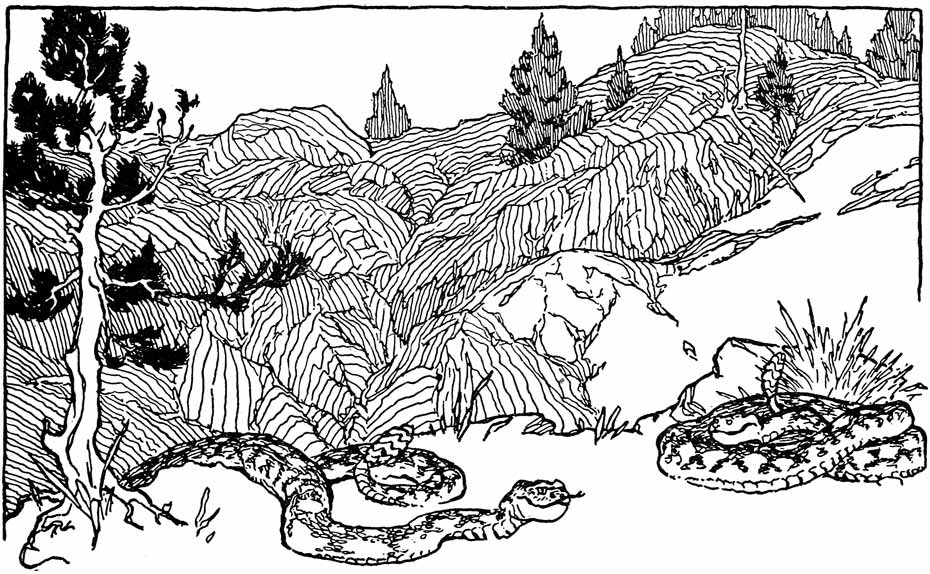 They had all come from the shores of the Lake of the Woods. One day the Great Father who first made the world was sitting by this lake. He twisted some of the shining sand into ropes. Then he recollected that there were many animals who could walk, trot, run, and hop, but not one that could crawl.

So he searched in the sand until he found some beautifully colored pebbles. He put two of these into one end of each of his sand ropes. Then he turned them into serpents and told them to crawl forever.

The serpents were good at first, and then, like most of the other animals, they became very bad. After that, the flood was sent to punish them, and Manabozho was made the ruler. But although most of the animals tried to be good after the flood, the beautiful land serpents did not.

They were cruel to the weaker animals, as the king of the fishes had been. They were also deceitful and vain. Whenever they could, they broke the good laws that Manabozho had made for the world.

Their ruler was a magician, just as the king of the fishes had been. He was called the Shining Magician. The serpents thought that he was just as great as Manabozho. They expected that he would some day kill Manabozho and rule over all the earth.

Manabozho heard of this. He decided not to wait till they attacked him, but to kill their ruler at once. He knew that this would frighten the other serpents and make them keep the laws he had made.

He knew that they kept a number of fiery serpents as sentinels outside their colony. So he made a kind of medicine called a charm, which had the power to put all animals to sleep.

It had in it the skin of a wild cat; a vine which had never borne fruit; the dry cone of a pine tree steeped in dew; the leaves of a mountain laurel; the claws of a tiger; the teeth of an alligator, and the ribs of a snail. All these he ground up to powder. Then he added water, which was dipped out of the lake with the shell of a butternut.

Manabozho took this charm and approached the fiery serpents. They were gliding up and down a narrow passage which led into the chain of valleys where the colony lived. Manabozho threw a few drops of the charm over them. This made them unable to move, and in a moment he ran past them.

Then he came to a wide lake in the middle of the first valley. It was called Pigiuwagtmiee, which means “pitch-water.” It was ugly to look at, and it felt soft and gummy when Manabozho put his paw in it. He knew that he could not walk on it.

He took his canoe, which he had carried with him, and rubbed it all over with some of the oil which Maja had made from the body of the king of the fishes. The oiled canoe slipped easily over the surface of the pitch-water, and soon Manabozho was at the other side.

Here he could see the home of the Shining Magician, which was at the top of a hill.

“Come here, Shining Magician,” called Manabozho. “I am Manabozho, the Great White Rabbit. I am going to fight with you and kill you because you and your people have broken my laws.”

At this the Shining Magician laughed. He was quite sure that he could kill Manabozho.

“Make ready your bow and arrows,” shouted the Shining Magician. “I shall soon take them away from you and kill you.”

The two came close to each other. The Great White Rabbit shot well. But though arrow after arrow struck the Shining Magician, not one pierced his thick skin. He shot back at Manabozho rapidly. But Manabozho jumped about so nimbly that he was not touched.

So the fight went on. Neither was hurt, and neither gained any advantage. But by and by Manabozho began to feel very tired.

Just then Ma-Ma, the large Woodpecker, flew by. She lighted on a tree, and said to the Rabbit: “Manabozho, there is only one place where you can hurt the Shining Magician. That is on the crown of his head.”

Manabozho was glad to hear this, for he had only three arrows left. He shot one, and drew a little blood from the crown of his enemy’s head. The second arrow went deeper, and the Shining Magician rolled over in fury. Then Manabozho shot an arrow just in the middle of his crown. And the great Shining Magician died.

Then Manabozho called the Woodpecker to him. He took a little blood from the wound of the Shining Magician, and rubbed it on the tuft feathers of Ma-Ma.

“You were a brave bird to help me,” he said, “for the Shining Magician might have killed you as you were doing it. After this you shall always have a beautiful red head. The Indians will use your tuft feathers to ornament the stems of their pipes. And these tuft feathers shall always stand for bravery.”

The Woodpecker was well pleased and flew away happily. Then Manabozho went home, sure that it would be a long time before the land serpents would again break his laws.