In a certain kingdom, in a certain realm, once lived Prince Ivan and his three sisters. One was Princess Marya, the second was Princess Olga, and the third was Princess Anna. Their father and mother were dead. When they were dying they gave this command to their son: “Whoever comes wooing your sisters first, let them have them. Don’t keep them long in your house!”

The prince buried his parents, and full of grief went with his sisters to walk in the green garden. Suddenly a black cloud arose in the sky and a terrible storm came on them.

They had hardly got indoors ere the thunder crashed, the ceiling cracked, and a bright Hawk flew down through it into the room where they were. As soon as the Hawk touched the floor, he turned into a fine young man who said:

“Your health, Prince Ivan. Hitherto I have been here as your guest, now I have come as a suitor. I should like to take your sister, the Princess Marya, as my wife.”

“If my sister likes you I have no objection. Let her go with you under God’s care.”

The Princess Marya was willing; so the Hawk took her as his wife and carried her off to his kingdom.

Days followed days, hours trod on the heels of hours. Almost a whole year had passed. Prince Ivan and his two sisters went to stroll in their green garden. Again a cloud came up with a fierce wind, with lightning. “Come, sisters, let us go into the house!” said the prince.

They had hardly got indoors ere a thunderbolt struck the roof, which tumbled in, the ceiling split, and an Eagle flew down. As soon as the Eagle touched the floor it became a fine young man:

“Good day to you, Prince Ivan,” he said. “Hitherto I have visited you as a guest, but now I have come as suitor.” And he asked for the hand of Princess Olga. 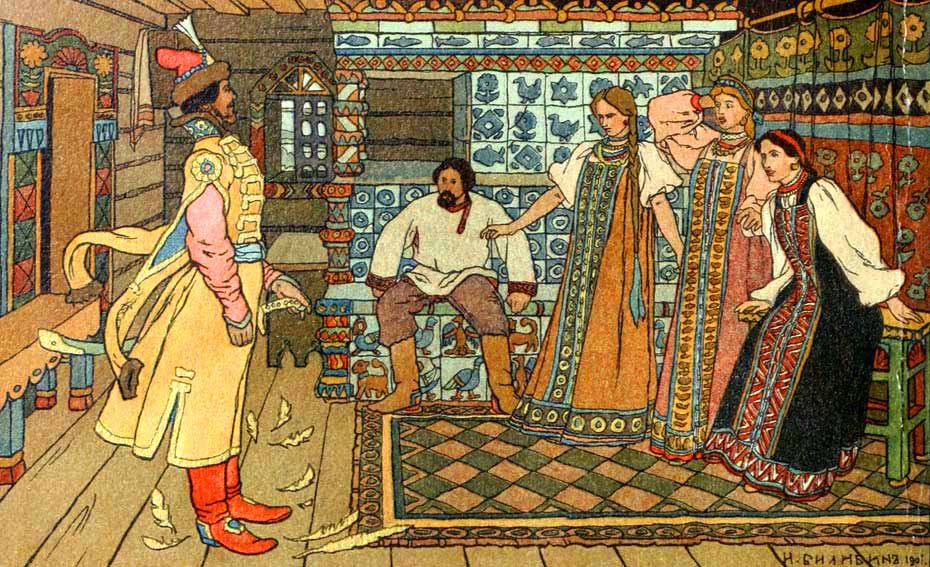 “If you please Princess Olga, let her go with you; but I do not force her against her will.”

Princess Olga consented and became the Eagle’s wife. The Eagle caught her up and bore her away to his kingdom.

Still another year passed. Prince Ivan said to his youngest sister: “Come, let us walk in the green garden.”

They had been strolling about a little while when again a cloud appeared with a fierce wind and with lightning. “Come, sister, let us go home,” he said.

They went into the house, and hardly had they sat down when there was a crash of thunder, the ceiling split, and a Raven flew down to them. As soon as the Raven touched the floor it turned into a fine young man. The other birds had been fine, but this was the finest of all.

“Well, Prince Ivan,” he said, “hitherto I have come as a guest, but now I am here as a suitor. Give me Princess Anna.”

“I do not control my sister’s will; if you are in love with her, let her go with you.”

Princess Anna followed the Raven and he took her to his realm. Prince Ivan remained alone. A whole year he lived without his sisters, and his life became dull to him. Said he: “I am going to find my sisters.”