A farm-steading situated near the borders of Northumberland, a few miles from Haltwhistle, was once occupied by a family of the name of W— K—n. In front of the dwelling-house, and at about sixty yards’ distance, lay a stone of vast size, as ancient, for so tradition amplifies the date, as the flood.

On this stone, at the dead hour of the night, might be discerned a female figure, wrapped in a grey cloak, with one of those low-crowned black bonnets, so familiar to our grandmothers, upon her head. She was incessantly knock, knock, knocking, in a fruitless endeavour to split the impenetrable rock. Duly as night came round, she occupied her lonely station, in the same low crouching attitude, and pursued the dreary obligations of her destiny, till the grey streaks of the dawn gave admonition to depart. From this, the only perceptible action in which she engaged, she obtained the name of Nelly, the Knocker. 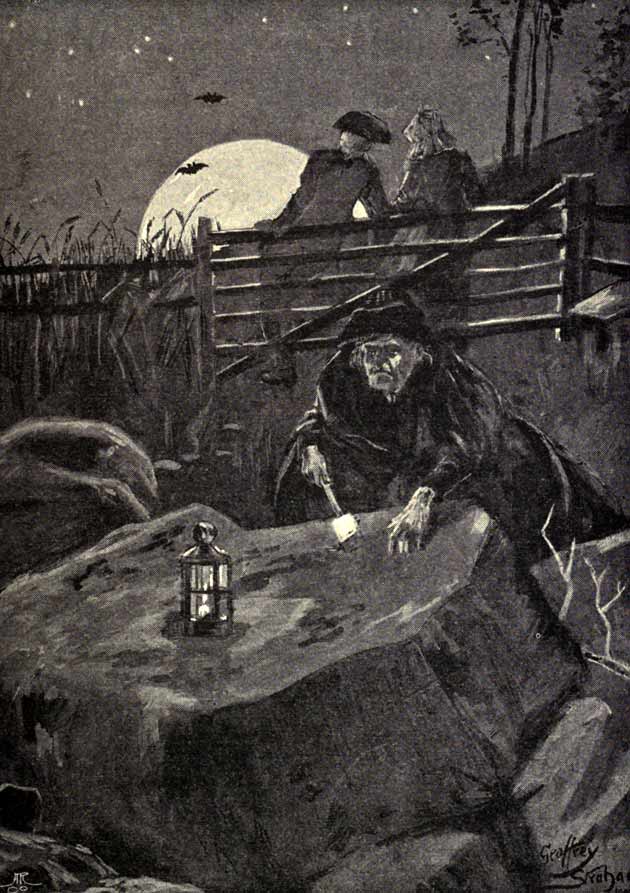 So perfectly had the inmates of the farmhouse in the lapse of time, which will reconcile sights and events the most disagreeable and alarming, become accustomed to Nelly’s undeviating nightly din, that the work went forward unimpeded and undisturbed by any apprehension accruing from her shadowy presence. Did the servant-man make his punctual resort to the neighbouring cottages, he took the liberty of scrutinising Nelly’s antiquated garb that varied not with the vicissitudes of seasons, or he pried sympathetically into the progress of her monotonous occupation, and though her pale, ghastly, contracted features gave a momentary pang of terror, it was rapidly effaced in the vortex of good fellowship into which he was speedily drawn. Did the loon venture an appointment with his mistress at the rustic style of the stack-garth, Nelly’s unwearied hammer, instead of proving a barrier, only served, by imparting a grateful sense of mutual danger, to render more intense the raptures of the hour of meeting. So apathetic were the feelings cherished towards her, and so little jealousy existed of her power to injure, that the relater of these circumstances states that on several occasions she has passed Nelly at her laborious toil, without evincing the slightest perturbation, beyond a hurried step, as she stole a glance at the inexplicable and mysterious form.

An event, in the course of years, disclosed the secrets that marvellous stone shrouded, and drove poor Nelly for ever from the scene so inscrutably linked with her fate.

Two of the sons of the farmer were rapidly approaching maturity, when one of them, more reflecting and shrewd than his compeers, suggested the idea of relieving Nelly from her toilsome avocation, and of taking possession of the alluring legacy to which she was evidently and urgently summoning. He proposed, conjointly with his father and brother, to blast the stone, as the most expeditious mode of gaining access to her arcana, and, this in the open daylight, in order that any tutelary protection she might be disposed to extend to her favourite haunt might, as she was a thing of darkness and the night, be effectually countervailed. Nor were their hopes frustrated, for, upon clearing away the earth and fragments that resulted from the explosion, there was revealed to their elated and admiring gaze, a precious booty of closely packed urns copiously enriched with gold.

Anxious that no intimation of their good fortune should transpire, they had taken the precaution to despatch the female servant on a needless errand, and ere her return the whole treasure was efficiently and completely secured. So completely did they succeed in keeping their own counsel, and so successfully did their reputation keep pace with the cautious production of their undivulged treasures, that for many years afterwards they were never suspected of gaining any advantage from poor Nelly’s “knocking”; their improved appearance, and the somewhat imposing figure they made in their little district, being solely attributed to their superior judgment, and to the good management of their lucky farm.