There was a falconer and hunter, named Sonjo, who lived in the district called Tamura-no-Go, of the province of Mutsu. One day he went out hunting, and could not find any game. But on his way home, at a place called Akanuma, he perceived a pair of oshidori* (mandarin-ducks), swimming together in a river that he was about to cross. To kill oshidori is not good; but Sonjo happened to be very hungry, and he shot at the pair. His arrow pierced the male: the female escaped into the rushes of the further shore, and disappeared. Sonjo took the dead bird home, and cooked it.

* From ancient time, in the Far East, these birds have been regarded as emblems of conjugal affection. 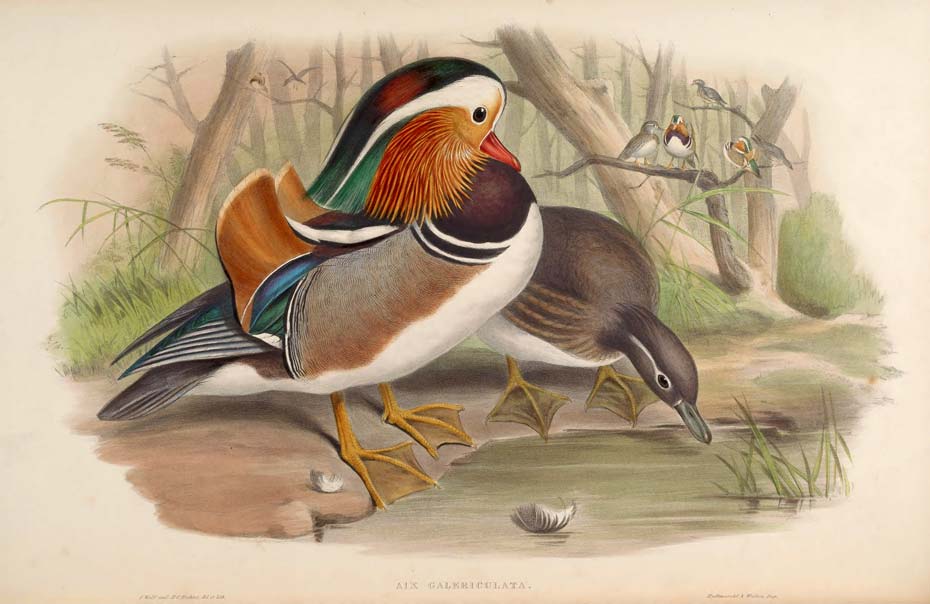 Madarin ducks, illustration from “Birds of Asia” by John Gould, 1850.

That night he dreamed a dreary dream. It seemed to him that a beautiful woman came into his room, and stood by his pillow, and began to weep. So bitterly did she weep that Sonjo felt as if his heart were being torn out while he listened. And the woman cried to him: “Why, oh! why did you kill him? of what wrong was he guilty? At Akanuma we were so happy together, and you killed him! What harm did he ever do you? Do you even know what you have done? oh! do you know what a cruel, what a wicked thing you have done? Me too you have killed, for I will not live without my husband! Only to tell you this I came.” Then again she wept aloud, so bitterly that the voice of her crying pierced into the mar row of the listener’s bones;—and she sobbed out the words of this poem:

(“At the coming of twilight I invited him to return with me—Now to sleep alone in the shadow of the rushes of Akanuma—ah! what misery unspeakable!”)

* There is a pathetic double meaning in the third verse; for the syllables composing the proper name Akanuma (“Red Marsh”) may also be read as akanu-ma, signifying “the time of our inseparable (or delightful) relation.” So the poem can also be thus rendered: “When the day began to fail, I had invited him to accompany me! Now, after the time of that happy relation, what misery for the one who must slumber alone in the shadow of the rushes!” The makomo is a sort of large rush, used for making baskets.

And after having uttered these verses she exclaimed: “Ah, you do not know—you can not know what you have done! But to-morrow, when you go to Akanuma, you will see, you will see…” So saying, and weeping very piteously, she went away.

When Sonjo awoke in the morning, this dream remained so vivid in his mind that he was greatly troubled. He remembered the words: “But to-morrow, when you go to Akanuma, you will see, you will see.” And he resolved to go there at once, that he might learn whether his dream was anything more than a dream.

So he went to Akanuma; and there, when he came to the river-bank, he saw the female oshidori swimming alone. In the same moment the bird perceived Sonjo; but, instead of trying to escape, she swam straight towards him, looking at him the while in a strange fixed way. Then, with her beak, she suddenly tore open her own body, and died before the hunter’s eyes.

Sonjo shaved his head, and became a priest.