There once once lived an old man and an old woman who had no child of their own. They felt very sad about this, for they said: “Who will care for us when we are too old to care for ourselves?”

Since they had no children of their own to love, they loved all other children and tried to make them happy. Even the cats and dogs, the birds and squirrels, knew they had friends in the old man and woman.

No cherry trees ever bore such beautiful blossoms as the ones by their cottage door, and all the bees of the village came to hum with delight at the long and graceful catkins on their willow tree.

One day the old man said: “To-day I must go to the mountains to cut grass. Oh, if I only had a stout young boy who could take this long journey for me! But then I must not complain, for we have each other.” So off he went, happy and contented, in spite of it all.

Then the old woman said to herself: “If my good husband must take such a long, hard journey to-day, I, too, will be at work. I will take all these clothes down to the river and wash them.”

Soon she was on the river bank, washing merrily, while the birds sang above her. “How jolly our little friends are to-day!” thought the old woman. “They twitter and sing as though they were trying to tell me a secret.”

Just then something came splashing and tumbling down the river and caught among her clean clothes. The old woman took a stick and pulled it out. It was a huge peach.

“I will take this home for my husband’s supper; he will be so tired, and this will taste very good,” she said. Oh! how the birds sang then!

That evening when the old man came home from the mountains his wife said: “Just see, here is a peach for your supper, which came floating down the river to me. I fancy the birds must have sent it, for they laughed and sang so when it came.”

The old man said: “Bring me a knife, that I may cut it in two, for you shall have half of it.”

When they opened the peach, there within it lay a tiny baby boy, as round and fat and smiling as could be. Because of his first cradle they called him “Peach Darling,” and loved him as a child sent from the gods.

As he grew tall and strong, they found that he was indeed wonderful. No one equaled him in strength, and none in wisdom. Every child in the village loved him, and all the birds and animals were his friends.

He took good care that his old father and mother should not have to work hard as they once did. “For,” he said, “what better thing can I do than take care of you?”

When he became a young man he heard of the terrible monster, Akandoji. Years before, this monster had stolen a great deal of gold and silver from the villagers. It was said that he was so terrible that no one dared go against him, to try to recover the riches.

Peach Darling said: “I will go and fight this monster. Who will go with me?” But no one dared go, so he decided to go alone.

His father and mother were proud of their brave son, but their hearts ached to think of his going alone. His mother said to his father: “If you will grind me some fine millet seed, I will make our son some dumplings, for they may give him more strength to fight Akandoji.” So the old man ground the millet seed, and the old woman made the dumplings.

Peach Darling put them into his pouch and started off on his journey. As he was going along a dog came up and sniffed hungrily at the dumplings. Peach Darling thought, “This poor dog is hungry, and I can do with one less dumpling. I am strong and shall not mind hunger.” So he gave a dumpling to the dog.

As soon as the dog had eaten it he spoke and said: “Since you gave me of your food, I will go with you, for I cannot leave you alone.” So on they went together.

Very soon they saw a monkey lying by the road, gasping as if in pain. Peach Darling stopped to see what was the matter and heard him saying: “Oh, if I only had a bite of something, I should not die.” Peach Darling took another dumpling from his pouch and gave it to the monkey. 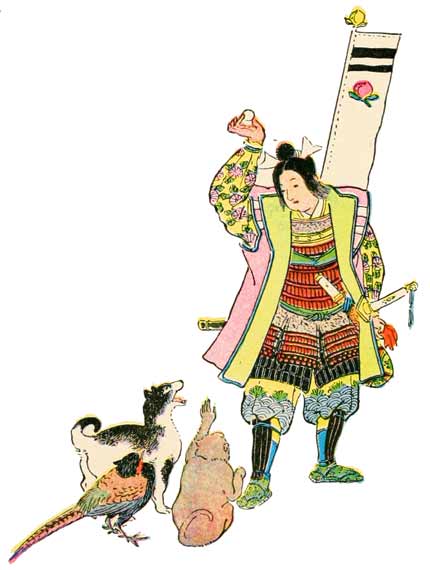 After eating it the monkey was so much better that he said: “Since you have saved my life I will go with you, for I may be able to help you sometime.” So the three walked off together.

As they were going, a pheasant hovered near them. Fearing that something might be wrong with her or her young ones, Peach Darling stopped and asked her what troubled her. In bird language she said: “Oh, sir, my young ones are starving. I do not know what to do!”

“Do?” said Peach Darling. “Take them this dumpling, and if ever again you are hungry, come to me. I will not let you starve.”

By this time they were down to the seashore, so they climbed into a boat and started off for the island of Akandoji. Just as they were starting there was a flutter of wings and the pheasant alighted in the boat with them.

“Dear Peach Darling,” she said, “if you are going to face dangers, I will go, too, for perhaps I may be able to help you.”

After a long row they reached the monster’s island, and climbed the steep hill to the gate of the castle. Here they found the monkey of great use, since he always has four hands and four feet as well as a long, strong rope fastened to his body.

When they reached the great gate of the castle, they all four began to make the greatest noise possible. The man shouted, the dog barked, the pheasant screamed, and the monkey chattered, while they all beat on the door with stones.

The people within thought that a great army was upon them, so they threw open their gates and fled.

Peach Darling searched until he found Akandoji himself, who was just about to throw a great stone at him. He dodged the stone and picked the monster up in his arms, while the monkey tied him fast with ropes. When he found himself beaten, Akandoji agreed to return all his stolen riches. So his men carried down great bags of gold and loaded the boat of Peach Darling. 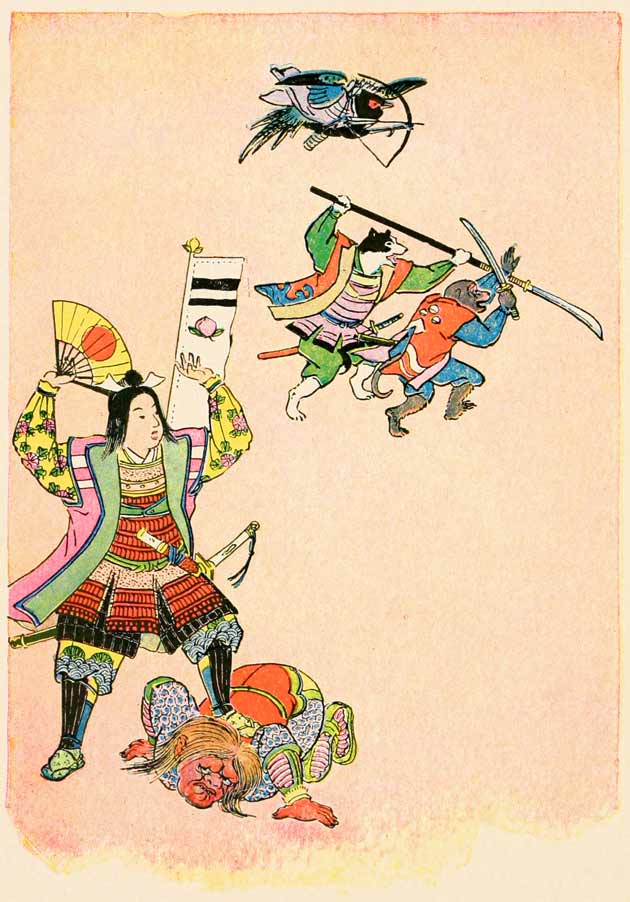 The dog, the pheasant, the monkey, and Peach Darling conquer Akandoji.

Then up went the sail, and as the wind swept them over the sea, the island of Akandoji grew small and disappeared.

All the village was glad when they returned, but none were so glad as the old man and woman. The people were now very proud of Peach Darling, and called him a great man, but he said: “Give all the honor to my three companions, for they did it all.” Peach Darling lived many years, and was always kind and wise. Many people of the village came to him for help.

Once the people brought him a wonderful peach fashioned out of gold. They said: “We all love you for bringing back our riches to us, but we love you far, far more for your wisdom and kindness to us.” 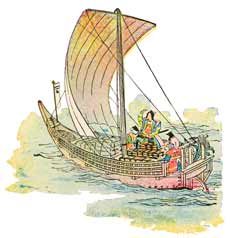