Among the favourites of Prince Darling was a foster-brother, who shared all his secrets. He was a bad man, brought up among people of low tastes. He kept himself in the Prince’s favour by flattering him and encouraging his evil habits. As he saw that the Prince looked sad, he asked him the cause. The Prince told him that he was hurt by the contempt Zelia had shown him, for he knew he had deserved it, and he had just made up his mind to change his manner of living, as he felt he could never win Zelia’s love unless he became a good man.

“You would change your ways because of the opinion of a country girl! You are surely very kind!” sneered the foster-brother. “If I were in your place, I should soon teach her her proper place. Have you forgotten what is due to your rank as King, and how humiliating it would be for you to be ruled by the opinions of a mere peasant who ought to be proud to be one of your slaves? Shut her up. Give her nothing but bread and water, and if that does not bring her to her senses, torture her to death, as a lesson to everyone who disobeys you. You would be disgraced for ever if people thought a girl could resist you, and your subjects would forget that they only exist for your pleasure.”

“But,” replied the Prince, “should I not be still more disgraced if I were to cause the death of an innocent girl? For, after all, Zelia has done nothing wrong.”

“No one is innocent who refuses to do your bidding,” said this false man; “but it would be better for you to be accused of injustice than to be looked on as a contemptible weakling whom your subjects may despise or contradict when they like.”

The flatterer had touched the Prince on his weakest side, for he was vain and proud of his power, so the fear of losing his authority made him listen to this bad advice and stifle his desire to be a better man.

The foster-brother saw that he had shaken the Prince’s resolution, and in order to follow up the advantage he had gained, he got three of the worst of the Prince’s bad companions to come to sup with him that evening. They put a drug in the Prince’s wine, knowing that it would madden him; then they twitted him with being under the thumb of an ignorant country girl, who could snap her fingers at him when she chose.

The Prince, no longer master of himself, rose and swore he would be revenged; then, with his drunken companions, he staggered off toward Zelia’s room, of which he had the key. He unlocked the door, and with derisive oaths they all reeled in, to find the room empty!—Zelia was not there!

The Prince’s anger knew no bounds. He vowed that he would severely punish anyone who could even be suspected of having helped Zelia to escape. His companions, hearing what he said, determined to seize the opportunity to ruin Suliman, the Prince’s former tutor, whom they hated and feared because he was good and just, and had tried to persuade the Prince to give up his bad habits.

Suliman loved the Prince sincerely, and at first Darling had taken his advice, but latterly he had resented it, and banished the good tutor from the Court.

The Prince, nevertheless, respected Suliman in his heart, and was often heard to speak of him as a good, just man, though he did not wish his interference, and would not have him near the palace.

The bad companions had always feared that Darling might change his mind and recall Suliman, so they now invented a story to the effect that some people had heard Suliman boast that he would let Zelia out of the room where she was imprisoned. This story they told to the Prince, who at first could hardly believe it, but they bribed three other bad men to swear they had heard Suliman say so. On hearing this, the Prince was beside himself with rage, and ordered his foster-brother to send soldiers to bring Suliman to the palace in chains like a criminal.

After giving this order, Prince Darling retired to his room to brood over his loss.

As he entered, a terrible peal of thunder shook the palace to its foundations, and he felt the ground trembling beneath him; then the Fairy Candour appeared. In a severe voice she said:

“I promised your father to give you good advice, and to chastise you if you refused to follow it. You have chosen to despise my warnings and to act contrary to my advice. As a consequence you have destroyed your manhood, and have nothing left but the outward form of a man. Your evil deeds have changed you into a monster, abhorred by both heaven and earth. It is time for me to fulfil my promise by meting out your punishment. I shall now take from you even the semblance of a man, and you shall become like the beasts whose habits you have acquired. You have been like a lion in fury, a wolf in greed, a serpent in ingratitude, and a bull in brutality. In your new form I condemn you to bear a resemblance to all these animals.” 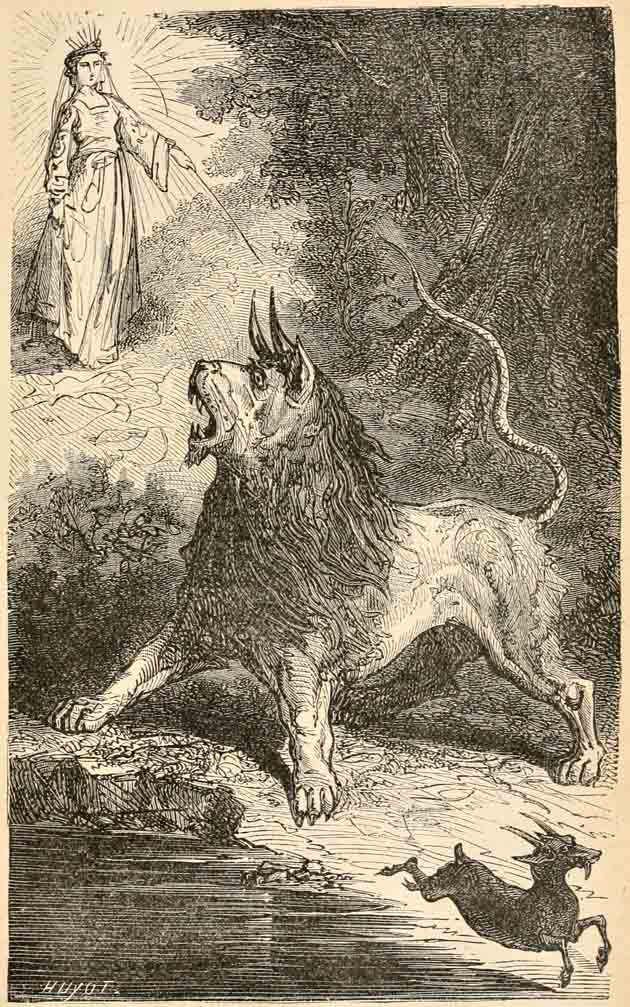 Candour had hardly finished speaking when the Prince found, with horror, that he had taken the form she described. He had the head of a lion, the horns of a bull, the legs of a wolf, and the tail of a serpent. He found himself in a great forest, beside a clear stream in which he saw the reflection of his horrible appearance, and he heard a voice from above him saying:

“Look at yourself and consider carefully the state to which your vices have brought you; then remember that your soul is a thousand times more frightful than your body.”

The Crow, tickled with the very civil language of the Fox, nestled and wriggled about, and hardly knew where she was.

‘Writer,’ screamed the Ink above his liquid, ‘Writer, which does the Most work, the Pen or Me?’

The boy, forgetting himself in a moment of alarm, was heard to exclaim: ‘Run, granny, run; run for your life!’