Darling recognized the voice of Candour, and in a burst of fury he turned to rush at her and devour her, but no one was to be seen, and the voice continued:

“Your rage and your evil intentions are powerless to disturb me. Your pride needs still to be humbled, so I am going to put you under the power of your own subjects.”

Darling turned from the fountain which showed him his horrible form so plainly, and thought he would hide himself in the wood, but he fell into a hole which had been dug to trap bears. Some hunters who were hiding in the branches of a tree came down, and, having chained him, led him to his own capital city. On the way, instead of being sorry for the conduct which had brought him to such a pass, he cursed the fairy in his heart, bit his chains, and gave himself over to fury. 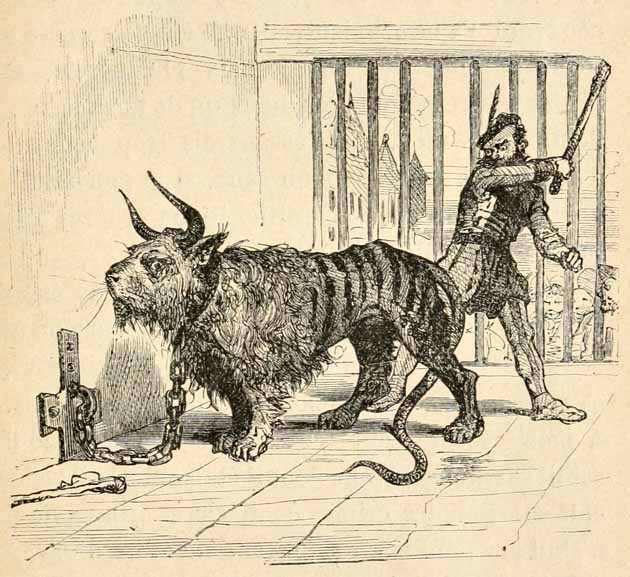 As he and his captors neared the city they noticed that some great event was being celebrated. The hunters asked some passers-by what it meant. They replied:

“The people are rejoicing because Prince Darling, who treated his subjects so badly, has been killed in his room by a thunderbolt.” For such was the popular belief. “The gods,” they added, “could no longer endure his crimes and his wickedness, so they have rid the earth of him. Four great lords, who were his companions in vice, made an attempt to seize the throne and share the kingdom between them, but the people, knowing that it was they who had ruined their King, set upon them and killed them. The good lord Suliman, whom the Prince had condemned to death, has been crowned King, and the event is being celebrated as a National Deliverance, for Suliman is a good man, and will restore peace and plenty to our country.”

Darling felt ready to burst with rage when he heard all this, but he had a greater trial to face when they arrived at the great square in front of the palace, where, on a superb throne, sat Suliman, surrounded by crowds who shouted loudly:

“Long live King Suliman! May he have many years of happiness to enable him to repair the evil wrought by his predecessor!”

Suliman stood up and made a sign with his hand to the noisy multitude, who immediately disposed themselves to listen in silent respect. Then he said:

“I accept the Crown you offer me for the time being, but I do so to preserve it for your rightful King, my former pupil, Prince Darling. He is not dead, as you suppose. A fairy has told me this, and perhaps you and I may yet have the pleasure of seeing him turn from his evil ways and become again the good, kind man that nature intended him to be. Alas! he was led astray by flatterers. I knew him well, and his heart was good. He would have been a father to his subjects had it not been for those who were around him, who poisoned his mind with evil thoughts and set him a bad example. You and I must hate his vices, but we must be sorry for him and pray that he may repent of his wrongdoing, and may be restored to his right mind. For myself I should be only too happy if, by shedding my blood, I could see him again on the throne, with the good character and good desires which would enable him to reign worthily.”

This speech cut Darling to the heart. He saw clearly how sincere and how faithful this good man’s friendship had been, and, for the first time, he saw clearly how wicked his own conduct had been, and blamed himself for the misfortune that had come upon him. As soon as this better mood began, his fury was calmed, and he began to reflect on the many wrong things he had done. His shame was great, and he confessed to himself that he had deserved an even greater punishment than had been laid on him. He ceased struggling to get out of the iron cage in which he was now chained, and became as quiet as a lamb. His captors took him to a great building where all the wild animals and monstrous creatures were kept, and they chained him in one of the compartments.

Darling resolved to begin to mend his ways at once, and his first step in the right direction was taken when he became quite docile and obedient to his keeper. The man was a brutal bully who beat the creatures under his care without rhyme or reason whenever he was in a bad temper, and Darling’s gentleness did not save him from many a cruel blow. One day, when the fellow had fallen asleep, a tiger broke its chain and sprang on him to tear him to pieces. For a moment Darling was tempted to rejoice that the tiger was going to rid him of his persecutor, but next moment a feeling of pity for the unfortunate wretch made him wish he could free himself to go to his assistance—he wished to render good for evil, by saving the keeper’s life.

Just as the desire arose, Darling found his cage was open. He flew to the assistance of the man who was struggling to defend himself against the tiger. The wretched man thought his last hour had come when this other monster bounded toward him, but his fear was changed to joy when he saw it strangle the tiger and then come to lie down at his own feet. The man was filled with gratitude, and was bending over to pat the head of the monster which had saved his life, when he heard a voice saying:

“No good action goes without its reward.”

At the same time he found there was no monster to be caressed, but in its stead a very handsome little dog, which licked the hand stretched out to pat him.

One day the sovereign prince said to his sons: ‘My dear boys, take each of you an arrow, draw your strong bow and let your arrow fly; in whatever court it falls, in that court there will be a wife for you.’

‘I once heard the old people say that behind the village, near the dark forest, there is buried a treasure, yes, a great treasure, but it is buried under a large, heavy stone, too heavy a stone for one man to move.’

The Old Man with a Wart

The old man could not sit still. He sprang into the midst of the group and began to dance. He seemed to be dancing like the trees and flowers. Like a willow by the river he bent and swayed and bowed.

The Lion, finding the insect would not be brushed away, was fain to accept the challenge; so to it they went.