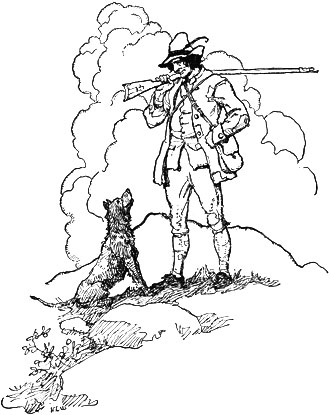 A posthumous writing of Diedrich Knickerbocker

The following tale was found among the papers of the late Diedrich Knickerbocker, an old gentleman of New York, who was very curious in the Dutch history of the province and the manners of the descendants from its primitive settlers. His historical researches, however, did not lie so much among books as among men; for the former are lamentably scanty on his favorite topics, whereas he found the old burghers, and still more their wives, rich in that legendary lore so invaluable to true history. Whenever, therefore, he happened upon a genuine Dutch family, snugly shut up in its low-roofed farmhouse under a spreading sycamore, he looked upon it as a little clasped volume of blackletter, and studied it with the zeal of a book-worm.

The result of all these researches was a history of the province during the reign of the Dutch governors, which he published some years since. There have been various opinions as to the literary character of his work, and, to tell the truth, it is not a whit better than it should be. Its chief merit is its scrupulous accuracy, which indeed was a little questioned on its first appearance, but has since been completely established; and it is now admitted into all historical collections as a book of unquestionable authority.

The old gentleman died shortly after the publication of his work, and now that he is dead and gone, it cannot do much harm to his memory to say that his time might have been much better employed in weightier labors. He, however, was apt to ride his hobby his own way; and though it did now and then kick up the dust a little in the eyes of his neighbors, and grieve the spirit of some friends for whom he felt the truest deference and affection; yet his errors and follies are remembered “more in sorrow than in anger,” and it begins to be suspected that he never intended to injure or offend. But, however his memory may be appreciated by critics, it is still held dear by many folk whose good opinion is well worth having; particularly by certain biscuit-bakers, who have gone so far as to imprint his likeness on their new-year cakes, and have thus given him a chance for immortality almost equal to the being stamped on a Waterloo medal or a Queen Anne’s farthing.

By Woden, God of Saxons,

From whence comes Wensday, that is Wodensday,

Truth is a thing that ever I will keep

Unto thylke day in which I creep into 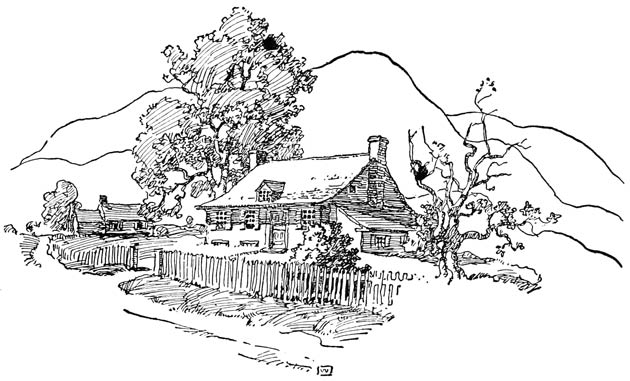 Whoever has made a voyage up the Hudson must remember the Kaatskill Mountains. They are a dismembered branch of the great Appalachian family, and are seen away to the west of the river, swelling up to a noble height and lording it over the surrounding country. Every change of season, every change of weather, indeed, every hour of the day, produces some change in the magical hues and shapes of these mountains, and they are regarded by all the good wives, far and near, as perfect barometers. When the weather is fair and settled, they are clothed in blue and purple, and print their bold outlines on the clear evening sky; but sometimes, when the rest of the landscape is cloudless, they will gather a hood of gray vapors about their summits, which in the last rays of the setting sun will glow and light up like a crown of glory. 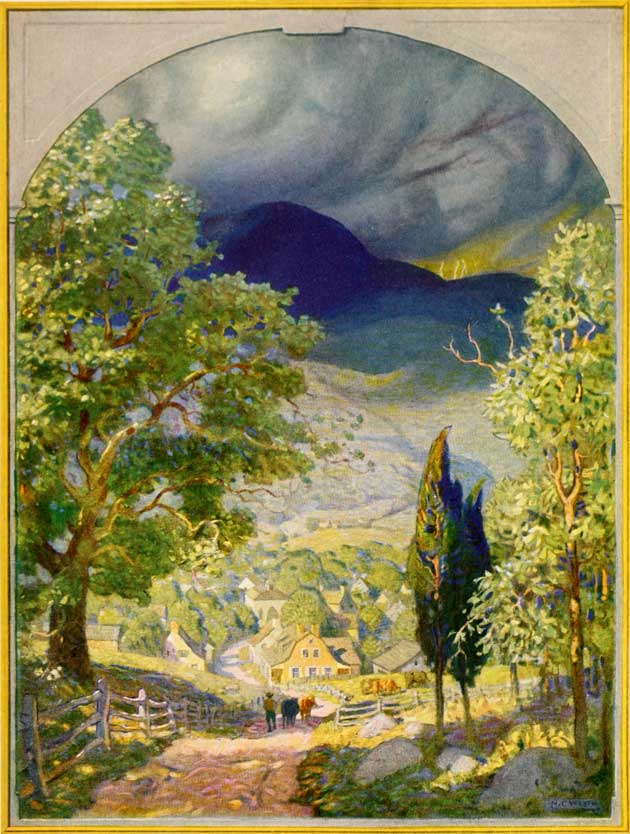 A village in the Catskill Mountains

At the foot of these fairy mountains the voyager may have descried the light smoke curling up from a village, whose shingle roofs gleam among the trees just where the blue tints of the upland melt away into the fresh green of the nearer landscape. It is a little village of great antiquity, having been founded by some of the Dutch colonists in the early times of the province, just about the beginning of the government of the good Peter Stuyvesant (may he rest in peace!), and there were some of the houses of the original settlers standing within a few years, built of small yellow bricks brought from Holland, having latticed windows and gable fronts surmounted with weathercocks.

In that same village, and in one of these very houses (which, to tell the precise truth, was sadly time-worn and weather-beaten), there lived many years since, while the country was yet a province of Great Britain, a simple good-natured fellow of the name of Rip Van Winkle. He was a descendant of the Van Winkles who figured so gallantly in the chivalrous days of Peter Stuyvesant and accompanied him to the siege of Fort Christina. He inherited, however, but little of the martial character of his ancestors. I have observed that he was a simple good-natured man; he was, moreover, a kind neighbor and an obedient henpecked husband. Indeed, to the latter circumstance might be owing that meekness of spirit which gained him such universal popularity; for those men are most apt to be obsequious and conciliating abroad who are under the discipline of shrews at home. Their tempers, doubtless, are rendered pliant and malleable in the fiery furnace of domestic tribulation, and a curtain lecture is worth all the sermons in the world for teaching the virtues of patience and long-suffering. A termagant wife may therefore, in some respects, be considered a tolerable blessing; and if so, Rip Van Winkle was thrice blessed. 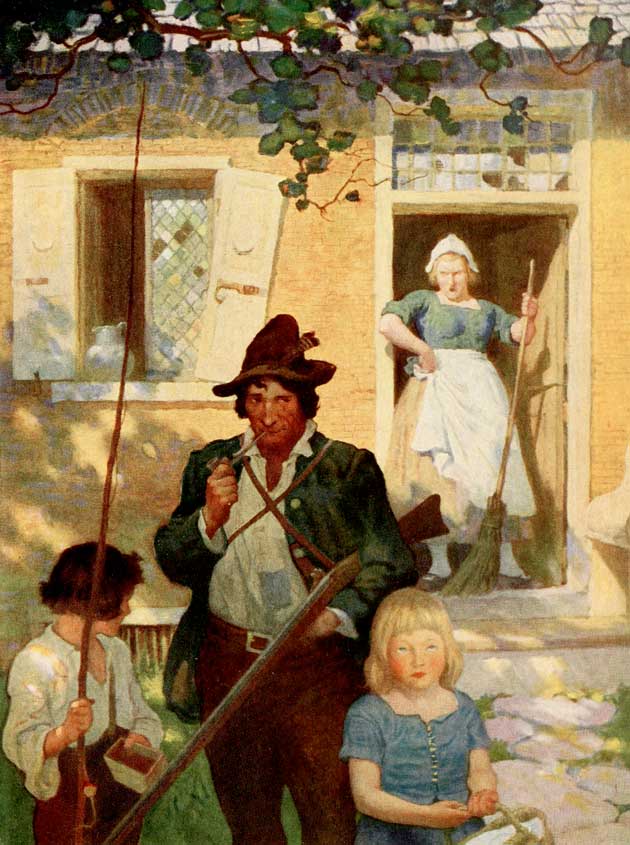 A termagant wife may therefore, in some respects, be considered a tolerable blessing; and if so, Rip Van Winkle was thrice blessed.

Certain it is that he was a great favorite among all the good wives of the village, who, as usual with the amiable sex, took his part in all family squabbles, and never failed, whenever they talked those matters over in their evening gossipings, to lay all the blame on Dame Van Winkle. The children of the village, too, would shout with joy whenever he approached. He assisted at their sports, made their play-things, taught them to fly kites and shoot marbles, and told them long stories of ghosts, witches, and Indians. Whenever he went dodging about the village he was surrounded by a troop of them, hanging on his skirts, clambering on his back, and playing a thousand tricks on him with impunity; and not a dog would bark at him throughout the neighborhood.

The great error in Rip’s composition was an insuperable aversion to all kinds of profitable labor. It could not be from the want of assiduity or perseverance; for he would sit on a wet rock, with a rod as long and heavy as a Tartar’s lance, and fish all day without a murmur, even though he should not be encouraged by a single nibble. He would carry a fowling-piece on his shoulder for hours together, trudging through woods and swamps and up hill and down dale, to shoot a few squirrels or wild pigeons. He would never refuse to assist a neighbor even in the roughest toil, and was a foremost man at all country frolics for husking Indian corn or building stone fences; the women of the village, too, used to employ him to run their errands, and to do such little odd jobs as their less obliging husbands would not do for them. In a word, Rip was ready to attend to anybody’s business but his own; but as to doing family duty and keeping his farm in order, he found it impossible.