Content warning. This story features ideas or uses words or phrases that are offensive.

THE VOYAGES AND TRAVELS OF SINDBAD THE SAILOR,
GIVING A FULL ACCOUNT OF HIS SEVEN WONDERFUL VOYAGES 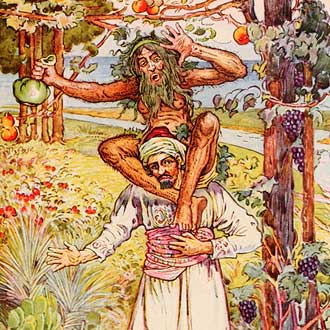 Sindbad’s life is full of peril,
Full of shipwrecks, full of famine;
Full of riches of great worth,
Full of every thing but truth.

During the reign of the Caliph Haroun Alraschid, there lived in the city of Bagdad a poor porter named Hindbad. One day, when the weather was excessively hot, Hindbad was employed to carry a heavy burden to a great distance from that part of the city where he lived. Being faint with the heat and very weary, and having still a great way to go, he entered a street where a refreshing breeze blew on his face, and the pavement was sprinkled with rose-water. Glad to find such a resting-place, he laid down his load, and seated himself beside it, near to a great house.

The windows of the house were open, and Hindbad was regaled with the smell of the richest perfumes that came from within. Presently he heard a delightful concert of all kinds of musical instruments, mixed with the finest voices, and the melodious notes of nightingales and other rare birds. Hindbad had never been in that quarter of the town before, and he felt a great desire to know to whom this magnificent house belonged. Seeing a servant standing at the gate in a splendid livery, he advanced towards him, and with great humility inquired the name of the master of the house.

“Is it possible,” said the servant, “that you are an inhabitant of Bagdad, and do not know that this is the house of Sindbad the Sailor, that famous traveller who has sailed round the world!”

Poor Hindbad, who had often heard of the wonderful riches of Sindbad the Sailor, and whose condition he thought was as happy as his own was deplorable, turned away sorrowfully, and sitting down again beside the great load he had to carry, he cried aloud, “Alas! what a difference between this fortunate man and me! I am every day exposed to the greatest fatigues, and all the wretchedness of extreme poverty. Scarcely can I earn sufficient of the coarsest barley bread for the support of myself and family, while happy Sindbad profusely expends immense riches, and leads a life of continual ease and pleasure. O heavens! what has he done to obtain a lot so fortunate? and why am I condemned to so much wretchedness?” Thus saying, Hindbad, overcome with sorrow, threw himself upon the ground and wept bitterly.

While the poor man was thus indulging his grief, a servant came from the house, and taking him by the arm, told him that Signior Sindbad wished immediately to speak to him. Hindbad was greatly alarmed at this message, thinking that Sindbad had heard his lamentations, and was going to reproach or punish him; he, therefore, tried to excuse himself from entering the house, saying, that he was in haste, and that he could not leave his burden in the open street. Sindbad’s servant, however, would not take a refusal, because his master’s commands had been absolute; and calling another domestic to look after the goods, he led the porter into a great hall, where a large company sat round a table covered with all sorts of dainties served in dishes of silver and gold. At the upper end of the table sat Sindbad, a comely, venerable gentleman with a long white beard.

Hindbad’s terror increased at the sight of so many people, and he trembled and hung back, till Sindbad, in the most courteous manner imaginable, desired him to draw near; and placing him in a chair on his right hand, served him from the choicest dishes, and gave him excellent wine in a crystal goblet.

When the porter had made an end of his dinner, Sindbad inquired his name and occupation. “My name, Signior,” said he, “is Hindbad, and I am nothing but a poor porter.”

“Well, Hindbad,” rejoined the master of the house, “I and my friends here are very glad to see you: but I sent for you on account of some words I heard you utter, as I was standing near that window.”

“Alas! Signior,” exclaimed Hindbad, rising from his chair, and blushing exceedingly, “I confess that my weariness and the heat of the day put me out of humour, and made me speak many indiscreet things, which I beg you to pardon.”

“My good friend,” replied Sindbad, “I am not so unjust as to be offended with you, on the contrary, I pity your condition; and when I commanded you to be brought hither, it was that I might convince you I did not attain to this happy condition without enduring more sufferings, and encountering greater dangers than can be well imagined. Yes, gentlemen,” he added, looking round the table upon his guests, “I assure you my difficulties were so extraordinary, that they were sufficient to discourage the most covetous man from running the same perils in pursuit of riches; and to convince you of the truth of what I assert, I will, if you are disposed to hear me, relate the history of the extraordinary adventures I met with in the course of my Seven Voyages.”

This proposal was highly acceptable to the whole company; and Sindbad having ordered a servant to carry Hindbad’s load to the appointed place, commenced his narration as follows.

From The voyages and travels of Sindbad the sailor: giving a full account of his seven wonderful voyages. Derby: Thomas Richardson.

Marriott was a lawyer who piqued himself on the brutal qualification of a voracious appetite, and a powerful digestive faculty.

It started when Peter began to listen to the other farmers boast of the money each was making and the triumphs they were winning over one another.

Worthy, ah! your very Worth lies in your Not Asserting it.