It was the middle of winter, and the snow-flakes were falling like feathers from the sky, and a Queen sat at her window working, and her embroidery-frame was of ebony. And as she worked, gazing at times out on the snow, she pricked her finger, and there fell from it three drops of blood on the snow. And when she saw how bright and red it looked, she said to herself, “Oh that I had a child as white as snow, as red as blood, and as black as the wood of the embroidery-frame!”

Not very long after she had a daughter, with a skin as white as snow, lips as red as blood, and hair as black as ebony, and she was named Snow-White. And when she was born the Queen died.

After a year had gone by the King took another wife, a beautiful woman, but proud and overbearing, and she could not bear to be surpassed in beauty by any one. She had a magic looking-glass, and she used to stand before it, and look in it, and say,

Looking-glass upon the wall,
Who is fairest of us all?

And the looking-glass would answer,

You are fairest of them all.

And she was contented, for she knew that the looking-glass spoke the truth. 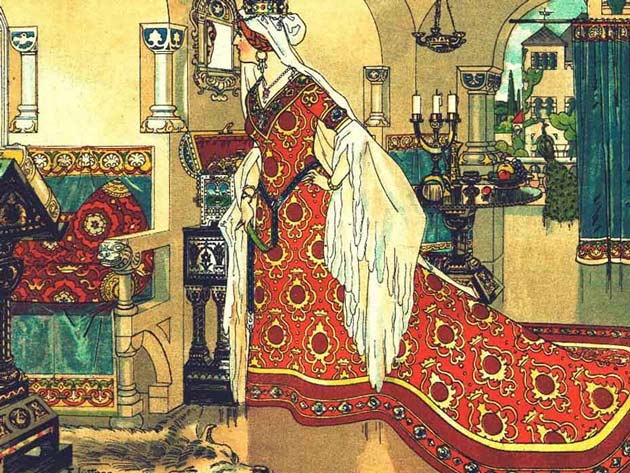 Now, Snow-White was growing prettier and prettier, and when she was seven years old she was as beautiful as day, far more so than the Queen herself. So one day when the Queen went to her mirror and said,

Looking-glass upon the wall,
Who is fairest of us all?

Queen, you are full fair, ’tis true,
But Snow-White fairer is than you.

This gave the Queen a great shock, and she became yellow and green with envy, and from that hour her heart turned against Snow-White, and she hated her. And envy and pride like ill weeds grew in her heart higher every day, until she had no peace day or night. At last she sent for a huntsman, and said, “Take the child out into the woods, so that I may set eyes on her no more. You must put her to death, and bring me her heart for a token.”

The huntsman consented, and led her away; but when he drew his cutlass to pierce Snow-White’s innocent heart, she began to weep, and to say, “Oh, dear huntsman, do not take my life; I will go away into the wild wood, and never come home again.”

And as she was so lovely the huntsman had pity on her, and said, “Away with you then, poor child”; for he thought the wild animals would be sure to devour her, and it was as if a stone had been rolled away from his heart when he did not put her to death. Just at that moment a young wild boar came running by, so he caught and killed it, and taking out its heart, he brought it to the Queen for a token. And it was salted and cooked, and the wicked woman ate it up, thinking that there was an end of Snow-White. 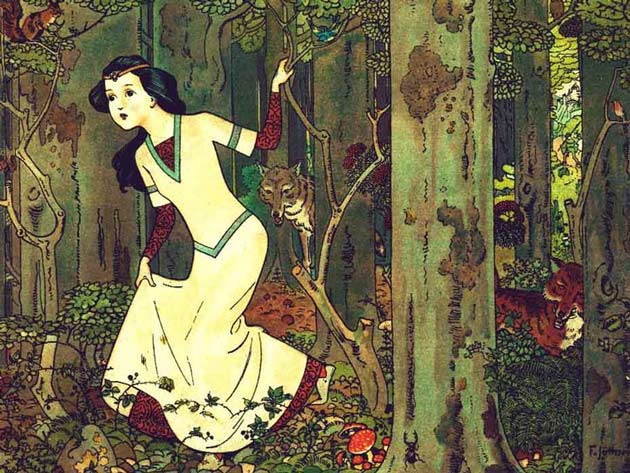 Now, when the poor child found herself quite alone in the wild woods, she felt full of terror, even of the very leaves on the trees, and she did not know what to do for fright. Then she began to run over the sharp stones and through the thorn bushes, and the wild beasts after her, but they did her no harm. She ran as long as her feet would carry her; and when the evening drew near she came to a little house, and she went inside to rest.

Find stories similar to Snow-White and the Seven Dwarfs

‘Your pearls and jewels, and your golden crown are not for me,’ answered the frog; ‘but if you would love me, and have me for your companion, then would I dive below the water and fetch you your golden ball again.’

Leopard and Wolf promised the ants that on their return they would spread a feast for them. Unfortunately, Spider heard the invitation and made up his mind to benefit by it.