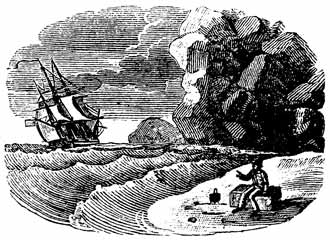 Those who are accustomed in their early days to do wrong, will with difficulty be persuaded to do right when they shall be grown to the age of maturity. The parents of Robinson left him early to the guidance of his own will, and, as he loved play better than his book, his youthful days passed without any attention being paid to the improvement of his mind. Those hours which ought to have been spent in some useful study, were squandered away among idle boys in the street, to his own detriment, and the disgrace of his fond parents.

One day, as Robinson was walking about the port of New-York, the place of his nativity, he met with one of his old companions, whose father was master of a ship, and who was then on the point of sailing for London. The young sailor persuaded Robinson to go with him, which he did without taking leave of his parents, and thereby committed a rash and wicked action.

The wind was favourable, they weighed anchor and proceeded on their voyage.—Robinson soon lost sight of the land, and nothing was left to his view but the ship in which he was sailing, the water beneath, and the sky above.

The two following days, the winds and weather proved favourable; but, on the third, the heavens began to be overcast, and every thing seemed to forebode an approaching storm. The air sometimes appeared to be on fire, and dreadful peals of thunder followed the vivid flashes of lightning; the rain fell in torrents, and the wind blew the billows of the ocean to a tremendous height. One moment the vessel appeared mounting to the clouds, and the next moment as if descending to the lowest regions: sometimes it lay on one side, and sometimes on the other.

All on a sudden, crack! crack! went the deck. “Heaven have mercy on us!” cried the sailors, who turned pale with terror, and lifted up their eyes to heaven. “What is the matter?” said Robinson, who was already half dead with fear. “Ah!” replied the seamen, “we are lost; a clap of lightning has shivered our mizen mast to pieces, and our main mast is equally in danger.” “We are lost!” exclaimed another voice from the inside of the ship: “we have sprung a leak, and we have already four feet water in the hold.” 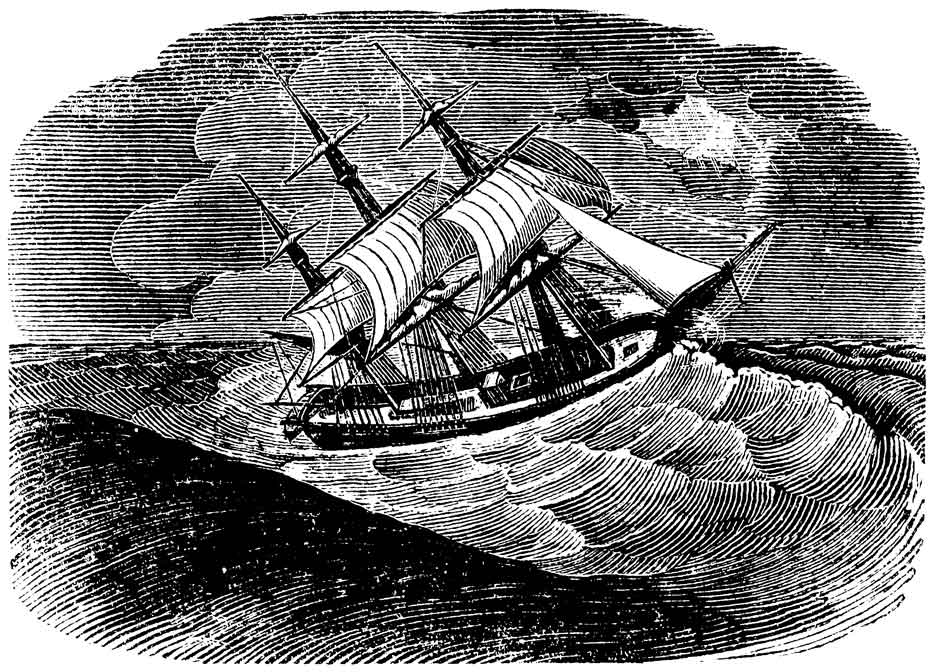 At these words, Robinson, who was seated on the cabin floor, fell into a swoon, and entirely lost his senses. All the crew ran to the pumps, and exerted all the force they were masters of, to keep the ship from sinking. The captain fired signals of distress, which awakened Robinson from his swoon, but soon threw him into a worse state, when he supposed it to be the noise occasioned by the ship’s foundering.

After some time, a large boat came to their assistance; but it was with great difficulty, on account of the dreadful waves, that they could get on board of it: and Robinson must have perished, had not a compassionate sailor thrown him on board of the boat. They had rowed but a short distance from the ship when they saw it sink. Fortunately, at this instant, the wind abated, otherwise the boat, loaded as it was, must have been overwhelmed in the waves. However, after many dangers, they reached the ship to which the boat belonged, and were all taken on board.

The ship that had received them then set sail for England, and, in a few weeks entered the mouth of the river Thames, and soon after anchored in the port of London. They then went on shore, happy in the idea of having escaped with their lives.

Robinson amused himself for a few hours in reviewing some parts of this great city; but his stomach telling him he stood in need of something to eat, he went in search of the master of the vessel, who received him kindly, and made him sit down to the table with him.

After dinner, the captain asked him what business brought him to London; when he replied that pleasure was his only motive, and at the same time confessed, that he had undertaken the voyage unknown to his parents. When the captain heard this, he appeared much shocked, and advised him to return immediately to his native country, and at the knees of his parents to implore their forgiveness.

Our imprudent adventurer then took his leave of the captain; but, as he was going to enquire for a ship, different ideas crowded on his mind. “If I now return (said he to himself,) my parents will punish me for leaving them, and my companions will laugh at me for having seen only two or three streets in London.”

On reaching the quay, he found no ship ready to sail for United States, he met with the captain of a Guineaman, who very kindly invited him to take a cup of tea on board of his ship, and Robinson accepted the invitation. The consequence of this meeting was, that Robinson agreed to go to Guinea with the captain: and, at that moment, he totally forgot his parents friends, and country.

They accordingly set sail with every appearance of a pleasant passage, they had passed by Calais, cleared the channel, and got into the Atlantic Ocean, without any accident. The wind, however, now changed, and was so violent, that it blew them on the coast of America.

They had not sailed long on the coast, when they heard the report of cannon: and as they were at some distance from the land, they concluded they were signals of some ship in distress. They therefore steered their course towards the report of the guns, and soon discovered, by a flame at a distance, that it was a ship on fire, which soon blew up, and nothing more was heard or seen of her. The captain, however, bent his course that way, and continued his signals, hoping he might thereby pick up some of the crew, who had probably taken to their boats. It fortunately so happened, that the crew of the unfortunate ship, directed by the signal guns of the Guineaman, come up with her, and were all saved.

The good and generous captain, having safely conveyed to Newfoundland the people he had saved, pursued his voyage to Guinea with a favourable wind, and arrived safe at Madeira, carrying with him thither the crew of another ship he had met with in the greatest distress.

As the captain was obliged to stop here some time, in order to repair his ship, which had been damaged by the storm, Robinson, in a few days, began to be tired of inactivity, and wished for wings that he might, as quick as thought, fly over the whole universe.

During this interval, a Portuguese ship arrived from Lisbon, bound to Brazil: and Robinson, getting acquainted with the captain, heard him talk so much of gold and precious stones, that he conceived the most ardent desire to go there, and load his pockets with those valuable articles.