He then informed his good friend, the captain, that he intended to sail in the Portuguese ship to Brazil. As the captain had just learned from Robinson himself that he had left his parents without their knowledge, he was very glad to get rid of him, fearing he should have no success while so impious a youth was on board. He therefore gave him leave to depart, gave him some money, and the best advice he could. Robinson took a kind leave of his friend, went on board the Portuguese ship, and sailed for the Brazils.

The voyage proved agreeable for several days; at last, a violent storm blew from the south-east.

After weathering the storm seven days, a sailor cried out with excess of joy, that he saw land, which brought every one on deck. This joy, however, was of short duration; for they ran upon a bed of sand, where they remained fixed, and exposed to the furious waves, which rolled over the ship in vast bodies.

All on a sudden the cry was general that the ship was filling with water. Every one instantly flew on deck, the long boat was handed out with incredible haste, and every one endeavoured who should first get in. The boat was so loaded, that it was easy to foresee, that it would never reach the shore, which was at a considerable distance. In fact a monstrous wave was seen rolling towards them, which buried them all in the bosom of the deep.

The boat being thus overset, Robinson and the rest of the ship’s company were exposed to the mercy of the ocean; but the same wave that overset them carried Crusoe with it and threw him on the shore. He was thrown against a piece of rock with such violence, that the pain awoke him from the swoon into which terror had thrown him. He opened his eyes, and seeing himself on land, he exerted all his efforts to gain the height of the shore. 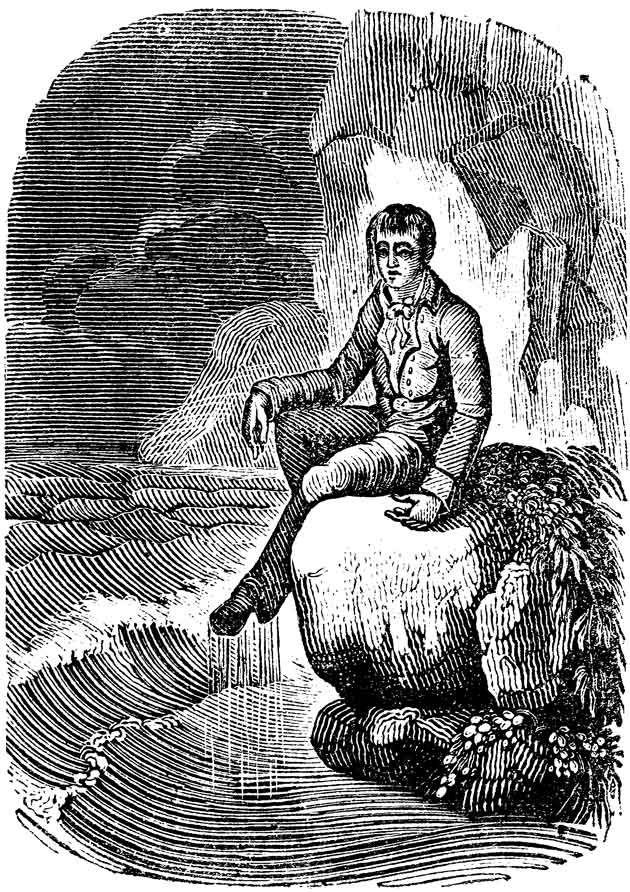 When he had recovered himself, he rose to look round. Good God, what a sight! The ship, the boat, and his companions, had all disappeared! nothing remained but a few planks of the ship, which the waves had thrown on shore. Himself was the only one who had escaped death.

Weary and fatigued he wished to find some place where he might enjoy a little repose; but no hut was in view, nor could he find any place so secure as that of the birds, who passed their evenings in the trees. He clambered up into one, and there passed the night, having properly secured himself from falling while sleeping.

In the morning he descended from the tree, in search of food, having eaten nothing the preceding day; but his searches were vain, nothing presented itself that the human stomach could digest. He threw himself on the ground, shed a torrent of tears, and wished he had perished in the sea, rather than be left to die a miserable death by famine.

He was now forming in his mind by what means he should put an end to his miserable existence, without waiting the tediousness of dying with hunger, when he saw a sea falcon devouring a fish he had taken, and said to himself, “If God furnishes these birds with food, he will not suffer me to die with hunger.” This idea renewed his spirits, and he exerted himself to walk along the sea shore.

At last perceiving some shells lying on the sand, he ran to them, and to his inexpressible joy found they were oysters.

Though these saved him from perishing with hunger, yet he knew not where to take his nocturnal abode, secure from savages and wild beasts, if such were there. His last night’s lodging had been so uncomfortable, that he dreaded repeating the experiment. “What will it serve,” said he to himself, “that I have escaped the fury of the sea, and have found something to keep me from dying with hunger, If I am at last to be devoured by wild beasts?”

“Poor unfortunate wretch that I am!” exclaimed he, at the same time lifting up his trembling hands to heaven, “Is it then true, that I am separated from all human beings, and that I must remain here without hopes of ever being taken from this desert island!”

His attempts to discover a place where he might repose in safety, were for a long time ineffectual; but at last he came to a small mountain, the front of which was as perpendicular as a wall. He examined this side with great attention, and found in it a little hollow place, to which the entrance, was very narrow.

As he had neither pick-axe nor chisel, with which he might easily have increased the dimensions of the hollow place, he set his head to work how to supply the want of them. He observed that there were several willow trees near the spot; these he pulled up by the roots, with great difficulty, in order to plant them at the entrance of his intended cavern, and thereby make his habitation more comfortable and secure.

He rose the next morning at break of day, when he hastened to the shore to appease his hunger with oysters, and then return to his labours. Having pursued a different route this morning, he, in his way to the shore, had the good fortune to meet with a tree that bore large fruit. He indeed knew not what they were, but hoped to find them good to eat, and immediately knocked down one.

It was a nut of a triangular form, as large as the head of a small child. The outer bark was composed of threads, resembling hemp in appearance. The second bark, on the contrary, was as hard as a shell of a tortoise; and Robinson soon discovered that this would supply the place of a bason. The contents were a moist substance, which tasted like sweet almonds, and in the midst of it, which was hollow, something like milk, of a sweet and agreeable flavour. This was indeed a most glorious repast to the half famished Robinson. It was the cocoa-nut.

His empty stomach could not be contented with one single nut, but he knocked down a second, which he ate with the same eagerness. His joy on this discovery filled his eyes with gratitude. The tree was very large, but it was the only one he saw in the place.

He carried with him some oysters to serve him for his dinner, and he went cheerfully to his labour. He had collected, on the borders of the sea, some large shells, which served him instead of a spade, and which very much accelerated his business. He soon afterwards discovered a tree, the inner bark of which formed a good substitute for cords or threads.

He then continued his work with great assiduity, and planted tree against tree until he had formed a strong palisade before his intended habitation. Every night and morning he watered his little plantation from the neighbouring rivulet, and for that purpose made use of the cocoa-nut shell. He soon had the pleasure to see his little plantation in a thriving condition, and very beautiful to the view.

Having hitherto succeeded to his wishes, he began to think in what manner to hollow out the little cavity in the rock, so as to make it big enough for his use. As he knew it would be in vain to attempt it with his hands alone, he set about looking for some tool that might assist him in his operation.

It was not long before he met with a large and sharp stone, which not only resembled a hatchet with a sharp edge, but had even a hole in it to receive a handle. After repeated trials, he fixed a handle to it, and gave it all the appearance of the tool so much wanted.—Searching further among the stones, he found one that answered the purpose of a chisel, and others that proved excellent substitutes for a mallet.

The Squirrel and the Spider

Squirrel appealed to the law, but the court decided that no one had ever had a farm without a road leading to it, therefore the fields must be Spider’s.

The rat squeaked so softly that Little Black Ant said to him, ‘Mr. Ratsmith, I will marry you.’