By the assistance of these tools his work was so far advanced, in the course of a few days, that he had made sufficient room to lie in comfortably. He collected a sufficient quantity of grass, of which he made hay by exposing it to the sun; and of this made his bed.

Robinson, in order that he might not forget the order of the days, and to know when Sunday returned, invented a new kind of Almanack. As he had neither paper, nor any thing else to write on, he made choice of four trees that stood close together, and whose barks were smooth. On the largest of the four trees, he every night made a mark with a sharp stone, to shew that the day had passed. When seven marks had been made, he made a stroke through them all, and this was a mark for a week. Every time that he had made four marks in the second tree, he knew that one month had passed, for which he made one mark on the third tree. When he had made twelve marks on the third tree, he then made one on the fourth, which denoted the year being completely finished.

Necessity obliged him to make large excursions into the island, in pursuit of the indispensable necessaries of life.

Robinson rose in the morning with the sun, and prepared for his tour. He hung his pouch to a string, which he threw across his shoulders, put his hatchet instead of a sword, into his belt, and began his march.

His first visit was to his cocoa-nut tree, on order to supply his pouch with two nuts. Having supplied himself with this excellent provision, he went in search of some oysters; and being supplied with these matters, to be eaten only in case of necessity, he took a hearty draft of water, and then proceeded on his journey.

At last he came to a brook, where he resolved to sit down and dine. He seated himself under a large tree, whose spreading boughs afforded a shade to a great distance, and joyfully regailed himself. But in the midst of his repast, and all on a sudden, a distant noise terribly alarmed him. He looked around him on all sides, and at last perceived a whole troop of savage animals approaching him, which had some resemblance to our sheep, except that they had a hump on their backs, which, on that account, made them resemble little camels. These are called lamas—they are beasts of burden, and peculiar to some parts of South America.

Robinson, having killed one of these creatures with his hatchet, threw it across his shoulders, and was carrying it home to his cavern, when, in his way thither, to his great joy, he discovered seven or eight citron trees, whose ripe fruit had fallen to the ground. He carefully collected them, and carried them home to his habitation.

With a sharp stone he skinned the lama, whose flesh he so far roasted in the sun, as to make it eatable; and some of his citrons squeezed into water afforded him an excellent and refreshing liquor. The skin he hung up to dry, and of this hereafter intended to make himself shoes.

Robinson slept very soundly this night, and was angry with himself for lying so long. He was going out in order to make war on the lamas, but heaven prevented; for he had no sooner put his head out of his cavern, than he was obliged to return. It rained so violent that the ground was covered with water, and this accompanied with the most dreadful thunder, which broke with such violence on the rock, that it seemed to shake it to the very foundation. This so terrified poor Crusoe, who, from a want of proper education, was naturally timid and superstitious, that he ran out of his cavern, and fell down in a swoon.

He remained for some time in a state of insensibility; but, on recovering himself, found the rain, thunder, and lightning, had ceased.

During the thunder storm, a flash of lightning had set fire to a large piece of wood, which had kept burning for a considerable time. Robinson now rejoiced to find that he had obtained some fire, and even from that very event which had before given him so much uneasiness. He immediately set about to keep up the fire constantly, and for that purpose built a kind of stone chimney, in his new habitation. He watched his fire attentively, that it might not go out, so that he could now roast the flesh of his lamas, in a manner fit for human creatures to eat.

Going one day to the borders of the sea to collect oysters, he could find only a few; but, instead of them, discovered what gave him infinitely more satisfaction. Though he had never eaten of them himself, he had heard that they were wholesome and delicious food.—This was a fine large turtle, which weighed nearly an hundred pounds.

Robinson, with some difficulty, carried the turtle home to his habitation, by the assistance of his hatchet penetrated the under shell, dressed a part of it for his dinner, and made of it a most sumptuous feast. As he could not possibly eat it all at once, he was at loss how to preserve it from putrefaction.

Necessity had taught him wisdom; and, as he had neither tub nor salt, he set his head to work, in what manner he should preserve the delicate food. He found the upper shell, which he had not broken, would supply the place of a tub, and nothing but salt was wanting.

“What a fool I am!” said Robinson to himself, “here is a plenty of sea-water, and that will supply the place of salt.” He filled his shell with sea-water, put the remainder of the turtle in it, and it was thus preserved from putrefaction.

These happy successes encouraged him to exert his genius in greater attempts. Wishing to have some living animal about him, and the lamas were the only animate beings except the spider, which he had seen on this island. But how he should get a pair of them alive into his possession was a great difficulty to surmount. He determined to form one of the ends of his cords into a noose, and throw this over the head of the first lama that should approach him.

He rose next morning early, and having furnished himself with his hatchet, provisions, and other things necessary, he proceeded in his design of catching lamas alive.

In the course of his journey he saw a pit at a distance, and advancing up to it, he found it was full of a white substance. How shall I express his joy, when, on tasting it, he found it to be excellent salt! He instantly filled his pockets with it. This discovery gave fresh spirits to Robinson, and he hastened to the spot where he hoped to trap a lama.

It was not long before he ensnared a female lama, which had two young ones, who, seeing their dam ensnared, came up without any appearance of fear, to Robinson, and licked his hands, meaning thereby, perhaps, that they wished their dam to be set at liberty. 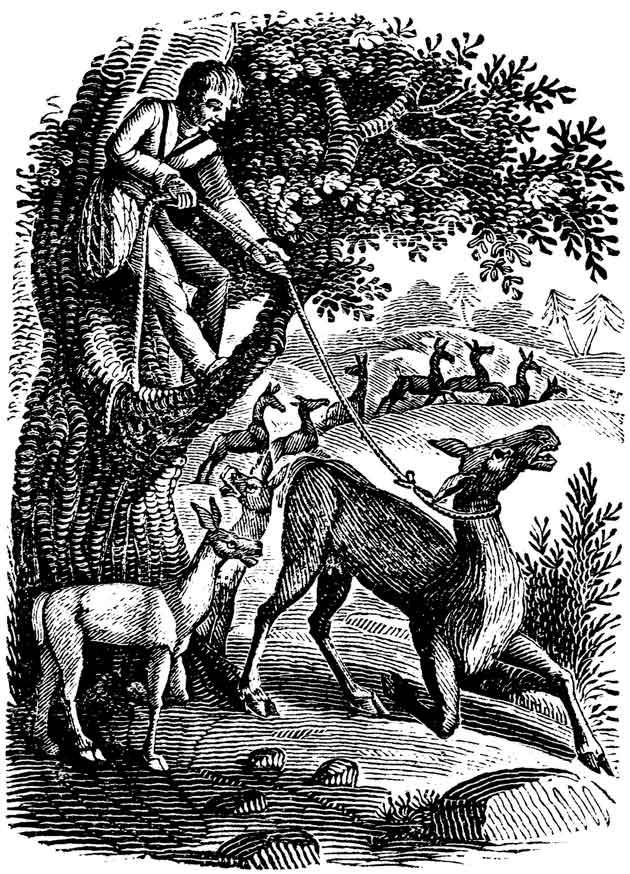 Robinson then dragged the old lama to his habitation, and there the two young ones of course followed her. On his arrival at his hut, he formed a little stall with bricks, into which he put the lama and her young ones. It is impossible to express the joy Robinson felt on having companions, even though they were not human.

‘Get up, wise man!’ repeated the chancellor in French. ‘Do you mean me?’ exclaimed Pinchauvas. And with one bound he stood up.

At last, as they were returning to the temple by way of the shore, the men-servants were startled by the sound of a biwa, furiously played, in the cemetery of the Amidaji.

He was born with a little tuft of hair upon his head, which made them call him Riquet with the Tuft, for Riquet was the family name.