One day as he was sitting full of thought, the idea struck him to explore other parts of the island, as he had seen but a small part of it; he determined therefore to proceed on his tour; the next morning he loaded one of his lamas with four days provisions, equipped himself, and having implored the divine protection, set out on his journey.

He had reached the centre of the island when he saw the impression of human feet on the sand, at which he grew pale and motionless, concluding that if there were inhabitants on the island, they could be only savages or cannibals, not less to be dreaded than the beasts of the forest. A little further he discovered a pit, in which were evident marks of a fire extinguished, and about it were scattered the hands and feet, sculls and other bones of human creatures, the remains of a horrible and unnatural repast.

He returned home and put his habitation in the best state of defence, and cut a subterraneous passage from his house, through which he might escape in case of an attack.

Some years passed without any thing material occurring. One clear and serene morning, he perceived the smoke rising at a distance; his fright was followed by curiosity, and he hasted to the top of the hill, at the foot of which was his grotto; he there clambered a high tree, from which he discovered several canoes fastened to the shore, and savages dancing round a great fire; presently two poor creatures were dragged from the canoes, one of the savages knocked one of them down, and two others fell immediately upon him to cut him to pieces and prepare for a feast. The other captive, while the savages were butchering his companion, took to flight, and ran with great swiftness near to Robinson’s habitation.

Robinson descended the tree and proceeded to the spot where the fugitive had concealed himself. Robinson made signs for him to follow him, which he did with evident marks of fear. In a little time the fears of the indian were removed, and he made Robinson to understand that he was willing to become his slave, for though he understood not the language of the Indian, he was charmed with the sound of a human voice, to which he had long been a stranger. 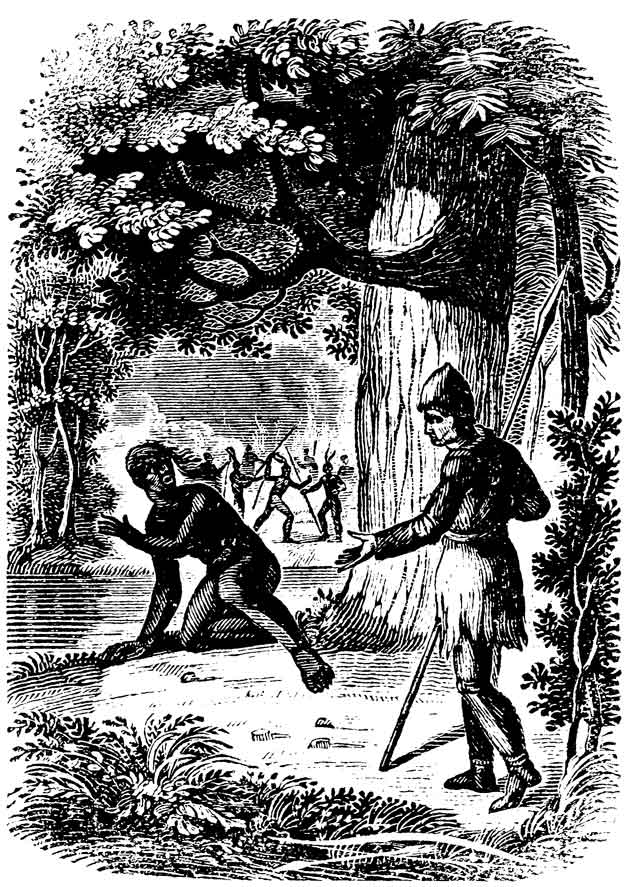 As this affair happened on a Friday, Robinson gave to his companion the name of Friday. He gave him a skin to cover himself with, and made him set down by him. Friday obeyed in the most respectful manner, offering a lance to Robinson, and holding the point to his own breast, in token of absolute submission to his will.

Robinson, ever since his arrival on this island, had experienced no felicity like the present; all his fears centered in the idea, that the savages might return in quest of their victim, and demolish his habitation.

He therefore set about making his cottage as strong as possible, by throwing up entrenchments around it, and fortifying it with all the methods he could devise. During this time Robinson endeavoured to learn Friday something of the English language, and the man seemed no less desirous. In less than six months he made such progress, that he could make himself tolerably well understood.

One morning as Robinson was walking towards the sea-shore, he was much pleased with the sight of a ship, though at a great distance. Robinson soon perceived her to be an American vessel, which was steering for the island, and soon came to anchor. Surprise, fear, and joy, seized Robinson by turns, and also his attendant, Friday. The sight of a vessel, which might take him off that island, gave him joy; but this was succeeded by surprize and fear, because he could not comprehend the motive that could bring a ship on these coasts; but supposed she must have been driven out of her course by tempestuous and contrary winds. This turned out as Robinson supposed; they cast anchor near the island, and sent their boat on shore in search of fresh water, and were much surprised at finding a white man on an island in so desolate a part of the globe.

Robinson was quite overjoyed at the prospect he now had of once more returning to his native home, and the great pleasure he enjoyed in the company and conversation of man, from whom he had been so long separated. After taking in a small supply of water, they set off for the ship, with Robinson and his companion. The next day they again went on shore for more water: Robinson now took from his cabin such things as he thought might be useful to him on the passage; he then took a last farewell of his habitation, and the water cask being filled, they all returned on board, and the ship sailed. 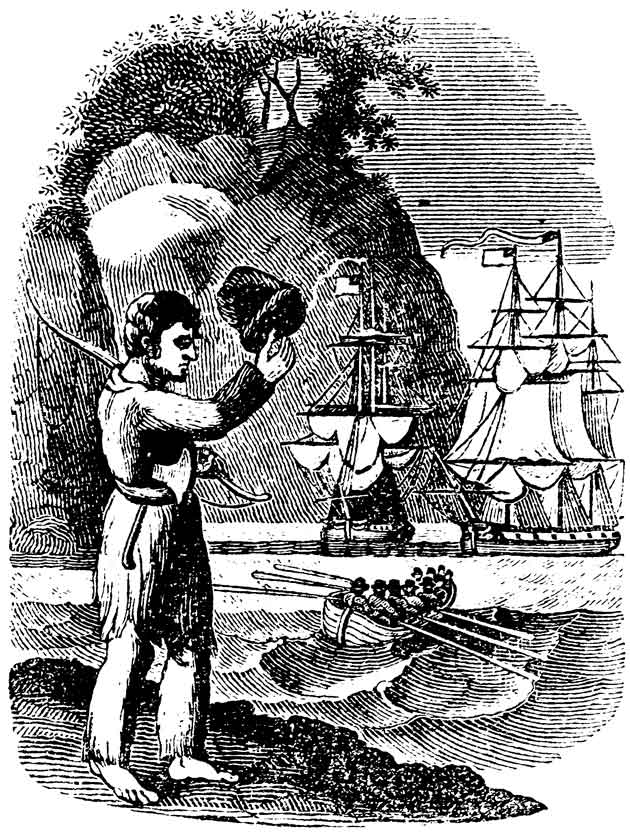 A favourable voyage at length brought him in sight of his native country, and the heart of Robinson was expanded with joy; when, suddenly, a violent tempest arose which in spite of all the efforts of the seamen drove the ship on a sand bank, and forced away the keel and part of the hold. The water rushed in with such violence, that the only chance of escaping was in the boat, in which they happily reached the shore.

When he came in sight of his native city, he could not help shedding tears. He had already learned that his mother, whom he so tenderly loved, had paid the debt of nature. On his arrival at New-York, he hastened to an inn, and thence sent a messenger to prepare his father for the reception of his supposed lost son. The messenger had orders to tell the father, that a person had arrived with news from his son, who would be with him in a few days. The supposed stranger was introduced, and after a short interview, declared himself his son.—Let my readers judge, for it is impossible to describe, how great was the tenderness of this meeting.

Friday, astonished at scenes so entirely new to him, gaped about him in silence, without being able to fix his attention on any particular object. In the mean time, the arrival of Robinson, and his surprising adventures, engrossed the conversation of all companies; every one wished to see him and hear his history, and he was employed from morning to night, in relating his adventures. 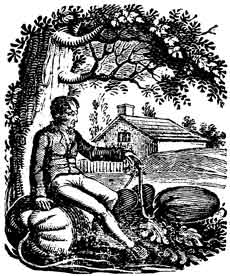 Beauty could not help shuddering when she saw the horrible face of the frightful creature, but she made a brave effort to overcome her fear.

A great tumult arose at the banquet on account of his taking away the cup, and all the guests pursued him, but the peasant escaped by the fleetness of the beast he rode.