Long ago, in a part of the country not very remote from Kioto, the great gay city, there dwelt an honest couple.

In a lonely place was their cottage, upon the outskirts of a deep wood of pine trees. Folks had it that the wood was haunted. They said it was full of deceiving foxes; they said that beneath the mossy ground the elves built their kitchens; they said that long-nosed Tengu had tea-parties in the forest thrice a month, and that the fairies’ children played at hide-and-seek there every morning before seven. Over and above all this they didn’t mind saying that the honest couple were queer in their ways, that the woman was a wise woman, and that the man was a warlock which was as may be.

But sure it was that they did no harm to living soul, that they lived as poor as poor, and that they had one fair daughter. She was as neat and pretty as a princess, and her manners were very fine; but for all that she worked as hard as a boy in the rice-fields, and within doors she was the housewife indeed, for she washed and cooked and drew water. She went barefoot in a grey homespun gown, and tied her back hair with a tough wisteria tendril. Brown she was and thin, but the sweetest beggar-maid that ever made shift with a bed of dry moss and no supper.

By-and-by the good man her father dies, and the wise woman her mother sickens within the year, and soon she lies in a corner of the cottage waiting for her end, with the maid near her crying bitter tears.

“Child,” says the mother, “do you know you are as pretty as a princess?”

“Am I that?” says the maid, and goes on with her crying.

“Do you know that your manners are fine?” says the mother.

“Are they, then?” says the maid, and goes on with her crying.

“My own baby,” says the mother, “could you stop your crying a minute and listen to me?”

So the maid stopped crying and put her head close by her mother’s on the poor pillow.

“Now listen,” says the mother, “and afterwards remember. It is a bad thing for a poor girl to be pretty. If she is pretty and lonely and innocent, none but the gods will help her. They will help you, my poor child, and I have thought of a way besides. Fetch me the great black rice-bowl from the shelf.”

The girl fetched it.

“See, now, I put it on your head and all your beauty is hidden away.” 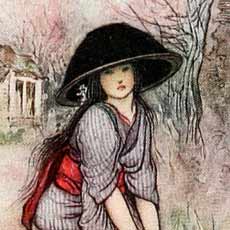 “It will save you from what is heavier to bear,” said the mother. “If you love me, promise me that you will not move it till the time comes.”

“I promise! I promise! But how shall I know when the time comes?”

“That you shall know… And now help me outside, for the sweet morning dawns and I’ve a fancy to see the fairies’ children once again, as they run in the forest.”

So the child, having the black bowl upon her head, held her mother in her arms in a grassy place near the great trees, and presently they saw the fairies’ children threading their way between the dark trunks as they played at hide-and-seek. Their bright garments fluttered, and they laughed lightly as they went. The mother smiled to see them; before seven she died very sweetly as she smiled.

When her little store of rice was done, the maid with the wooden bowl knew well enough that she must starve or go and find more. So first she tended her father’s and mother’s graves and poured water for the dead, as is meet, and recited many a holy text. Then she bound on her sandals, kilted her grey skirts to show her scarlet petticoat, tied her household gods in a blue printed handkerchief, and set out all alone to seek her fortunes, the brave girl!

For all her slenderness and pretty feet she was a rarely odd sight, and soon she was to know it. The great black bowl covered her head and shadowed her face. As she went through a village two women looked up from washing in the stream, stared and laughed.

“Out upon her,” cries the other, “for a shameless wench! Out upon her false modesty to roam the country thus with her head in a black bowl, as who should cry aloud to every passing man, ‘Come and see what is hidden!’ It is enough to make a wholesome body sick.”

On went the poor maid, and sometimes the children pelted her with mud and pebbles for sport. Sometimes she was handled roughly by village louts, who scoffed and caught at her dress as she went; they even laid hands upon the bowl itself and sought to drag it from her head by force. But they only played at that game once, for the bowl stung them as fiercely as if it had been a nettle, and the bullies ran away howling.

The beggar-maiden might seek her fortune, but it was very hard to find. She might ask for work; but see, would she get it? None were wishful to employ a girl with a black bowl on her head.

At last, on a fine day when she was tired out, she sat her upon a stone and began to cry as if her heart would break. Down rolled her tears from under the black bowl. They rolled down her cheeks and reached her white chin.