A wandering ballad-singer passed that way, with his biwa slung across his back. He had a sharp eye and marked the tears upon the maid’s white chin. It was all he could see of her face, and, “Oh, girl with the black bowl on your head,” quoth he, “why do you sit weeping by the road-side?” 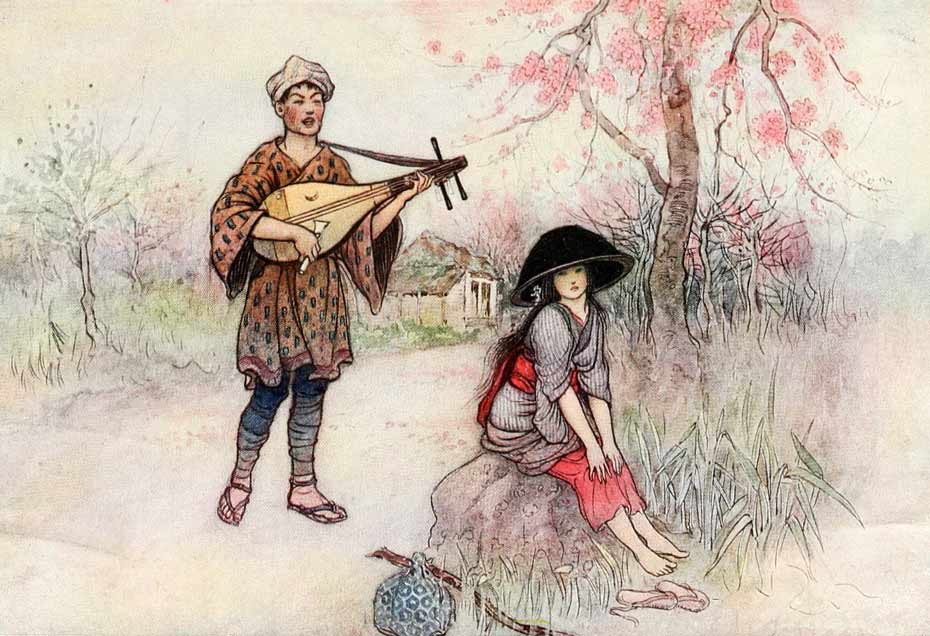 “I weep,” she answered, “because the world is hard. I am hungry and tired… No one will give me work or pay me money.”

“Now that’s unfortunate,” said the ballad-singer, for he had a kind heart; “but I haven’t a rin of my own, or it would be yours. Indeed I am sorry for you. In the circumstances the best I can do for you is to make you a little song.” With that he whips his biwa round, thrums on it with his fingers and starts as easy as you please. “To the tears on your white chin,” he says, and sings:

“Sir, I do not understand your song,” said the girl with the bowl on her head.

“Yet it is plain enough,” said the ballad-singer, and went his way. He came to the house of a passing rich farmer. In he went, and they asked him to sing before the master of the house.

“With all the will in the world,” says the ballad-singer. “I will sing him a new song that I have just made.” So he sang of the wild cherry and the great black cloud.

When he had made an end, “Tell us the interpretation of your song,” says the master of the house.

“With all the will in the world,” quoth the ballad-singer. “The wild cherry is the face of a maiden whom I saw sitting by the wayside. She wore a great black wooden bowl upon her head, which is the great black cloud in my song, and from under it her tears flowed like rain, for I saw the drops upon her white chin. And she said that she wept for hunger, and because no one would give her work nor pay her money.”

“Now I would I might help the poor girl with the bowl on her head,” said the master of the house.

“That you may if you wish,” quoth the ballad-singer. “She sits but a stone’s throw from your gate.”

The long and short of it was that the maid was put to labour in the rich farmer’s harvest-fields. All the day long she worked in the waving rice, with her grey skirts kilted and her sleeves bound back with cords. All day long she plied the sickle, and the sun shone down upon the black bowl; but she had food to eat and good rest at night, and was well content.

She found favour in her master’s eyes, and he kept her in the fields till all the harvest was gathered in. Then he took her into his house, where there was plenty for her to do, for his wife was but sickly. Now the maiden lived well and happily as a bird, and went singing about her labours. And every night she thanked the august gods for her good fortune. Still she wore the black bowl upon her head.

At the New Year time, “Bustle, bustle,” says the farmer’s wife; “scrub and cook and sew; put your best foot foremost, my dear, for we must have the house look at its very neatest.”

“Indeed we are, and many of them,” says the farmer’s wife. “My son that is in Kioto, the great and gay, is coming home for a visit.”

Presently home he comes, the handsome young man. Then the neighbours were called in, and great was the merry-making. They feasted and they danced, they jested and they sang, many a bowl of good red rice they ate, and many a cup of good saké they drank. All this time the girl, with bowl on her head, plied her work modestly in the kitchen, and well out of the way she was—the farmer’s wife saw to that, good soul! All the same, one fine day the company called for more wine, and the wine was done, so the son of the house takes up the saké bottle and goes with it himself to the kitchen. What should he see there but the maiden sitting upon a pile of faggots, and fanning the kitchen fire with a split bamboo fan!

“My life, but I must see what is under that black bowl,” says the handsome young man to himself. And sure enough he made it his daily care, and peeped as much as he could, which was not very much; but seemingly it was enough for him, for he thought no more of Kioto, the great and gay, but stayed at home to do his courting.

His father laughed and his mother fretted, the neighbours held up their hands, all to no purpose.

“Oh, dear, dear maiden with the wooden bowl, she shall be my bride and no other. I must and will have her,” cried the impetuous young man, and very soon he fixed the wedding-day himself.

When the time came, the young maidens of the village went to array the bride. They dressed her in a fair and costly robe of white brocade, and in trailing hakama of scarlet silk, and on her shoulders they hung a cloak of blue and purple and gold. They chattered, but as for the bride she said never a word. She was sad because she brought her bridegroom nothing, and because his parents were sore at his choice of a beggar-maid. She said nothing, but the tears glistened on her white chin.

“Now off with the ugly old bowl,” cried the maidens; “it is time to dress the bride’s hair and to do it with golden combs.” So they laid hands to the bowl and would have lifted it away, but they could not move it.

“Try again,” they said, and tugged at it with all their might. But it would not stir.

“There’s witchcraft in it,” they said; “try a third time.” They tried a third time, and still the bowl stuck fast, but it gave out fearsome moans and cries.

They were forced to lead her as she was to the bridegroom’s presence.

“My dear, I am not afraid of the wooden bowl,” said the young man.

Then the black bowl burst asunder with a loud noise, and fell to the ground in a thousand pieces. With it fell a shower of silver and gold, and pearls and rubies and emeralds, and every jewel of price. Great was the astonishment of the company as they gazed upon a dowry that for a princess would have been rich and rare.

But the bridegroom looked into the bride’s face. “My dear,” he said, “there are no jewels that shine like your eyes.” 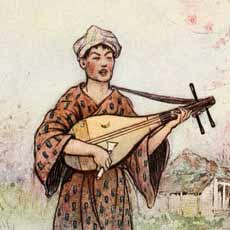 Unfortunately, Dabshelim, during this process of melting down his library, grew old, and saw no probability of living long enough to exhaust its quintessence to the last volume.

Church Mouse thought it was her Beloved Spouse, so she flew at him, scratched him, and Banged him Right and Left before he knew where he was.

The soldier drew his great bow and let an arrow fly at the monster’s head. He never missed his aim, and the arrow struck the ugly head of the centipede, but bounced away.