The Brown Man of the Moors

In the year before the great rebellion two young men from Newcastle were sporting on the high moors above Elsdon, and, after pursuing their game several hours, sat down to dine in a green glen, near one of the mountain streams. After their repast, the younger lad ran to the brook for water, and, after stooping to drink, was surprised, on lifting his head again, by the appearance of a brown dwarf, who stood on a crag covered with brackens across the burn. This extraordinary personage did not appear to be above half the stature of a common man, but was uncommonly stout and broad-built, having the appearance of vast strength. His dress was entirely brown, the colour of the brackens, and his head covered with frizzled red hair. His countenance was expressive of the most savage ferocity, and his eyes glared like those of a bull. 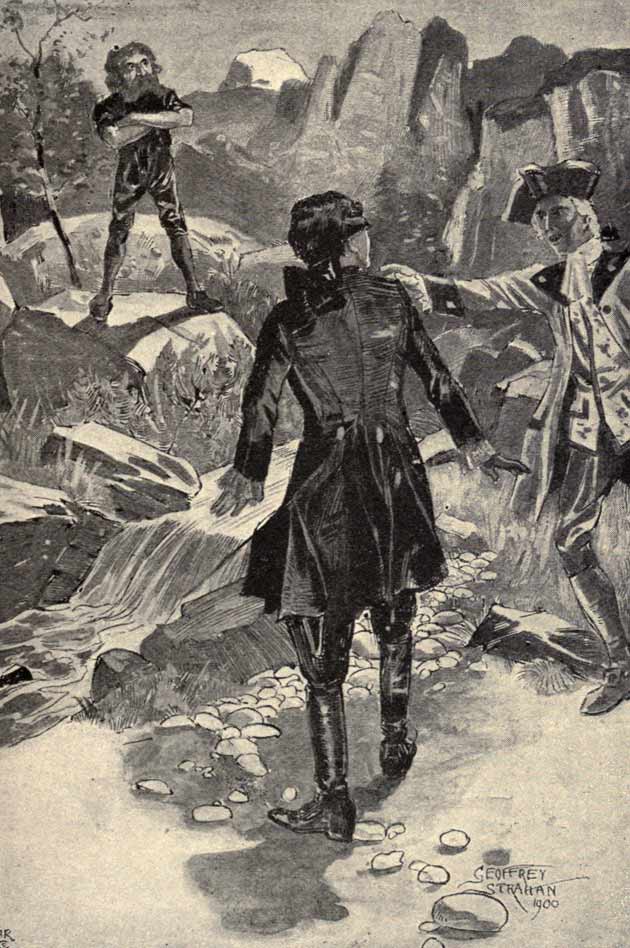 His foot was arrested by the voice of his companion

It seems he addressed the young man, first threatening him with his vengeance for having trespassed on his demesnes, and asking him if he knew in whose presence he stood. The youth replied that he supposed him to be the lord of the moors; that he had offended through ignorance; and offered to bring him the game he had killed. The dwarf was a little mollified by this submission, but remarked that nothing could be more offensive to him than such an offer, as he considered the wild animals as his subjects, and never failed to avenge their destruction. He condescended further to inform the young man that he was, like himself, mortal, though of years far exceeding the lot of common humanity, and that he hoped for salvation. He never, he added, fed on anything that had life, but lived in the summer on whortle berries, and in winter on nuts and apples, of which he had great store in the woods. Finally, he invited his new acquaintance to accompany him home and partake his hospitality, an offer which the youth was on the point of accepting, and was just going to spring across the brook (which if he had done, the dwarf would certainly have torn him to pieces) when his foot was arrested by the voice of his companion, who thought he had tarried long. On his looking round again “the wee brown man was fled.”

The story adds that the young man was imprudent enough to slight the admonition, and to sport over the moors on his way homewards, but soon after his return he fell into a lingering disorder, and died within a year.