A great many years ago there lived in the county of Norfolk a gentleman and his lady. The gentleman was brave, kind, and of a noble spirit; and the lady was gentle, beautiful, and virtuous. They were very much loved by all who knew them; for they were always trying to do service to every body who came near them, or who had any thing at all to do with them.

This lady and gentleman lived together very happily for many years, for they loved each other most tenderly. They had two children, who were as yet very young; for the eldest, who was a boy, was but three years old, and the youngest, who was a girl, not quite two years old. The boy was very much like his father, and the girl was like her mother.

By the end of this time the gentleman fell sick, and day after day he grew worse. His lady, as I have just said, loved him with the greatest fondness; and she was so much grieved by his illness that she fell sick too. No physic, nor any thing else, was of the least use to them, for their illness got worse and worse; and they saw that they should soon be taken away from their two little babes, and be forced to leave them in the world without a father or mother.

They bore this cruel thought as well as they could; and trusted, that after they were dead, their children would find some kind friend or another to bring them up. They talked to one another tenderly about them and at last agreed to send for the gentleman’s brother, and give their darlings into his care.

As soon as ever the gentleman’s brother heard this news, he made all the haste he could to the bed-side where the father and mother were lying sick.

“Ah! brother,” said the dying man, “you see how short a time I can expect to live; yet, neither death, nor pain, can give me half so much grief as I feel at the thought of what these dear babes will do without a parent’s care. Brother, brother,” said the gentleman, putting out his hand as well all he could, and pointing to the children, “they will have none but you to be kind to them; none but you to see them clothed and fed, and teach them to be good and happy.”

“Dear, dear brother,” said the dying lady, “you must be father, mother, and uncle too, to these lovely little lambs. First let William be taught to read; and then he should be told how good his father was. And little Jane,— Oh! brother, it wrings my heart to talk of her: think of the gentle usage she will stand in need of, and take her fondly on your knee, brother, and she and William too will repay your care with love.” 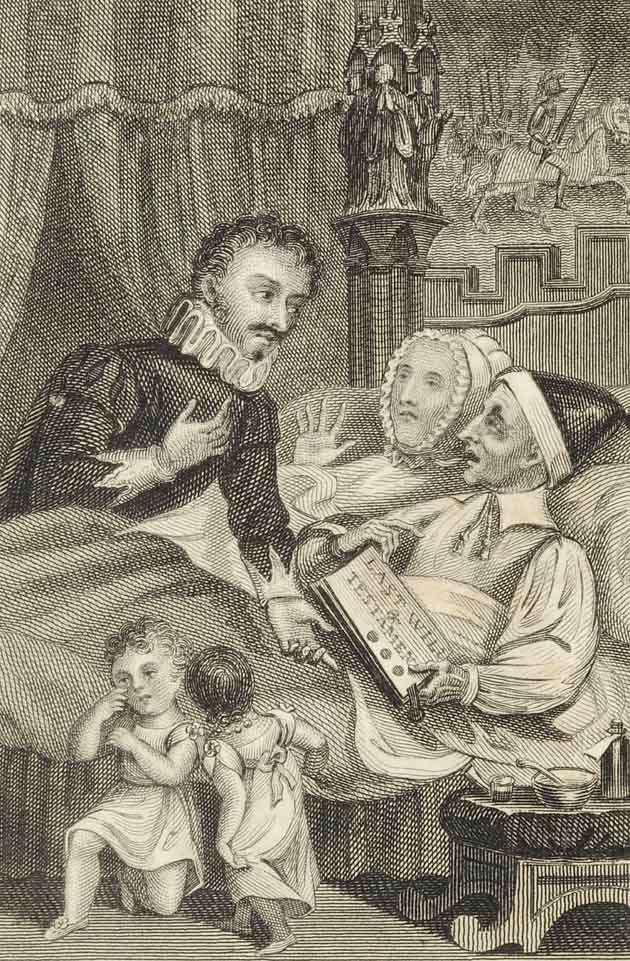 The uncle then answered, “Oh! how it grieves my heart to see you, my dearest brother and sister, in this sad state! but take comfort, there may still be hope of your getting well: yet if we should happen to lose you, I will do all you can desire for your darling children. In me they shall find a father, mother, and uncle. William shall learn to read; and shall be often told how good his father was, that he may turn out as good himself when he grows up to be a man. Jane shall be used with the most tender care, and shall be kindly fondled on my knee. But, dear brother, you have said nothing of the riches you must leave behind. I am sure you know my heart too well to think that I speak of this for any other reason than your dear children’s good, and that I may be able to make use of all your money only for their sake.”

“Pray, brother,” said the dying man, “do not grieve me with talking of any such thing; for how could you, who will be their father, mother, and uncle too, once think of wronging them? Here, here, brother, is my will. You will see how I have done the best I could for my babes.”

A few moments after the gentleman had said these words, he pressed his cold lips to the children; the lady did the same, and in a short time they both died.

The uncle shed a few tears at this sad sight, and then broke open the will; in which he found that his brother had left the little boy, William, the sum of three hundred pounds a year, when he should be twenty-one years old, and to Jane, the girl, the sum of five hundred pounds in gold, to be paid her the day of her being married. But if the children should happen to die before coming of age, then all the money was to belong to their uncle. The will of the gentleman next ordered that he and his dear wife should be buried side by side in the same grave.

From The Children in the Wood: a Tale for the Nursery.London: William Darton, Jun., 1819.